How 3D printing is moving markets and… NASA

Uptake of 3D printers has been impressive with a 33.8% compound annual growth rate over the past three years.

And investors are taking note, with more investment and capital being poured into 3D innovators to help them commercialise their products every day.

Even the CSIRO has got into the action opening a $6 million metal 3D printing centre in Victoria in May 2015.

Last year thebull.com.au hinted that 3D printing was the next big thing to come to the ASX.

And they weren’t wrong. The first to eye an ASX spot was Oz Brewing, a tiny beer brewer who decided to give up the amber to concentrate on 3D.

This type of interest was the start of a 3D printing revolution in Australia of the type that has been going on in the US for a little while longer. Publicly-listed companies on the US stock exchanges include: Stratasys (NASDAQ:SSYS), 3D Printing Systems (NYSE:DDD), ExOne (NASDAQ:XONE) and Voxejet Ag ADR (NYSE:VJET).

It’s a strong movement both in Australia and the US and 3D companies are growing in confidence and stature as more and more look to go public.

One Australian 3D start-up who is at the forefront of the 3D printing movement in this country is Aurora Labs. Aurora has been hard at work for the last year on a large scale metal 3D printer, that according to the company is 100 times the speed of other machines on the market.

In fact, Aurora recently announced the release of their Information Memorandum (IM) for a seed capital raising with Alto Capital to help them commercialise their consumer products.

The company is hoping to follow in the footsteps of companies such as US consumer-focused 3D printer company Robo3D who are the subject of an RTO by Falcon Minerals (ASX:FNN) and recently achieved record monthly revenues on the back of launching its printers into major US retail chain, Best Buy.

While 3D printers have piqued the interests of many corporate organisations, this one could actually turn interest into investment.

Especially if rumours are true and NASA gets involved.

Aurora Labs CEO David Budge told StartUp Smart, “They’re (NASA) interested in having a chat about what we’re up to, and they can see the advantages of using this technology. The main difference between ours and others in the market is ours can run at about 100 times faster with a similar resolution.”

NASA is interested in printing rocket engines which would be printed by Aurora’s large format 3D metal printer (LFP) at far better speeds than are currently available.

Budge says that Aurora’s printer could print a one tonne part in a day, where competitor printers take up to three to four months.

He believes the speed of the machine will make it commercially viable, particularly when you consider further interest has come from high-end electric motorcycle companies as well as others in the aerospace field. This includes a Silicon Valley start-up that wants to launch micro-satellites into orbit.

Despite most of the company’s products still at prototype stage, Budge has been in talks with several large US organisations about using this breakthrough 3D metal printing technology.

And they are also re-focusing on the consumer market with the hope of creating a printer the size of a microwave for every home. 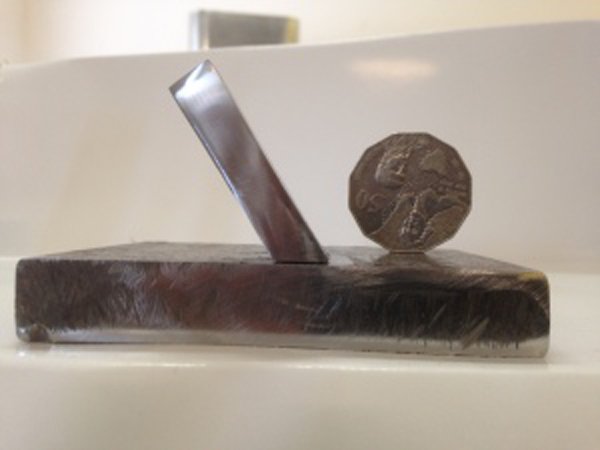 A printed slanting sample from Aurora.

There is also ASX-listed 3D Medical which recently signed a deal with Canadian Medical Imaging company Interlad to take its 3D printing surgical tools to the international market.

Aurora is planning an IPO in the first half of 2016 with details to be finalised closer to the date.

The current capital raising is intended to enable Aurora to complete the proof of concept prototype of the LFP.

It will also allow the company to go into full production of its other 3D printer models the S-Titanium and S-Titanium Pro while speeding delivery of units currently on back order.

“The list of what we can make is literally endless, from car parts to tools to rocket motors,” Budge told StartUp Smart last year.

“We can see a time when most homes and every manufacturer have one of these. It’s not too different than when you compare it to the first photocopiers, which were enormously expensive. So expensive they were licensed instead of being sold.

“I see 3D printing, particularly with metal and other materials expanding massively in the next five to 10 years,” Budge said.

“I see it resulting in the decentralisation of production for a lot of products.”

Which is great news for those in the 3D space who are looking to be the leaders of innovation in this space.