Too hot to handle – why solar is set to sizzle

Several elements to solar power are seductive, and not just for the ‘greenies’ out there. There are the cost savings, there’s the feeling of self-sufficiency and control over your energy supply, as well as the sense of moving with the times and embracing new technologies.

For many there is also a sense of satisfaction in the fact their energy source is not adding to Co2 emissions, in contrast to using fossil fuels.

The debate around renewables like solar power was for a long time revolving around jobs; what about the thousands of Australians working in fossil fuel industries?

With the renewable energy sector taking off at unprecedented speed, we hear more about new energy jobs.

This week’s news out of Port Augusta proves the point, with SA Premier Jay Weatherill announcing a $650 million solar thermal power plant will be constructed in the country town next year.

It will have a 150-megawatt capacity, and will be producing power by 2020 – supplying 100 per cent of the state government’s needs. “Importantly, this project will deliver more than 700 jobs, with requirements for local workers,” Weatherill said.

He also noted the solar thermal plant will be the biggest of its kind in the world.

QLD set to get on board green energy

SA is not the only state planting major seeds in the realm of solar energy. QLD’s Labour government has already stated its target of 50 per cent renewable energy by 2030; announcing in July its desire to be carbon neutral by the middle of the century. These ambitious targets will include the minimum roll out of one million-plus households with roof-top solar photovoltaic systems.

The state’s Environment Minister Steven Miles said Queensland had no choice but to progress towards zero emissions (through renewables like solar and wind power) particularly as climate change was already having such a devastating impact on the World Heritage status of its iconic Great Barrier Reef.

Is the private sector leading the way?

In many ways, it’s the private sector which is catching on quickest to the idea that solar energy is proving to be an excellent opportunity for profits. Private equity-backed Lyon Group is launching its own solar scheme in north-west Victoria, to the tune of $660 million. The combined solar and energy storage project will be built in the Sunraysia township of Nowingi.

“These things are happening despite governments, not because of them,” Lyon partner David Green said. “The private demand for renewable energy can’t be denied.”

The project will comprise 2.3 million solar panels, with a capacity of 250 megawatt, and provide the area with 250 new jobs.

Greatcell Solar is making good ground in the space, but still has a lot of work to do. As such interested investors should seek professional financial advice if considering this stock for their portfolio.

The 2016 World Economic Forum ranks Perovskite Solar Cells (PSC) in its top 10 emerging global technologies, so a sub-$100 million capped company like GSL is really pitching itself towards future markets.

While it may be in its early stages, it already has an existing agreement to collaborate with the CSIRO on PSC technology. Meanwhile, The Australian Financial Review listed GSL in its top five innovative companies of 2016.

These developments come at a time when we are seeing widespread discontent over energy prices.

Australia’s skyrocketing energy prices have been garnering plenty of attention lately, as the costs threaten not just ordinary households but major businesses struggling to budget to accommodate the bloated bills.

While the issue is being played out in the political arena, householders and business owners will look to address the problem as soon as possible, which means there’s never been a better time to become a provider of viable alternatives to gas and traditional electricity in Australia.

The below graph gives a snapshot of past uptake of solar panels, by country, and the projections for the year 2020: 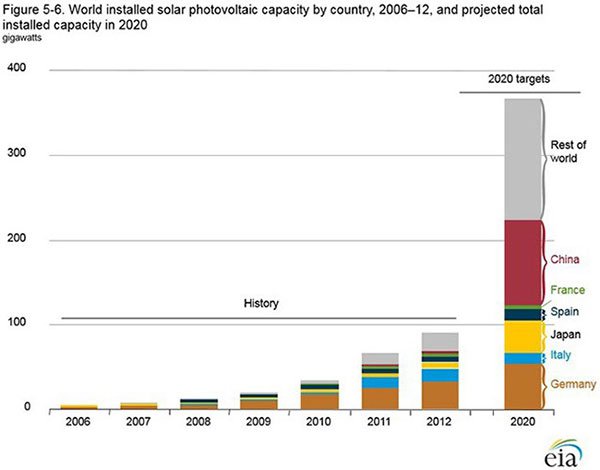 Given the abundance of sunshine we are known for in Australia, it’s no surprise that solar is really taking off, with the number of deals rising almost as fast as our traditional power bills.

While coal and other ‘dirty’ energy sources have provided the western world with the means to live in unprecedented comfort in the 20th century, as EnergyAustralia’s Mark Collette put it, it is now a “legacy technology”.

Wind and solar make up around eight per cent of our energy usage now (the rate is higher in SA), but by any calculation, that figure is set to rise sharply in the coming years.