Hold the phone, the ad is right in front of me and it’s life-size not screen size

The last 10 years has seen a complete shakeup of the media and advertising industry. Indeed, the transition away from print media started to gain traction even further back than that.

The shift from broadsheet newspapers and magazines to online media has been prompted by a number of factors. From a cosmetic perspective, the flashy digital presentation that can enhance media and advertising is certainly appealing.

In terms of meeting the needs of the masses, there is now an understanding that readers are time poor and media and advertising groups have determined that the more they can do to facilitate quick and easy transmission of messages to the client/consumer the better they will be heard.

Going hand-in-hand with these trends have been technological enhancements that facilitate this new era of engagement. The emergence and enhancements of iPads and iPhones and the like cater to the consumer’s needs.

However, in a sense nothing has changed. Media and advertising strategies still revolves around getting in the consumer’s face and in many cases making sure they return to that space. 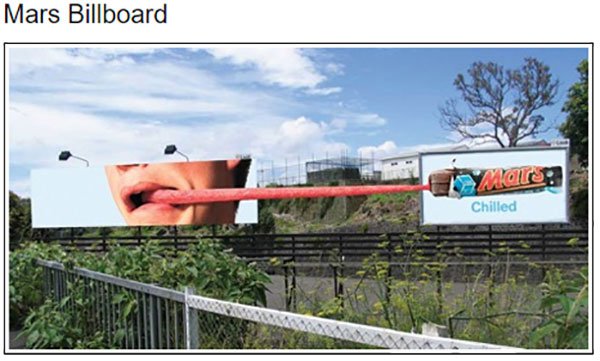 The key difference is capturing the time poor consumer’s attention and keeping them engaged for an optimum period of time – not necessarily a long time. This wasn’t such an issue in the past when readers kicked back on the porch with their newspaper or wandered through their favourite magazine on the bus when commuting to and from work.

It’s not all about the phone, just look outside of home

In looking to tap into companies that can take advantage of this trend, most investors have tended to opt for stocks that are somewhere along the value chain in generating content for mobile devices.

Of course these have included speculative stocks for which investors should seek professional financial advice for further information.

But what about the out-of-home media sector which encompasses advertising such as roadside billboards and street furniture and railway station digital displays, as well as freestanding digital advertising medium that is used in the likes of shopping malls.

The concept is similar and it meets the needs of the same audience. The consumer only needs a split second to read a billboard or a message on the side of a tram/bus when driving to work or walking along the footpath, or through an airport terminal.

The commuter sitting at a train station doesn’t have to fiddle with a phone – a rotating digital board that can carry numerous advertising messages is in their face. And for those with a regular routine, there is a good chance that same person will return to that space the next day where the same message will be reinforced, just the way advertisers like it.

FinFeed examines four companies that generate earnings from this mode of media presentation and advertising.

APN Outdoor Group (ASX: APO) is a leader in outdoor advertising in Australia and New Zealand with a premium portfolio of assets which have been targeted based on their quality and scalability.

The group reaches its outdoor audiences by four different categories and has a prominent presence in the roadside, transit and rail market segments.

It was only yesterday that APO announced it had successfully retained the Department of Planning, Transport and Infrastructure Adelaide Metro contract. This involves the advertising rights for nearly 900 buses, 24 trams and 136 train cars across the city and CBD.

The company has held this contract since 2005, and in commenting on its retention, APO’s Chief Executive Richard Herring said, “The Adelaide landscape is synonymous with trams, buses and trains and as a company we realise the importance of the continued relationship with the Department of Planning, Transport and Infrastructure.”

APO also extended the Sydney bus contract at the start of August, as well as negotiating a new agreement with digital transit technology company, XTD (ASX: XTD) which will see APO continue to act as the content sales agency for XTD’s digital screen networks in the Melbourne and Brisbane Metro rail networks.

As can be seen in the following table, APO has substantially increased its proportionate earnings from digital media over last three years.

APO is consistently considering options regarding merger and acquisition activity as part of its growth strategy. Consensus forecasts indicate that the company should generate compound annual earnings per share growth of nearly 10% over the next two years.

For most of last 12 months the company’s shares have traded in a range between $4.50 and $6.00, but they are currently sitting at the bottom of that range. The consensus 12 month price target is $5.60, perhaps suggesting there is room for share price upside.

It should be of course that share trading patterns should not be used as the basis for an investment as they may or may not be replicated. Those considering this stock should seek independent financial advice.

APO reports on a calendar year basis and the company is due to release its interim result on August 17, perhaps providing some share price direction, particularly now that recent important contracts have been renegotiated.

oOh!media (ASX: OML) is another prominent player in the out-of-home advertising space. OML is active in both the Australian and New Zealand markets where it is focused on providing location based media solutions similar to APO in that it in part targets venues such as airports, as well as roadside locations.

However, the company also has a diversified portfolio of static and digital signs across CBD office towers, cafes, fitness venues, bars and universities.

The company hit a 12 month low of $3.86 in July, but as would be expected, its recent inclusion in the S&P/ASX 200 had a positive impact resulting in its shares trading as high as $4.13.

Again, share trading patterns are not indicative of future performance and caution is required.

Inclusion in the ASX 200 provides companies with better exposure to institutional investment as many index bound fund managers can’t invest outside of the ASX 200.

This is also important in terms of management’s recent comments regarding its intention to invest between $35 million and $40 million in the conversion of signs to digital, as well as the development of business and data systems in order to continue deployment of its digital strategy. As an ASX 200 company it will arguably have better access to capital should this be required.

In May, APO provided underlying EBITDA guidance of between $88 million and $92 million. Analysts at Macquarie have set their guidance at the top end of this range. They are forecasting a profit of $34.5 million in fiscal 2017 (12 months to December 31, 2017), representing adjusted earnings per share of 27.5 cents.

This implies a PE multiple of 14.7 relative to the company’s current trading range. Macquarie has an outperform recommendation on the stock and a 12 month share price of $4.80, implying upside of approximately 20% to Friday’s closing price of $4.04.

Note that broker projections and price targets are only estimates and may not be met.

The company delivered a strong interim result for the six months to December 31, 2016 which featured EBITDA growth of 67% on the back of an increase of nearly 80% in revenues.

The following impressive financial metrics were responsible for an uptick in the company’s share price which has been sustained over the last six months while some of the larger players in the sector have tended to track sideways. 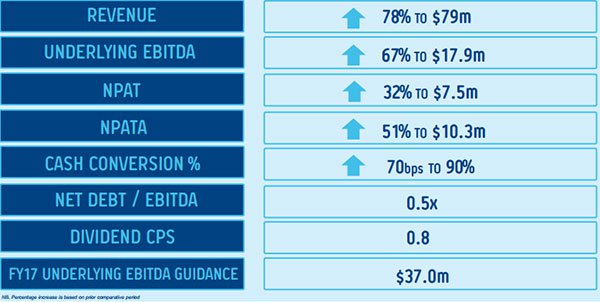 Management is expecting the company to slightly outperform the first half result in the six months to June 30, 2017, forecasting EBITDA of $37 million. This will include a part year contribution from the group’s sports acquisition.

QMS is making a concerted effort in terms of expanding its geographical coverage and audience. This has included its expansion into sports advertising, providing access to high value, engaged audiences in key markets such as Sydney and New Zealand.

The scale of the markets is also worth noting given the multi-million demographic engaged in sporting attendances and viewing of sports broadcasts. Management sees the prospect of fostering deeper audience engagement via coordinated campaigns across outdoor and in-stadia assets, digital (including social and mobile integration) and experiential.

The company has been a growth by acquisition story and fiscal 2016 acquired businesses, iSite, Omnigraphics NZ and ABSee will make a full year contribution in fiscal 2017.

The guidance also reflected the delivery of upgraded landmark digital billboard targets to more than 68 in fiscal 2017, as well as full-year contributions from billboards switched on in fiscal 2016.

As indicated below, QMS has an impressive digital pipeline in both Australia and New Zealand, paving the way for both a strong fiscal 2017 result and providing predictability of revenues in fiscal 2018.