Initial Public Offerings (IPOs) are the mechanism by which private companies first make their shares available for purchase by the general public. This is known as the “primary market”, and involves the company either selling their shares directly to investors in a “primary issue”, or by first passing the risk of distributing the shares to a financial organisation in a process known as “underwriting”. Once the shares have been issued, they will typically trade on a “secondary market” such as a stock exchange – which in Australia usually means the ASX.

Investing in IPOs can be incredibly lucrative, with even the largest and most valuable companies in the world at some point having a public issue, often at incredibly attractive prices. Indeed, if you had invested even a few thousand dollars into the IPOs of companies like Apple or Google, your positions would be worth millions of dollars today.

However it should be noted that IPOs are very high risk and this article is not intended as investment advice. Please seek professional financial advice before making any investment decision in any IPO or the companies mentioned in this article.

Less glamourous IPOs may also do exceptionally well, with JB Hi-Fi (which listed on the ASX in 2003) now trading at more than 1,200% of its IPO price; which is an exceptional result that doesn’t even take into account the company’s generous dividends.

Whilst it is true that not every IPO will outperform, historical analysis shows that IPOs will typically rise on their first day of listing. This is often called to as “under-pricing” and it refers to the first day return that an investor would achieve if they purchased the IPO. 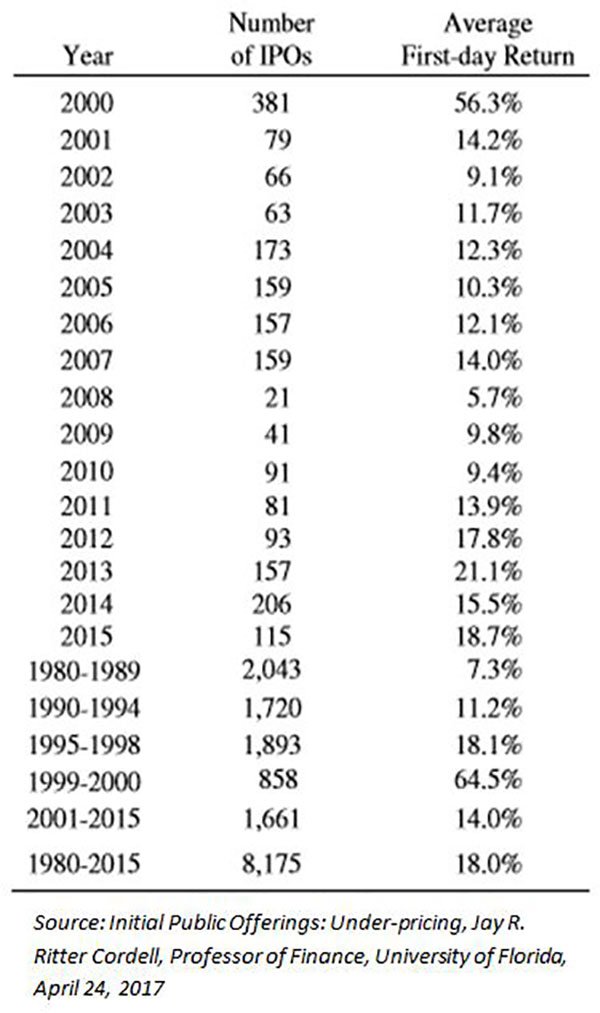 A study of more than 8,000 IPOs from US equity markets between 1980 and 2015 showed that the average first day return of an IPO was 18 percent. The data was compiled by “Mr. IPO” Jay R. Ritter, Cordell Professor of Finance at the University of Florida. His findings support the theory that the majority of IPOs are under-priced, which may be due to any number of reasons.

Under-pricing may occur as a deliberate attempt to generate additional interest in a stock when it first becomes publically traded. However, this is a bit of a balancing act, because if the IPO is too heavily under-priced, the company issuing the shares may be leaving additional capital on the table that they otherwise may have raised to fund their business.

However, some experts believe that under-pricing is less the result of deliberate underquoting by issuers or underwriters, and more likely the result of over-exuberance from investors. This is supported by evidence showing that IPO performance starts to decline to more normal market levels the longer the position is held.

The under-pricing of IPOs has led to a strategy known as “stagging out”. “Stagging out”, “a stag profit”, or “flipping” refers to buying into an IPO with the intention of selling for (hopefully) a profit at the start of trading on the secondary market/stock exchange. The data compiled by Professor Ritter shows that this has been a lucrative strategy in US equity markets since the late 1980s.

The Australian IPO market has also shown evidence of under-pricing; with an average first day return of 16.6% for an Australian IPO in 2016, as quoted in the On Market 2016 IPO Report.