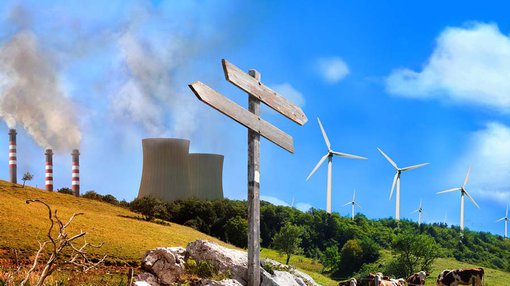 After 45 years of operation the Hazelwood power station and mine, located in the Latrobe Valley in Victoria, is set to shut down.

The decision, which will see the facility close in March 2017, was made due to the 1600 megawatt power station’s economic inviability, requiring hundreds of millions of dollars to be injected to upgrade the facility to adequate operational requirements.

For Hazelwood’s operators, today’s power prices do not justify the money necessary to be invested to keep the station running.

Yet the decision to close the plant will leave hundreds jobless.

Currently the Hazelwood plant employs 750 people, with only 250 required between 2017 and 2023, to manage the site’s rehabilitation.

Where do they go? A new energy revolution could provide new jobs.

In the meantime, Prime Minister Malcolm Turnbull pledged to work with the Victorian government to support workers who lose their jobs.

“This is a very, very tough time for the valley,” he told reporters in Sydney.

He said the federal government had established a ministerial task group “to provide the support the community needs to ensure there are jobs and opportunities”.

State Premier Daniel Andrews has pledged tens of millions of dollars in assistance to the La Trobe Valley region and workers facing unemployment.

The mine is set to be transformed into a lake before being handed back to the community.

Closure of coal plants such as Hazelwood is likely to increase as the shift to more modern and cleaner technologies accelerates partly fuelled by better technology and the hype surrounding ‘climate change’.

Regardless of whether climate change is man-made, part of natural cycles or a combination of both, governments around the world are investigating the science in order to change energy policies.

Many nations, are in fact, bringing in measures through law or through fiscal spending to move to cleaner or perceived cleaner energies.

China and India lead the way in building nuclear power plants as they make the shift away from coal into other fuel sources and no doubt place further stress on the coal industry.

The likely outcome through all of this is the dissipation in demand for coal.

Innovation in the energy sector is thus crucial to lessen the impact of the reduction in coal-based fuel sources, and possibly offer an alternative to those who refuse to go down the nuclear path.

Rather than competing with current coal or nuclear models, energy innovators can make them obsolete through new technology and ideas.

This philosophy was largely popularised by futurist Buckminster Fuller. For those unfamiliar with Fuller’s work, here is a quick snapshot.

The video describes Fuller’s philosophy of the interconnection of the world’s generators to form a planetary energy internet to provide a permanent supply of abundant clean energy to end hunger, poverty, pollution and war.

Taking a leaf out of Fuller’s book, rather than fight current energy models through taxation or closures, considered draconian measures and ineffective by many, the entire argument surrounding energy management can be made obsolete through the invention of new technology such as solar.

Whilst in the short-to-mid-term solar technology is not capable of powering our entire grid, evidence suggests that with a little help from its friends it one day will be.

In the meantime reliance on electricity produced by coal will continue to drop off as other clean forms of energy fill the void.

In terms of what the future of energy will look like, the recent announcement by Tesla’s Elon Musk and his new Solar Roof project offers us a glimpse.

Since coming onto the scene, Elon Musk has not only revolutionised the car industry in its move to electronic vehicles, the cost effectiveness of launching rockets into space and the way we make payments online with PayPal, he has now set his sights on a new revolution: off the grid solar energy to power your home.

Below is a recent presentation of how the technology will work:

Solar panels that look like tiles, along with the PowerWall 2, will allow future homes and vehicles to be fully powered by solar power.

The reliance on coal to provide electricity to our homes will in turn become an archaic notion.

Tesla is often criticized for receiving $4.9 billion in subsidies from the US federal government, however what most people are not aware of is that both the coal and oil industries receive far greater subsidies and rebates from government and are already well established and profitable industries that do not necessarily require suck kickbacks.

Whilst many people will ask “what about the jobs lost?” when talking about power plant closures, it is evident that technology will eventually transform the entire work force and present new opportunities.

By 2025, over 30% of current jobs will have been replaced by our android brothers and sisters, including jobs in the energy sector.

So it is time to look at alternatives that can drive new energy paradigms, whilst keeping the workforce vibrant.

Perhaps it’s time we started looking at things differently, just as Musk is doing with his business ventures.

Instead of worrying about losing jobs to technology, in an ideal society we should be celebrating the fact that the technology is improving our existence, and creating jobs in other areas.

The evolution into the new age of energy production is upon us.