Hartleys analyst, Trent Barnett, has initiated coverage of Birimian with a speculative buy recommendation and a 12 month price target of 60 cents.

The company is developing the Bougouni spodumene (lithium) project in Mali, but it also has a number of gold deposits in the same country located relatively close to the 4 million tonnes per annum Morila processing plant jointly owned by Randgold, AngloGold Ashanti and the government of Mali.

For political and social reasons, BGS is a very high-risk stock. Getting mining projects up and running in countries such as Mali is no simple feat, and there may be challenges ahead. Professional financial advice is advised if considering this stock for your portfolio.

Birimian’s combined resource exploration target in relation to these deposits is 8 million tonnes grading 1.5 grams per tonne for approximately 400,000 ounces gold. Barnett sees the potential for Birimian to negotiate a feedstock supply agreement with the owners of the Morila mill.

Barnett said, “If the exploration target is realised then we could speculatively derive a value of circa US$120 million based on no capital expenditure and approximately US$300 per ounce margin”. On this basis he attributes a speculative valuation of US$30 million to Birimian’s gold assets, and he also said there is the prospect of the assets being sold with either scenario assisting the company in developing the Bougouni lithium project. 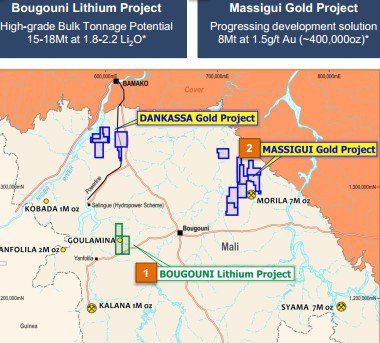 Barnett noted that while the Bougouni project is pre-resource, drilling results received to date had been encouraging and it was also worth noting that metallurgical bulk test work had been completed by CSA Global in 2007.

Given the size of the license area and the potential high-grade bulk tonnage attributes of the Goulamina lithium deposit, Barnett views Bougouni as an ‘enviable’ project even at this early stage. Allowing for sovereign risk, Barnett still rates this as a high-value asset attributing a preliminary valuation of 70 cents per share, although broker valuations are speculative and no guarantee to come to fruition.

This is more than double Monday’s closing price of 29.5 cents, which represents a discount of circa 50% to his 12 month price target.

Barnett sees a potential near-term catalyst in the establishment of a maiden JORC compliant resource which he expects will occur in October. He is expecting a ‘very large deposit at good grades (1.6 – 1.8%)’. 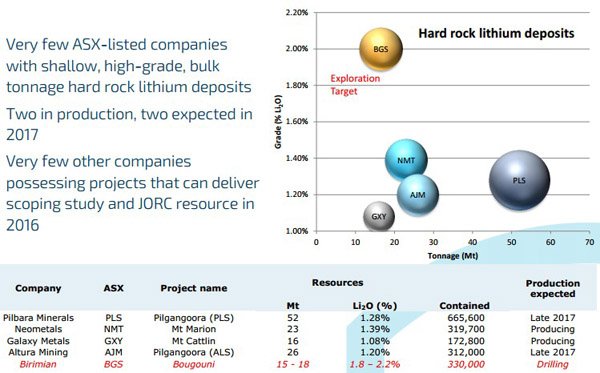 Barnett said, “If the deposit is as anticipated there is potential it could be developed into a 285,000 to 430,000 tonnes per annum operation over time subject to lithium demand growing such that it could be absorbed into the market given that the earliest we see potential for product sales is calendar year 2019”.

In terms of whether the size of the deposit will measure up to Barnett’s expectations, recent newsflow is encouraging in the context of his observations that the ‘West Zone (125 metres west of the Main Zone) appears to be of a similar size to the Main Zone ’.

With regard to the current exploration program, further diamond drilling is being undertaken at the West Zone while analytical results are pending for a further eight diamond holes at Main Zone. Consequently, there are a number of potential share price catalysts on the horizon which could support a rerating.

While the company’s shares have increased five-fold in the last six months this has been supported by material developments as referred to in Hartleys coverage. Consequently, further confirmation of what is shaping up as a promising resource has the potential to provide further share price support.

However, it should be noted that trading trends to date are not an indication of future share price performance and these should not form the basis of an investment decision. Also note that broker projections may not be realised, and recommendations and price targets should not be viewed as investment advice.