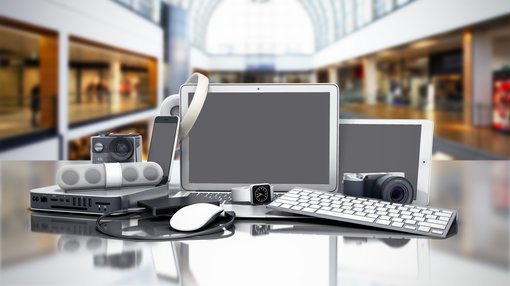 After a somewhat rough revenue patch, Australian online IT and Consumer Electronics vendor, Harris Technology (ASX:HT8) has seen its revenues pick up this year. The online retailer more than doubled its sales in March as it became a preferred company to fit out home offices and home-schooling setups amid the COVID-19 lockdown.

The recent success of the company is part of a wider uptick for the global consumer electronics online sales market, which some analysts predict is set for exponential growth.

It’s an important jump and sets the company up for an aggressive growth period as it looks to take advantage of increased sales in its traditional IT/CE divisions and from its newly established Pro-Hygiene division.

Harris Technology has long held a reputation as one of the country’s leading online IT and consumer electronics vendors.

Its brand reputation was built on the back of becoming one of Australia’s largest resellers of technology to small and medium businesses.

The company has a rich history, but not without its ups and down.

Founded by Ron Harris, it was acquired by Coles Myer in 1999, which took over nine Harris Technology Business Centres.

Current CEO Garrison Huang explains, “In 1999 when everyone started talking about E-commerce, Coles Myer went to see Microsoft to ask them if they could help establish their E-commerce business. Microsoft declined as it wasn’t their area of expertise, but referred the retail giant to Harris Technology, which at the time was doing quite well in computers and IT.

“Microsoft introduced Ron Harris to Coles Myer and as a result of that, Coles Myer acquired the business,” Garrison tells Finfeed.

Following the acquisition, Harris Technology went on a very rapid growth spurt. Over a four-year period, the company established several retail stores on top of its e-commerce business and became the number one e-commerce business in the country in early 2000.

However, in 2007 when the Coles Myer Group began restructuring, the company was sold to Wesfarmers together with Officeworks.

At its peak, Harris Technology had more than 10 business technology centres, across the country and its SMB focus saw it win a reseller agreement with Dell in 2009, including the servicing of Dell PCs.

Along the way it also became a Telstra dealer, and partnered with Engin to offer hosted VoIP.

At the time, Garrison was running the B2B focused Anyware Corporation.

“We had a national presence and a distribution centre and a sales force in every state. Our focus was on computer accessories, but we were looking to move into the B2C sector.”

A new business outlook to turn the business around

In recent years, Harris has undertaken a painful restructure, sold the Anyware business, closed down warehouses and cleared stock.

“From the end of 2018 to 2019, we heavily restructured and as a result there was a lot of write down,” Garrison says.

“We incurred a loss last year of $700,000, but we have now turned that around because we were able to focus on the B2C business of Harris Technology and implement a strategy to co-work with the major e-commerce platforms such as Amazon, Catch and Kogan.”

Garrison is at pains to point out that Harris Technology does not compete against the major online brands, but works with them to enable them to leverage their knowledge, expertise and brand name.

He uses Catch Group to highlight how these relationships work.

Harris was working with Catch well before that group was acquired by Wesfarmers in 2019. Harris was invited by Catch to sell on its platform because of the products it could source and the relationships it had with many IT vendors/brands.

Garrison says that because Catch Group’s technology product range was limited, they saw Harris as a complementary business.

Kogan was also able to leverage off the Harris Technology name and the IT hardware expertise.

The company is now rebuilding the goodwill through a more targeted strategy and it looks to be paying off.

The long standing online retailer more than doubled its sales in March this year as it became a preferred company to fit out home offices and home schooling setups as daily life shifted due to the COVID-19 lockdown.

“Total revenue for the March 2020 quarter is $3.4 million compared to the March 2019 quarter of $2.3 million,” Garrison said upon release of these figures.

“Management attributes the increase in sales to strategically leveraging off the marketing and distribution power of the major e-commerce platforms such as Catch, Kogan and Amazon Australia, [and] higher demand driven by the establishment of home offices and home schooling by consumers as a result of the current government requirements.”

Garrison said the company “will continue to improve sales with all the major online platforms and also from our own website.”

He sees this turnaround as Harris Technology’s big comeback and recently told shareholders that underpinning this is the ability to run a lean business and turn a quick profit under a company that is well structured with the knowledge and experience in product sourcing.

Of course there is also the addition of new business streams.

While the company was able to capitalise on the shift to home schooling and home working, it also had its sights set on another essential product range during this pandemic.

By mid-April, Harris announced that unaudited revenue for the March 2020 quarter had significantly increased and was expected to be sustained at similar levels for the foreseeable future.

It was at that time that the group established its Pro-Hygiene range of products including facemasks, hand sanitiser gels, alcohol wipes and protective gowns.

Sales of Pro-Hygiene products alone for April 2020 were $1.05 million (unaudited) with strong gross margins of 20%.

Consequently, in just one month Pro-Hygiene sales have exceeded the June quarter guidance by 150%.

The entry into this market was through the company’s ability to spot trend and its experience in product sourcing and relationship building.

“I noticed the demand and the shortage of products in this area,” Garrison says.

Harris has been authorised by China’s Jointown Pharmaceutical Group (one of the leading medical supply and distribution companies in China) to distribute its Jointown and Aumacom face masks.

As with all good relationships this was forged through connections.

Jointown is one of the top 500 companies in China, so it is a substantial relationship. Garrison was introduced to Jointown through a friend who was working for the China giant. As a result, Jointown did its due diligence, found that Harris had experience, knowledge and infrastructure already in place in Australia and offered to work together.

The relationship with Jointown is in its infancy, however Garrison believes it can be a long-term partnership.

“I'm looking forward to working with them in the long term utilising their enterprise power and their sourcing power in China. This could provide big potential for both parties.”

Harris has expanded its product range by securing the non-exclusive Australian distribution rights for “Gotdya” brand of hand sanitisers and “Tender Kiss” brand of alcohol tissues from two manufacturers based in China. A total of four full containers of the 75% alcohol based hand sanitisers and tissues have landed and sales of the brands have commenced this month.

A national network of sales agents to sell Pro-Hygiene products has been established, and one agent has been appointed for each state of Australia.

Sales revenue for April 2020 for both the IT/CE (Consumer Electronics) division and the Pro-Hygiene division was over $2.7 million (unaudited). This monthly sales exceeded quarterly sales of $2.23 million (audited) for the April-June 2019 quarter.

The profit update released today is testimony to the hard work the company has put in over the last 12 months to turn the company’s fortunes around.

Harris Technology surges as profit upgraded by more than 50%