From ‘happy snaps’ to a share price slide: Snap Inc

Banking giant Morgan Stanley has admitted it was ‘wrong’ about SNAP Inc., which fell below its initial $17 initial offering price (IPO) for the first time earlier this month.

The company’s flagship app, Snapchat, took the world by storm in late 2011.

The image messaging and multimedia mobile application raised over $1.8 billion in equity from investors in May 2016, and one year later it had amassed over 160 million active users the world over.

Snap’s IPO had the company valued at between $20 and $25 billion, making it the largest IPO on the US exchange since e-commerce giant Alibaba ($168b) in 2014.

Unfortunately, things haven’t exactly gone well for the makers of the popular app since. 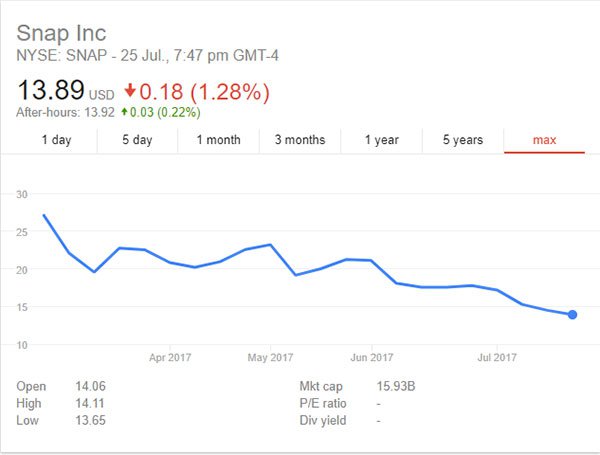 Snap shot up 44% on its first day, peaking at $29.44 on March 3, clearly charming the investor world like it had its smartphone customer base.

It’s been a depressing slide since those highs, with the company reporting a $2.2 billion quarterly loss in May 2017.

The ‘bend and snap’ of Snap Inc

Investors may have seen Snap Inc as a safe bet considering the app’s widespread popularity. After all, the four largest companies in the world are tech companies, meaning investors are familiar with the whirlwind scalability of a young tech play with a winning formula. So where did Snap go wrong?

There could be an argument to be made that Snap let their app’s success go to their heads, and got a bit complacent. Brian Nowak, an analyst at Morgan Stanley, recently chimed in on the topic: “We have been wrong about Snap’s ability to innovate and improve its ad product this year (improving scalability, targeting, measurability, etc.) and user monetization.”

Morgan Stanley expects Snap to fall well short of its projected revenue for 2017, and has forecast a significant slowdown in new users moving forward.

Nowak’s statement carries particular weight considering that Morgan Stanley was the lead underwriter for Snap’s IPO. It believed Snap would fare better against major competitors – but there’s already signs that its popular app will go the way of its share price.

Instagram (owned by Facebook) is in direct competition with Snapchat and has some 250 million daily active users.

Nowak believes Instagram is winning the battle. “Snap’s ad product is not evolving nor improving as quickly as we expected and Instagram competition is increasing. We believe Instagram has become more aggressive in competing for Snap’s ad revenue,” he said.

Tom Buontempo, president of Attention Global, believes Instagram is striking at the opportune moment. He pointed to the platform’s recent introduction of free campaign trials as a sign it’s looking to snap up Snapchat’s user base.

Despite recent inroads from Facebook, Snap has begun to ramp up its efforts to win advertisers back, and is exploring a native approach for users. Native ads are designed to blend into other videos on the platform, aiming to preserve user experience. But is the idea likely to work?

According to David Cohen, Snap’s platform is not optimal for video advertising. Cohen, who is the North America president of ad agency Magna Global, suggested that Snapchat could not compete with more traditional ad platforms like Youtube. “You are a thumb click away from something else. The idea of ad skipping is a reality,” he said.

Despite Snap’s recent and highly publicised troubles, some are remaining optimistic.

Brian White, a leading analyst with Drexel Hamilton, believes Snap could soon reach $30 a share. White, who recently spoke on ‘Squawk Box’, noted that Facebook was down 60% after it went public. He believes Snap could find a foothold in the mobile ad market and was bottoming out at present, stating: “I think it’s a great buying opportunity. If you look at a lot of high growth companies, in the first three years after an IPO, they trade at nine to 22 times enterprise value to revenue.”

There’s no doubt that Snapchat is one of the most popular apps in the world, but it’s survival seems dependent on its ability to incorporate effective advertising. Whether it can find a solution before its users are snapped up by competition remains to be seen – but its investors will very much be hoping it can.