Over the last nine years, Mary Anne Waldren has run the Master Entrepreneurs Program across a range of industries to help startups, early stage companies and those looking to develop a business idea.

This year’s program, which will be held on December 1, will see a group of 30-40 participants take part in a sort of ‘speed dating’ event with the CEO of Startup Victoria, the President of ACFID, and the CEO of Linkfluencer among others.

“The reason I created the program was because I knew what it felt like to be a start-up, judged by others and unsupported,” Waldren said.

“And I wanted people in business to know that I understood their situation and how it felt to find yourself alone and trying to make things work.”

Each time the program runs, a group of ‘masters’ are chosen — these are people who’ve found success as entrepreneurs and are interested in offering tangible advice and mentoring. Topics range from attracting customers, securing sales, and gaining exposure in a crowded marketplace.

The upcoming program will involve five masters who will each spend half an hour with groupings of 5-6 participants at roundtables. During the half hour, masters will share their story and get to discuss participants’ business goals. Post-event, each master chooses at least one participant to mentor.

“It’s really wonderful because each time I run the program, more than a third of the room end up getting mentored. It’s amazing how these master entrepreneurs — people who have grown global businesses — once they’ve made it, they are attracted to those types of people and they like to give back,” Waldren said.

Participants complete a questionnaire prior to the day which outlines their entrepreneur journey up to now and any areas they’d like help with. Their responses are reviewed by the masters beforehand to make the most of the ‘speed dating’ time.

“It results in a lot of shared wisdom. Some masters share the good, the bad and the ugly. Sometimes the information shared is so intimate and insightful, it really does help people understand what it takes to be an entrepreneur, to sell a company, to merge with another company, or list on the ASX,” Waldren said.

To what extent the relationship between master and participant continues after the program is up to each individual, however in Waldren’s experience, these relationships can often continue over a long time and have a significant impact.

“In one case I was able to help this young university student through the program, and it ended up transforming his life. He did it himself — in that he had a good product, a good idea, and he was a real go-getter. He connected with people and made the most of the experience,” she said.

“His life then went in a direction that it would never have gone if he hadn’t attended the event. Now he’s finding success working in the US as a direct result of people he met on the program.”

In another case, one participant needed funding to further their business goals, and were able to raise the money through connections they made in the program.

“A lot of people who have grown global businesses, they’ve made their money and they can now invest in other businesses. And they’re very discerning about who they invest in, so they need to find the right connections too. If you ‘gel’ with them, a lot of the masters are interested in ongoing relationships,” Waldren said.

In some cases, particularly when the event is held for non-profit organizations, the event has resulted in up to two thirds of participants getting mentored. Waldren is continuously amazed by the generosity of all who attend the events, and the depth of the connections made.

“It’s about creating the intimacy. That’s one of my greatest gifts; I understand about connecting people. I’ve had a lifetime of working with big business leaders. It’s not much for me to say ‘That’s a great idea, I think you should meet X’ and introduce them.

“The beauty of the Master Entrepreneur Program is that everyone in the room is being generous to everybody else. The participants also network together and they’re delighted to meet each other because, usually, they’re like-minded people. And they can share their networks. We’re all there to help each other take that next step,” she said.

The event will be limited to 40 participants — each of whom will get the chance to meet these top entrepreneurs: 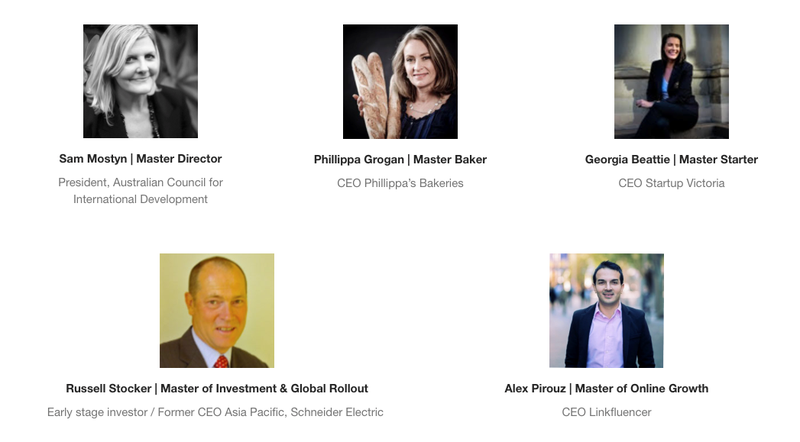