Gold hits a near seven-year high of about US$1590 per ounce overnight as the precious metal reasserted its position as the go-to safe haven commodity when there is a flight from assets such as equities that are considered more risky.

Last night’s increase also represented the ninth consecutive increase which has spanned late 2019 and 2020, a period in which the precious metal has increased by about 7% from approximately US$1480.

Average costs of production are in the vicinity of $1300 per ounce, implying a healthy margin of about $1000 per ounce.

Investors have picked up on this trend with substantial increases in the share prices of prominent Australian producers occurring since late December.

The following chart demonstrates their performance over the last month. 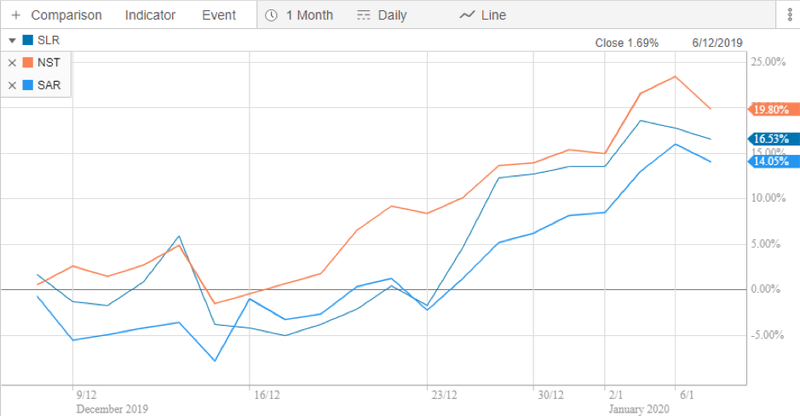 Central to the surge in the gold price has been geopolitical instability triggered by the killing of General Qassem Soleimani, one of Iran’s top military commanders.

This was linked to a US air strike near Baghdad’s airport.

The US has triggered significant tension across the globe in the last 12 months, mainly due to trade sanctions and warnings to various countries including North Korea regarding potential military intervention.

With the landscape unlikely to change in the near term, one could mount a case for further upside in the gold price.

However, Brien Lundin, editor of Gold Newsletter, was reported by MarketWatch.com as saying that geopolitical events aren’t a good reason to buy gold.

The following is an excerpt from the MarketWatch report

“The price almost always spikes before most investors can buy it and drops well before they can sell it,” Lundin told MarketWatch.

“So outside of high-frequency traders or insiders, everyone else ends up holding the bag.”

He also said these events “aren’t a logical reason to own gold since only those people in a specific troubled region might find the events a reason to actually own the precious metal.”

The gold market was “just beginning to get wider acceptance of the fundamental monetary issues that are driving the price of gold higher,” said Lundin.

“Now the market may confuse the driver as being geopolitical in nature, and the inevitable correction once things calm down may damage the outlook for gold.”

And the “thesis for gold rests on the global macroeconomic picture and the expansionary monetary policies of central banks around the world,” she said.

The consensus appeared to be that such macro conditions are unlikely to change significantly, pointing to relative stability in the gold price in 2020.