Working with your direct competitor may seem counterproductive, but that’s the accusation being levelled at some of Germany’s finest car manufacturers.

It was German magazine Der Spiegel which spilled the beans, suggesting that the aforementioned car manufacturers were colluding for decades in regards to emission tests. The news reinforces the loss of consumer trust in German car manufacturers since the infamous 2015 Volkswagen scandal.

Investors were quick to react to the fresh controversy surrounding the German car industry, as share prices sunk across the board for the companies concerned. 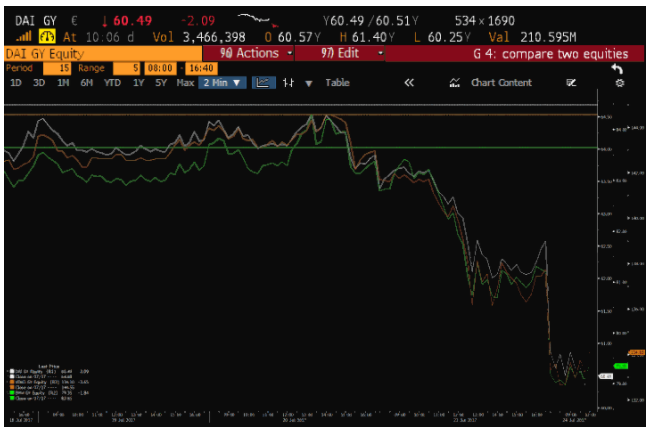 The ‘cartel’ allegation implies that the companies collaborated for decades on their diesel engines, rigging the size of their tanks designed for AdBlue liquid.

The liquid is injected into the exhaust chamber and burnt at high temperatures, with the intent of breaking down harmful nitrogen oxides. It’s believed that BMW, Daimler and Volkswagen rigged their AdBlue tanks to be too small to effectively work, thereby ‘masking’ the extent of the engines’ emissions and cheating tests.

The claims, if true, are akin to a cover-up, as recent reports indicate that diesel cars can emit up to 10 times more toxic pollution than trucks and buses, with prolonged exposure linked to bladder and lung cancer.

If found guilty, the companies could be whacked with a multi-billion euro fine and be liable to a plethora of fresh lawsuits from shareholders and consumers.

The European Commission has moved quickly, appointing Commission Vice President Jyrki Katainen to oversee the investigation into the allegations.

Germany’s Association of the Automotive Industry (VDA),which represents the manufacturers concerned, has called for calm and reiterated that the standardisation techniques used were not ‘illegal’.

“With its technical innovations and its economic success, the automotive industry is an important part of the image of Germany all over the world,” VDA President Matthias Wissmann said.

“It is our duty and responsibility to protect this reputation.”

News comes on the back of Audi recall

With speculation already rife that German manufacturers have been displaying anti-competitive behaviour, the news could not have come at a worse time.

Audi – which is owned by Volkswagen – recalled more than 800,000 vehicles in Britain last month after conceding it had published misleading emission numbers.

To add more dirty fuel to the fire, Daimler – which owns Mercedes-Benz – issued a call-back on over three million cars after confirming it had also lied to consumers about its emission figures.

Public pressure is mounting on the German government to outlaw diesel engines as the future of the country’s car industry is looking decidedly shaky. In a possible sign of things to come, a Stuttgart court ruled in favour of banning diesel cars last month.

“From 2010 until today, authorities have failed to meet their duty on lowering emission levels,” Judge Wolfgang Kern said.

“Driving restrictions are legally enforceable and in the court’s view a proportionate measure because protection of health outweighs the right to property and freedom to act for vehicle owners.”

The ruling was particularly sobering for Mercedes-Benz and Porsche, who happen to share Stuttgart as their home city.

Daimler voiced their displeasure with the ruling, claiming that software patches would alleviate current issues.

“Driving bans are fundamentally not a solution. There are other measures that could quickly reduce fine dust particles and nitrogen oxide from diesel exhausts,” Daimler communications boss Joerg Howe said.

Considering that all petrol and diesel cars will be banned from 2040 in the UK, Howe’s words could fall on deaf ears. A similar move in Germany seems inevitable, and as Tesla continues to gain traction in the electric vehicle market, the onus is on German manufacturers to reconsider their business models for a changing future.

Audi has recognised this, announcing that it will cut $14 billion from its gas and diesel research to fund the development of a mass market electric car. The manufacturer aims to begin its all-electric program by 2022, and is launching its first electric car, the ‘e-tron’ SUV, in 2018.

Volkswagen is also developing an electric vehicle program and BMW recently released the i3, its first all-electric car.

While the latest blemish on German carmakers is only in its infancy, the future of diesel seems set in stone. Whether the ‘big five’ can regain lost trust, as well as lost ground in the race towards electric vehicles, is the real question.