Why the future is still bright for gold 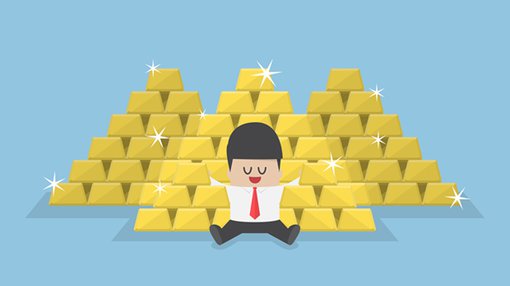 Despite a recent retrace, gold has boomed since the beginning of the year in what has been a spectacular move for the precious metal.

Reaching an all-time high of AU$1,816 per ounce in July, gold has mostly continued its upward trend as you can see by the graph below:

As political uncertainty builds given recent world events, many analysts are predicting gold to maintain its historical trend as investors use it to hedge against risk.

Of course fluctuations in the commodity are difficult to predict and investors should be aware that if they are considering gold as an investment, they should take a cautionary approach and seek professional financial advice.

Looking at world events, we saw the monetary metal gain with both the recent Brexit vote in the United Kingdom and Donald Trump’s rise to the White House.

But highlighting the fact of fluctuating prices is gold’s small retracement as Trump tones down his rhetoric. Despite the change in tone, the fundamental factors or growing political and economic discourse remain.

If anything tensions in the United States have increased with many Americans taking to the streets to protest against the President elect.

Move forward to next year and we have crucial elections in Germany and France where again the ‘populist’ movement appears to threaten the establishment, another bullish sign for gold in the long term.

Then there are increasing tensions between nations around the South China Sea and in the Middle East and the debt from Italy that needs restructuring next month. Remember when Greece did this a few years ago? This could play out to be Greece 2.0.

On the economic front many experts are forecasting rocky seas ahead in which historically investors move to gold as a safe haven asset.

Peak gold has been reached

Gold is becoming increasingly difficult to find, whilst at the same time demand for the precious metal remains strong.

New gold deposit discoveries are becoming scarcer with the easy to find mine deposits having already been found.

This has resulted in peak gold with both gold discovery and production having dropped off in recent years: 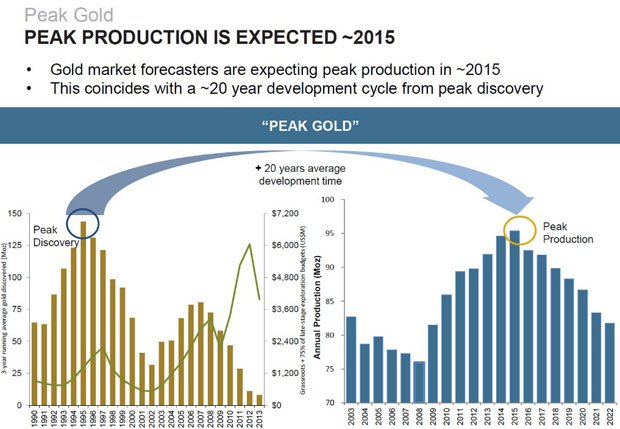 This fall in supply is likely to place inflationary pressures on the precious metal over the longer term.

The stars appear to be aligning for gold bugs based on the underlying fundamentals and one feels it is merely a waiting game.