The future of oil: short-term and long-term outlook

Since the original oil rush of the mid 1800’s, oil has been the driving force of the modern economy.

Fortunes have been made, countries birthed and even wars fought due to the commodity.

However with ever improving technologies that no longer relies on oil what impact will this have on oil?

Over the past decade we have seen the price of oil swing wildly, making it difficult for companies and investors to make a decision on what to do.

The recent plunge in oil from over US$100 a barrel to under US$30, now hovering just above $50 a barrel, saw North America’s shale oil industry almost go bankrupt over night with at least 59 shale companies filing for bankruptcy in 2016.

Crude oil price measured in US$ per barrel: 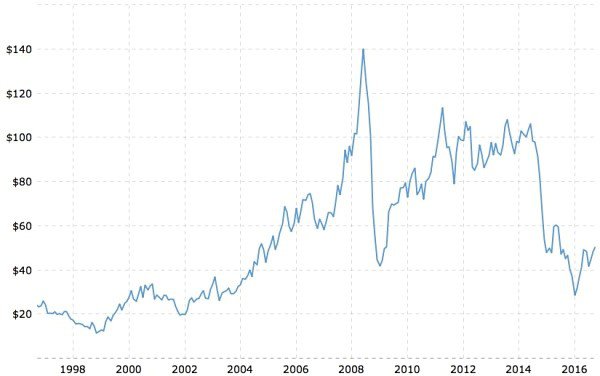 So where to from here?

Let’s take a look at possible short-term and long-term drivers to see where the price of oil could be headed.

But before we jump into that, we must remind investors that making investment decisions based purely on speculative commodity price alone carries risk. Always consider your own personal circumstances before investing, and seek tailored financial advice.

In the near term there is a strong case for oil prices to recover much of the ground lost in the past two years.

Russia plans to join OPEC’s decision to limit oil supply, a move aimed at driving up the price of the commodity.

However Igor Sechin, head of Russian state-owned oil giant Rosneft, disagrees with the call, stating that it is unlikely that other OPEC nations: Iran, Saudi Arabia and Venezuela will agree to cut production.

Rosneft makes up 40% of Russia’s crude oil output so a move either way could have a major effect on oil supply in the near term.

Additionally, increasing conflict throughout the Middle East could be a driving factor going forward as any further outbreak of war or tensions in the region could see oil prices spike over night.

Peak oil that we were once warned about appears to have been a myth as oil rich nations are pumping oil out of the ground without pause.

Hit by low oil prices, Saudi along with other OPEC nations has set record oil output in a bid to maintain profit margins.

Saudi Arabia, long known for oil being the foundation of its wealth, now realises that riches the black liquid once bought may be coming to an end and is shifting to a post oil future.

Deputy crown prince Muhammad bin Salman unveiled a plan for the kingdom to end oil dependence by 2030, however ramped it up by saying the nation could achieve this goal by 2020.

The new strategic outlook comes as low oil prices has seen revenues for the kingdom slashed, the IMF warning that based on its current trajectory Saudi Arabia faces bankruptcy by 2020.

The warning has been noted and along with Japan’s Softbank, the Saudi’s plans to launch a $100 billion fund that will invest in the technology sector. Making the oil rich nation the world’s number one investor in technology.

This development follows on from the recent US$3.5 billion investment into Uber by the Saudi kingdom.

Interesting that they chose Uber to invest in as it is one of many companies investing in the future of how automobiles will be run and operate.

Interestingly, future vehicles are moving away from the need for combustible fuels, meaning oil will not play as large a role as it once did in the sector.

With electric vehicles increasingly eating away at the petrol vehicle market, a trend that will likely accelerate, investors may find new opportunities in commodities and businesses that service those needs.

One of the main commodities to benefit from this evolution is technology is lithium.

Lithium is the essential ingredient in producing lithium-ion batteries used in electric vehicles, solar panels and other gadgets such as mobile phones and laptops.

Hence why lithium stocks have soared over the past year.

It is important to note that as one industry falls another will rise, it is our role as investors to peek into the future seek out these new opportunities.

To receive the latest updates on upcoming trends in the market place subscribe to our free newsletter.