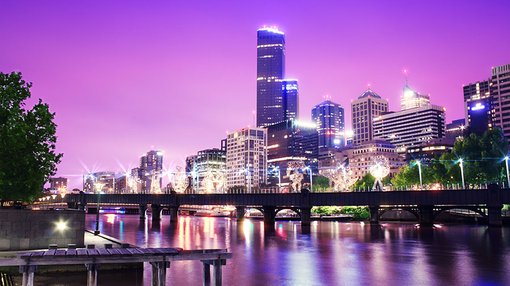 2017 was a year of major change and evolution across the board.

The Australian economy grew, as it consistently does, despite the economic hurdles set before it by world markets. We saw traditional pillars of the economy such as the Aussie dollar, mining, property and stocks compete with a list of new themes now dominating investors’ attention — cryptocurrencies, the Internet of Things (IOT), and the Trans-Pacific Partnership (now the CPTPP) to name a few.

These are all revolutionising how Australia does business and how its consumers spend. We are seeing the ‘sharing economy’, Fintech and e-commerce become staple industries in themselves, having been akin to specialist niches up until now. Meanwhile, several Australian-based and ASX-listed companies are taking notice and developing products to keep up. But while technology continues to accelerate change, Australia will still be faced with serious questions around more traditional areas — housing prices, the Aussie dollar and the future of mining.

Below are five key questions it will face in 2018.

1: How will Australia manage the rise of cryptocurrencies?

By 2020, over 80 per cent of the world’s population will have access to a smartphone. Currently, only 50 per cent have a bank account. Cryptocurrencies and digital wealth are offering to bridge this divergence.

Taking a broader look, it seems increasingly likely that financial independence and self-empowerment will be brought about via digital means rather than political ones.

As a response to the downsides of centralised market systems that rely on relative value, cryptocurrencies (powered by blockchain technology) offer a decentralised method of valuing goods, services and currencies through an objectively secure and transparent means which aims to democratise the world’s currencies by creating economic ‘fair play’.

How Australia adapts to this quickly changing landscape of currencies, wealth and digital value remains unclear. The Australian government doesn’t regulate Fintech products such as Bitcoin — yet. How this story develops in terms of government intervention (domestically and internationally) as well as general investor appeal is sure to remain a central theme in 2018.

With graphs like the one below, government regulation sooner or later seems inevitable. 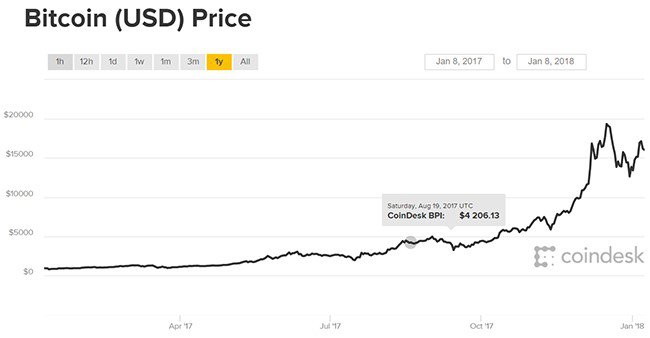 The last year saw the value of Bitcoin soar by over 1500 per cent, rising from less than US$1000 per Bitcoin to as high as US$15,000 during the year (amid persistently high volatility).

2: If we are in fact in a housing bubble, when will it burst?

Homes in Sydney and Melbourne have never been more expensive on any measure, including relative to income and rent figures. While that’s a fact, the question whether these markets are in a bubble isn’t so certain.

Stable demand is supporting nominal house prices, although increasing supply and an already expensive price-base sounds like a recipe for house-price-inflation to slow, and possibly even reverse if the Reserve Bank of Australia (RBA) decides to accelerate interest rate increases. 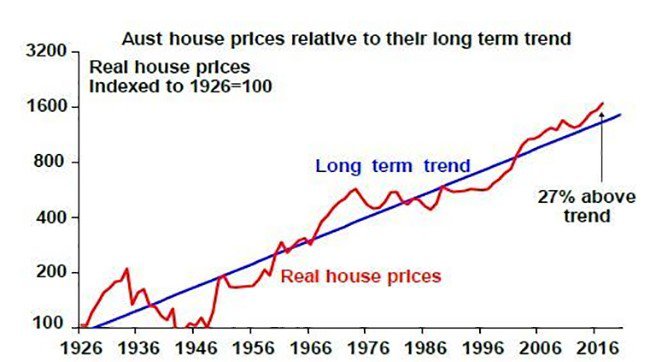 If you’re of the opinion that Australian property prices don’t fall — ask someone in Perth or Darwin (or other regional towns in a mining area) about the ‘flexibility’ they have witnessed in prices.

That said, Sydney and Melbourne could continue as a runaway train from an inflation perspective. The other possibilities are that prices could slow, or the ‘bubble’ could even burst.

3: Will banks continue to set the pace on the ASX?

With the banks likely to be under even more pressure to tighten lending standards to reign in speculative property investing and with global interest rates on the rise, 2018 could see a decline in investor demand for bank stocks and those exposed to banking. Throw in new taxes on foreign property buyers and China’s crackdown on money leaving its borders, and you get some significant market risks for the coming year.

If the Australian property market does falter in 2018, the effect on the wider economy could be unprecedented. Why? Because a property bust combined with the possibility of lower credit ratings for the major banks, raises the risk of a local financial slowdown in similar vein to Ireland and Greece around 2011.

Australia had the good fortune of largely avoiding the most debilitating effects of the GFC in 2008, but the regulatory backlash has been felt globally regardless of financial exposure. Australia now has tighter lending regulations and bank capital rules, with 2018 promising to deliver yet more regulatory tightening. 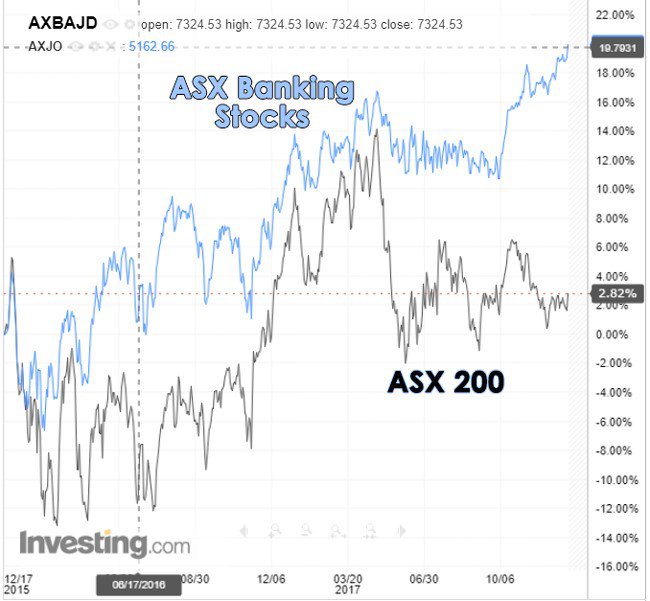 In terms of the ASX, the Aussie benchmark bank index is trading at all-time highs indicating that investors’ risk-appetite remains strong.

4: Will the mining recovery continue?

After a period of declining revenue, several major Australian mining industries bounced back in 2017.

Both base and precious metals experience heightened miner attention as spot prices continued trending higher. Commodities such as lithium, cobalt, zinc and graphite were the standout performers of 2017, thanks to their importance in lithium-ion batteries and energy storage technologies.

Mining industry capital expenditure continues to decline but has now reached a historic low of around A$30 billion for the last fiscal year. There is a possibility that this expenditure may creep up again due to the strong price inflation seen in 2016/17, which can lead to a lagging knock-on effect of more capital expenditure. 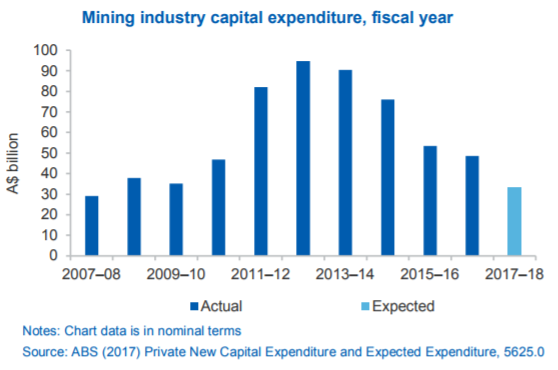 Australia, along with the rest of the world, will see further progress towards a lithium-ion powered future in 2018. This could maintain a strong demand for the commodities vital to these cleaner energies, and contribute positively to Australia’s dominance in the market.

5: What next for the Aussie dollar?

The Australian dollar has remained in a $0.70-$0.80 range against the US dollar for three years. However, given the telegraphed monetary policies of the US Fed and RBA, we could see changing yield-differentials affect the Aussie dollar significantly.

The Fed is expected to raise rates tentatively while the RBA is admittedly worried about runaway property inflation and a frothy stock market — both of which could see the RBA more likely to consider rate rises.

The Aussie dollar is on course to record four consecutive weeks of gains against the US dollar, and is already trading close to the top of the trading range that it has been on for the past two to three years. 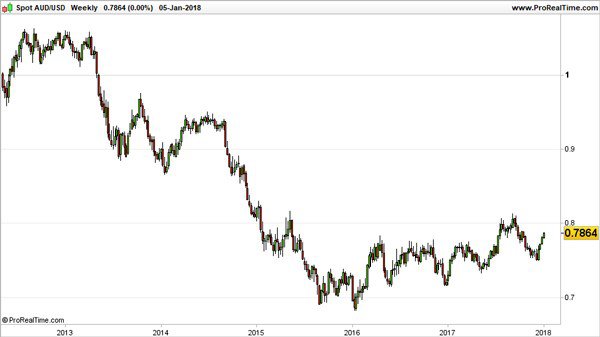 It is tipped by some to trade as high as 83 cents in 2018, and CommSec analysts forecast total returns on Australian shares of 10-12 per cent in 2018. That said, currency movements are notoriously hard to predict as there are so many global factors at play.