Finders Resources operates in Indonesia, a region which currently carries high sovereign risk. Those considering this stock as an investment should take this very high risk environment into account and seek independent financial advice for further information.

FinFeed caught up with Finders Resources (ASX: FND) Managing Director, Barry Cahill on Friday shortly after he provided a promising update on the group’s Wetar Copper Project in Indonesia.

Cahill reflected on the encouraging signs that started to emerge in the latter half of 2016, indicating FND was poised to benefit from its concerted exploration campaign conducted over recent years.

With plant construction and tweaking now complete, Cahill is buoyed by the fact that during the June quarter the company demonstrated it is capable of delivering maximum capacity of 28,000 tonnes of copper cathode per annum.

Following a period of fine-tuning, he is now basing his projections on the achievement of steady-state production rates of 28,000 tonnes per annum.

Cahill also pointed out that cash costs reduced to US$1.02 per pound in the June quarter – not only slicker than the previous two quarters, but lower than the life of mine fundamentals of US$1.05 per pound.

With copper experiencing a strong run, Cahill referred to the project fundamentals. As highlighted below, the current copper price of circa US$2.70 per pound would result in calendar year 2017 EBITDA of circa US$95 million and a net profit in the vicinity of US$42 million. That’s equivalent to circa AUD$53 million based on current USD/AUD exchange rates.

This represents earnings per share of approximately 7 cents, in line with consensus forecasts for the 12 months to December 31, 2017. Based on these metrics, FND is trading on a PE multiple of 2.6 relative to Friday morning’s opening share price of 18 cents. 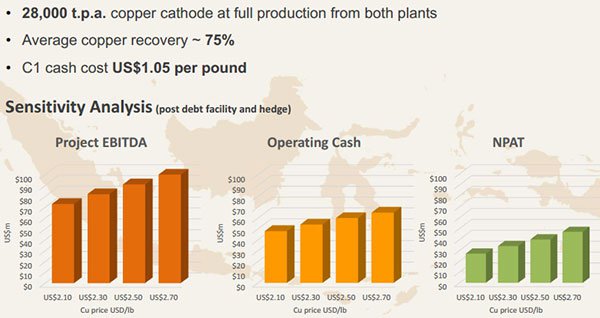 With FND likely to be generating operating cash flow in the vicinity of $75 million in 2018, the company is well-placed to fund exploration initiatives which could expand the resource size and mine life of the Wetar project.

Cahill also highlighted the fact that FND would move to a debt-free position in 2018, which opens up the way for capital management initiatives.

Cahill said at this stage he would probably lean towards paying a dividend; even if a share buyback program was conducted, it would no doubt have a positive impact on the company’s share price, particularly given its conservative trading multiple.

Cahill pointed to the Lerokis and Meron deposits, which have already demonstrated promising grades. However, a full-scale exploration program could well open up a sizable open pit resource with the prospect of extending the project’s mine life and substantially boosting cash flow given that ore would be processed through established infrastructure.

Importantly, both deposits are close to the current processing facilities with Lerokis situated four kilometres from the plant and Meron located only one kilometre from the leach pads.

An updated mineral resource at Lerokis is expected in the second half of 2017, and this could be a share price catalyst given it will provide an indication of the potential mine life extension.

Canaccord Genuity analyst, Larry Hill, believes FND is substantially undervalued based on the merits of the established Wetar project and the prospect of exploration upside.

Hill has a buy recommendation on the stock with a price target of 35 cents.

It should be noted that broker projections and price targets are only estimates and may not be met.

Interestingly, Hill is predicting a dividend of three cents per share in calendar year 2018, implying a yield of circa 17% relative to FND’s current share price.