In a decision that is likely to immediately impact consumer confidence and discretionary retail spending, the Fair Work Commission is about to hand down its annual minimum wage decision that will impact 2.2 million workers from July 1, 2019.

Encapsulating the various scenarios that could emerge, particularly given the wide range of expectations between political parties, employee groups, industry bodies and the unions, The Australian reported:

The Fair Work Commission will tomorrow hand down its annual minimum wage decision revealing the quantum of the pay rise that will flow through to 2.2 million workers from July 1.

The Australian Council of Trade Unions (ACTU) wants the minimum wage lifted by $43 a week to $762.20 a week but employers have called for the rise to be limited to about $13 to $14 a week in line with the inflation rate. 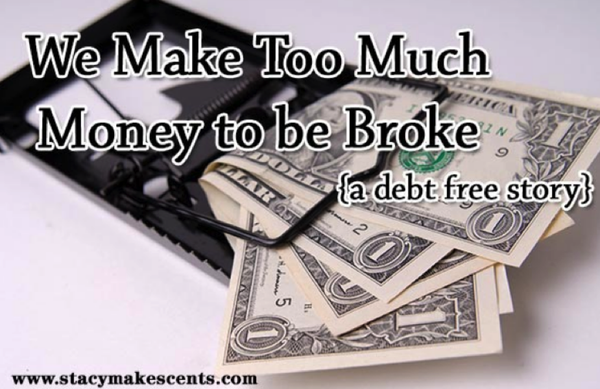 The Australian Chamber of Commerce and Industry has urged the commission to grant a maximum $12.95-a-week increase, describing it as an “appropriate and prudent level of increase”.

Scott Barklamb, the chamber’s workplace relations director, said a 1.8 per cent increase would see the minimum wage keep pace with price increases, while maintaining the purchasing power and living standards of lower-paid workers.

Is keeping pace enough or too much?

However, some economists say that we need to be doing more than just keeping pace, particularly in light of the long-term stagnant wage growth that workers having endured for some years now.

Indeed, the following excerpt from parliamentary records indicates that there has been a substantial slowing in wage growth over the past five years. 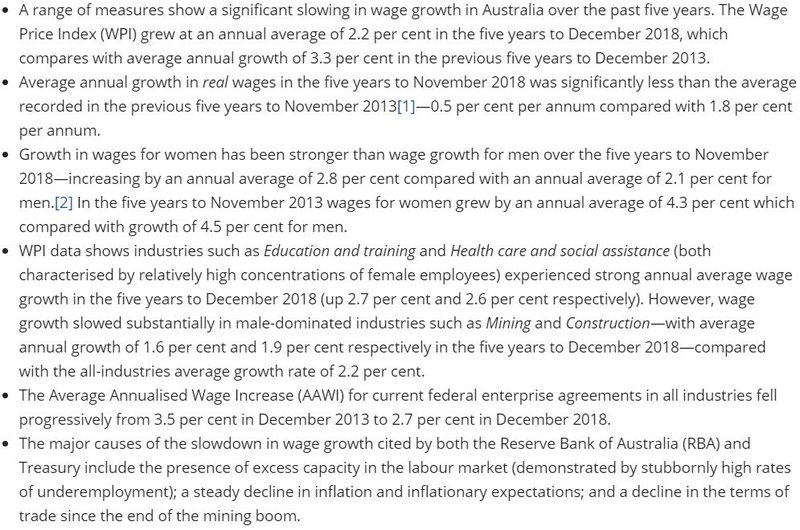 In raw figures, the Wage Price Index tells the story with five-year growth to December 2018 of 2.2% well below the 3.3% achieved in the five years to December 2013, with the latter coming off the back of the global financial crisis.

The spotlight turns to productivity

It could be argued though, that today employers are more cognisant in terms of linking productivity to employment, with an accelerated trend of transitioning full-time employees to permanent or non-permanent part-time positions. 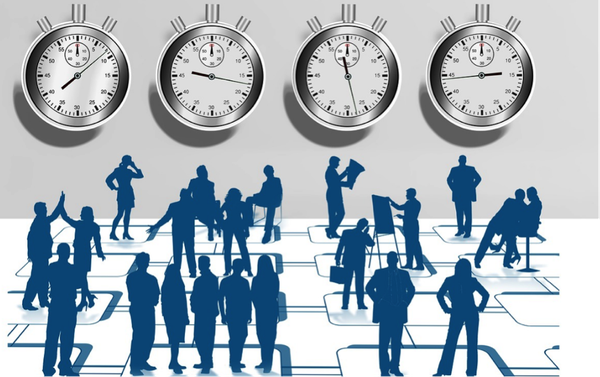 As indicated above, there is consensus between the RBA and Treasury in determining the causes of the slowdown in wage growth with the main factors being the presence of excess capacity in the labour market, a decline in inflation and inflationary expectations and a decline in the terms of trade since the end of the mining boom.

However, with headline unemployment numbers at historically low levels, using ‘excess capacity in the labour market’ would appear to be difficult to substantiate.

Labour is akin to any other commodity

Just as the supply/demand dynamics for commodities drives prices in various directions, the same situation applies in the labour market, and manipulation or price-fixing always ends badly.

It comes back to productivity which can be externally stimulated by measures such as government incentives for business investment.

Employing a top-down approach provides equilibrium, as businesses generate income from investments which can then be used to hire more staff and/or increase the number of staff.

Both scenarios are healthy for wage growth as the former has the impact of reducing supply in the labour market, generally forcing employers to pay more at a time when the labour pool is shrinking.

However, it would be economically damaging for regulatory bodies to impose an arbitrary wage increase that will shut the doors of some businesses and lower the income generation from others, as this would reduce their capacity to pay wages.

As the famous German economist, philosopher, historian and political theorist, Karl Marx said, ‘The worker need not necessarily gain when the capitalist does, but he necessarily loses when the latter loses.’

Consequently, when aspirations for a middle ground decision which appeases the ACTU at $43/week is weighed up against the beleaguered manufacturing and retailing industry’s request for a $13.50/week increase, the populist path could be the most dangerous.

The former is for the best part an arbitrary figure intentionally aimed high with a view to asserting upward pressure on a decision which seems most appropriate, albeit not attractive on face value for workers.

Conversely, the latter is tied to hard and fast data in the way of the inflation rate, and it could be argued that it is more likely to maintain a healthy equilibrium which could then provide the platform for productivity driven wage growth.

Granted, in theory an inflation rate tied wage increase will only allow consumers to tread water, but as Marx said this is better than drowning when the capitalists go under. 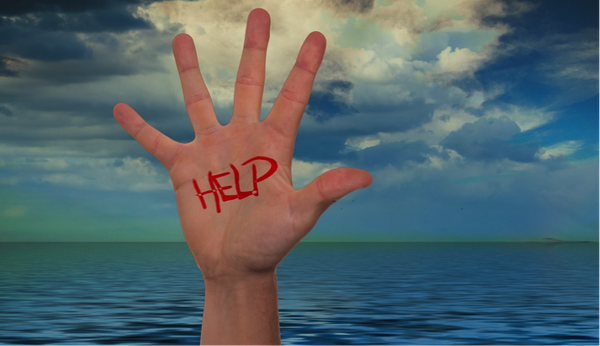 And by capitalists we don’t mean Shorten’s ‘big end of town’, it will be businesses like the local corner store, coffee shop and pub that have to review their staff roster.

Businesses are already doing it tough

Retailers and distributors of goods to the sector have already been hard-hit as evidenced in the following chart which shows the 12 month performance of the S&P/ASX 200 Consumer Discretionary Index (ASX:XDJ) against the S&P/ASX 200 Index (ASX: XJO), home to Australia’s top 200 stocks across a range of sectors.

It was in the December quarter of 2018 that a sizeable disconnect between the XDJ (red line) and the broader market (blue line) started to emerge.

There has been a slight closing of the gap since the election with voters seemingly recognising that business confidence was directly related to job creation, employment stability and eventual wage growth when the forces of economic equilibrium are allowed to shape wage movements.

The XDJ is impacted by the share price performances of the many retailers and distributors of goods to the retail sector.

Constrained spending is one of the reasons why earnings growth has slowed in the sector.