Lithium is an abundant element in the Earth’s crust but is notoriously challenging to extract and refine into a chemical product that can be used to manufacture the cathode materials used in the batteries of electric vehicles. Many new projects using both conventional and advanced technologies are currently being planned to supply lithium for use in electric vehicles, and one of the most compelling class of projects is geothermal-lithium.

The idea is simple: high temperature, lithium-rich brine from a reservoir deep within the Earth is pumped to the surface, heat is removed from the brine and used to drive a turbine to produce electricity, and lithium is extracted from the brine to produce lithium chemical products like lithium hydroxide using advanced direct lithium extraction (DLE) technology. The brine is then re-injected elsewhere into the large reservoir where it is re-heated. A number of these resources exist around the world including the Salton Sea in California, USA, and the Upper Rhine Valley in Germany. Below is a schematic of a geothermal lithium plant using a combined cycle-type system for electricity production. 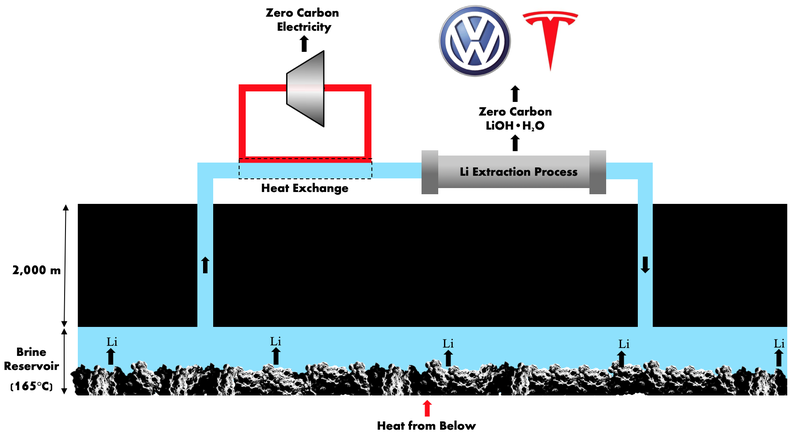 A number of developers are currently working on building geothermal-lithium plants in the Salton Sea including greenfield play Controlled Thermal Resources. Others have expressed interest in integrating DLE into existing geothermal plants including EnergySource , Berkshire Hathaway Energy, and Ormat Nevada, however they are famously secretive about their plans.

Vulcan Energy Resources (ASX:VUL) is planning to build Europe’s first geothermal-lithium plant in the Upper Rhine Valley of Germany, called the Vulcan Lithium Project, and is planning on running a pilot plant in the area in 2020-2021. (The company reported a conceptual Exploration Target at the project that’s larger than any existing European lithium resource). 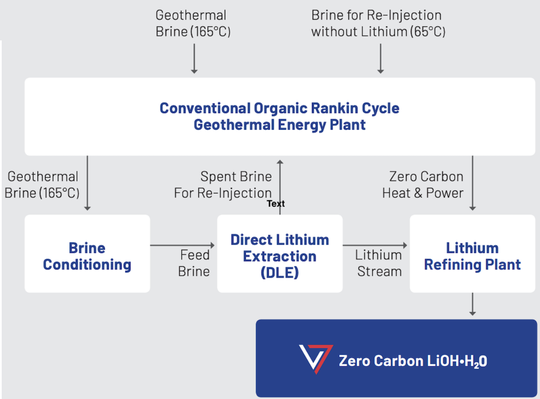 Simbol Materials commissioned a DLE pilot plant using Salton Sea brine in 2012 at EnergySource’s Hudson Ranch power plant, and were offered $325M for their project by Tesla, however the deal famously fell through when they weren’t satisfied by the offer and demanded a billion dollars.

Investors and curious engineers may wonder how geothermal-lithium projects can be competitive against more conventional lithium resources like South American salar-type brines and Australian spodumene. Geothermal lithium projects have many unique attributes that enable low or even zero carbon production of lithium chemical products like lithium hydroxide. Some of the most important attributes are:

#1 Use of geothermal heat and power to drive lithium chemical refining with zero carbon emissions and zero fossil fuel consumption.

Both heat and electricity are used in lithium extraction and refining.

There are a number of technology companies which market the ability to perform DLE with high lithium recovery including Lilac Solutions, Tenova Advanced Technologies, Adionics, EnergySource Minerals, and others, some of which will work well for geothermal-lithium projects.

The pure lithium chloride stream produced by the DLE process needs to be purified and concentrated to produce lithium chemical products like lithium hydroxide.

For the purification process, a number of inputs are needed including chemical reagents like soda ash (Na2CO3), caustic soda (NaOH), and sulfuric acid (H2SO4). Electricity is also required to run pumps and filtration systems. For the concentration process, a significant quantity of electricity and heat is required to remove water from the lithium chloride stream for recycling and to crystallise battery quality lithium hydroxide.

The geothermal plant can handily produce all of the power required, and heat is harnessed from the geothermal brine to drive the process. All the electricity and heat used in the process is produced on site and has no carbon footprint. No natural gas pipeline is needed, and no diesel or coal needs to be burned to run the process, giving geothermal-lithium projects a low carbon and potentially a cost advantage over both salar-type brine and hard rock resources which require burning of fossil fuels in lithium chemical production.

Geothermal lithium projects in the USA and Germany are both close to future battery manufacturers like Tesla and Volkswagen, respectively. This means that lithium hydroxide can be produced and only needs to travel a short distance to be incorporated into a cathode material and eventually electric vehicle battery.

Shipping is required for both salar-type brine and Australian spodumene operations. Whether it’s shipping spodumene concentrate or lithium chemical products, both kinds of operations involve inter-jurisdictional risk which can be mitigated by localising supply chains.

Many new lithium brine extraction projects in South America plan to use DLE technologies similar to those mentioned above because of their environmental friendliness, low land footprint, and low water consumption, all of which are important for producing lithium in remote, high elevation locations like the Argentine Puna.

However, these brines are found in shallow reservoirs of just a couple tens to hundreds of meters deep. When the lithium is removed from the brine, the brine containing other salts will need to be put somewhere, and if it is mixed back in with the lithium-rich brine, it will dilute the brine and complicate lithium extraction later on.

The spent brine can be evaporated or pumped to another basin for re-injection, but the geology of this process can be complex and is far from settled. Lithium extraction from hard rock resources like Australian spodumene don’t have this problem, but they do produce waste when the spodumene is concentrated from the source rock and when the lithium is recovered from the spodumene. Being solid, they can be removed in a way that doesn’t dilute the original resource, but this does create large quantities of waste that needs to be managed.

The best understood geothermal-lithium resources in the world are in the USA and Germany, two nations with virtually zero sovereign risk. This means investors can feel comfortable supporting projects in these countries without risk of their respective governments seizing the project or preventing development of the resource after significant capital has been invested in them. It’s interesting to compare these jurisdictions to conventional lithium producing regions like South America and Australia to appreciate how important jurisdiction is for new lithium projects.

Argentina has many high-quality lithium brines and has attracted significant investment in the last couple years, however the country is currently facing a currency crisis and the risk of lithium project nationalization is high. Bolivia also has a large lithium resource, but most observers agree that any foreign investment made into their lithium industry would almost certainly be nationalised. Chile is more investment-friendly, but the federal government makes it very challenging to develop projects there since lithium is listed as a critical mineral and its extraction is governed by multiple agencies. Australia is a safe jurisdiction to invest in spodumene mining and concentrating, but most of the concentrate that is converted to lithium chemical products is shipped to China for production of lithium chemicals, and the margins on spodumene mining and concentration are low compared to the production of battery quality lithium chemical products.

As battery quality lithium supply becomes critical to mass production of electric vehicles, European and US auto-manufacturers and governments have already signaled their urgent need for secure, domestic supply. Geothermal-lithium resources are very well placed to fill this requirement.

Below is a summary of how geothermal-lithium compares for these different attributes of lithium extraction projects.

A number of geothermal-lithium projects are currently in advanced stages of design and will likely be in operation in the next 5-10 years. Geothermal lithium is well-poised to supply low carbon lithium chemical products for the electric vehicle battery supply chain.

Anyone interested in the future of the lithium industry should pay attention to these exciting projects.

Alex Grant co-founded Lilac Solutions, one of the world's leading direct lithium extraction technology companies. He is now an independent advisor for multiple lithium projects around the world that seek to implement advanced technologies for production of battery quality lithium chemical products from unconventional resources. He has a B.Eng. from McGill University in Canada, and a M.S. from Northwestern University in the USA. He is based in California.

Grant is the Technical Advisor of Vulcan Energy Resources (ASX:VUL).