What everyone should know about Bitcoin

There has been a lot of talk about Bitcoin in recent years, both positive and negative. Bitcoin serves as an alternative currency that can be traded electronically across the Internet, free of most regulatory and business sanctions that sovereign currencies have. Bitcoin, as a protocol, was introduced in 2008 by an anonymous individual (or organisation) and gained mainstream attention in late 2013 when its exchange rate against the US dollar reached astronomical highs.

Before this dramatic spike, individuals holding units of Bitcoin were highly technical niche players, many of whom say they became involved in it purely for fun. Within a few short months though, the value of Bitcoin rose over 10,500% and many cashed out by trading their Bitcoins for USD. It certainly made some people wealthy and created a big problem for Governmental tax agencies looking to formalise tax rules for Bitcoin arbitrage.

However, it put Bitcoin on the map and created a wave of businesses harnessing Bitcoin’s decentralised nature.

Though Bitcoin wasn’t the first virtual currency, it was the first truly self-sustaining medium of exchange.

The key then for introducing people to Bitcoin is exchanges.

How does the exchange work?

These private companies, like any other exchange, offer variable buy and sell prices for currencies and are the first step to entering the Bitcoin community. Before receiving Bitcoin, one must have a “wallet address” which is similar to a BSB and account number at a regular bank, a unique string specific to each user. As the Bitcoin business environment has evolved, many exchanges have also begun offering online wallets secured by usernames and passwords like any other online account so as to be a one-stop shop for Bitcoin purchases.

Like banks, users entrust their holdings to the institution offering the wallet service.

However, given the relatively unregulated nature of Bitcoin businesses, distrust has developed among critics of Bitcoin’s viability as a trustworthy technology.

The infamous Mt. Gox saga saw millions of dollars worth of Bitcoin, held by the company dissolved and its customers left with questions unanswered. Speculation suggests the CEO of Mt. Gox withdrew all customer holdings, claiming bankruptcy due to a cyber hack, meanwhile laundering the Bitcoin offshore and disappearing with said millions. 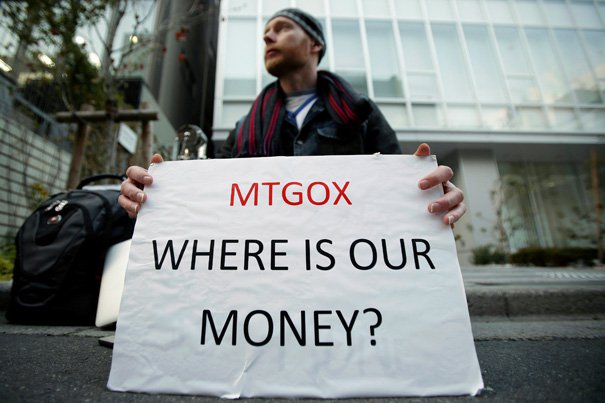 The MTGOX saga left a sour taste in people’s mouths.

The underlying foundation of Bitcoin payments is what’s called the blockchain. Essentially, the blockchain is a public ledger of all transactions made since inception. Deep down it is a highly sophisticated cryptograhphic protocol, which is designed to ensure no transaction results in double spending. Simply put, each time a Bitcoin transaction is initiated, a unique alphanumeric string is spawned which is verified by independent computers broadcasting random combinations of similar strings until it eventually matches with the transaction itself.

It’s at this point Bitcoin is transferred and its information posted on the blockchain ledger.

In its early days, a Bitcoin transaction could take several days to be authenticated. This is because there were not many computers broadcasting random strings to the Bitcoin protocol in real-time. As the number of these computers, referred to as ‘miners’ rose, the authentication times fell and today transactions can take as little as one second to complete. Bitcoin miner machines compute strings automatically and when a miner authenticates a ‘block’ of transactions, it is rewarded with a quantity of new Bitcoins. This effectively serves as the supply of the currency much in the same way a Federal Reserve will increase or decrease money supply in an economy to manipulate activity.

One major difference in the supply of Bitcoin versus a Federal Reserve’s cash rate is the algorithmically-set limit on new Bitcoins entering the economy. Each time Bitcoins are rewarded to miners, a counter brings it closer to a mathematical milestone at which point the quantity of Bitcoin rewarded per block solved is halved. Statistically Bitcoin supply will never end but the rewards will infinitely continue to be halved. At its inception, each block solved had a reward of 50BTC. By 2012, it fell to 25BTC and will most likely hit 12.5BTC in 2016 provided a linear continuation of transactions conducted throughout.

While technically supply will never end, given the halving nature of Bitcoin rewards, there will only ever be 21 million Bitcoins put into rotation given its limit of 8 decimal points. At time of writing, there were 15,289,650 coins in existence, a combined market value of roughly US$6.2 Billion. 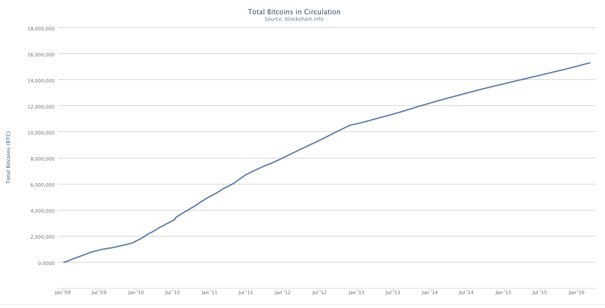 Total Bitcoins in circulation has risen.

In terms of economics, different Governments have classified Bitcoin differently, some as a commodity, some as a digital asset. It’s criticisms range from being overly volatile, displaying traits of a speculative bubble and even as a potential Ponzi scheme. Despite the negativity, Bitcoin has been adopted as a payment method by a number of legitimate companies. They include: Paypal, Microsoft, Dell, Virgin Galactic, Time Magazine and Newegg, among others. Endorsements have come from distinguished technology/businesspeople such as Bill Gates, Peter Thiel and The Winklevoss twins.

Regardless of its use as a currency, Bitcoin has spawned a new generation of businesses either in transactions, blockchain-based verification protocols and countless alternative ‘coins (Altcoins). To date, over $1 Billion of venture capital has flowed into Bitcoin-specific businesses, be they Bitcoin ATMs, wallets, exchanges and even debit cards. This figure is exclusive of blockchain, Altcoin and other Fintech business models created in the shadow of the now-famous Bitcoin whitepaper that started it all. If nothing else, it’s opened up a new way of thinking about money and it ultimately aims to empower people with technology.