Europe lockdowns send Zoom even higher, Tesla falls 30% but has an eye to the future and … why is MYQ in suspension?

It’s that that time of the month when analysts and trading platforms release their top stocks for the period.

Global multi-asset investing platform eToro has shared its Australian figures when it comes to the top traded September stocks on the platform.

According to the data, Australian retail investors piled into tech stocks in September as they prepare their portfolios for the upcoming holiday season. 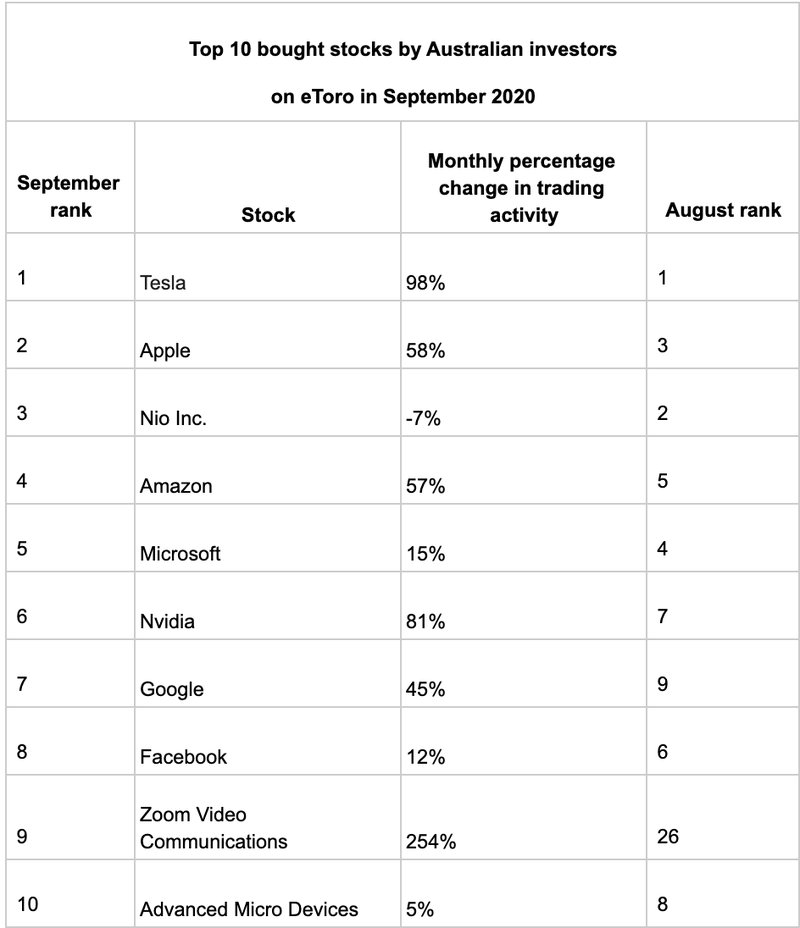 Tesla continued its dominance as the most invested stock by Australian investors in September. The electric vehicle giant had a volatile month, with its share price falling as much as 30 per cent at the start of the month before finishing down around 9 percent. With a 98 per cent increase in trading activity, it’s clear that many investors saw this recent dip from Tesla as an opportunity to get their hands on this stock at an attractive price. At the end of September, Tesla disappointed investors with its battery day. The event was heavily hyped by Elon Musk, with many analysts raising price targets for the stock as a result. However, many of the promises made by Musk were a long way off and may require a lot of work.

Apple saw a 58 per cent increase in trading activity in September, taking the spotlight from Nio Inc. In mid-September Apple announced a host of new product launches, with many investors disappointed that the iPhone 12 wasn’t amongst the line-up. This time of year is very strong for Apple, with the holiday season just around the corner and a 13 per cent drop in September. Many investors have clearly seen this as a great opportunity to purchase Apple shares.

Nio Inc’s trading numbers fell in September compared to August. Like Tesla, Nio Inc. sold off at the start of September, losing around 15 per cent. With increased tensions between the US and China, including the ‘bans’ looming on Chinese apps, many investors felt anxious with any stocks exposed to China or Chinese stocks listed in the US. As Nio Inc. is a speculative stock compared to Tesla and has only been listed since 2018, many investors are more likely to be cautious about buying its stocks when it dips compared to big names like Apple and Tesla.

Nvidia’s trading numbers increased by 81 per cent in September, likely to be caused by its pending acquisition of Chip Designer Arm Holdings from SoftBank for $40 billion. Arm creates chips that are used in phones and are set to benefit from Apple shifting its computers from Intel Chips to that of Arm’s design. This could be a massive coup for Nvidia, as it will also allow them to grow in the AI space. Even with this M&A news, Nvidia couldn’t avoid the Nasdaq sell-off as it finished down 2 per cent for the month.

Zoom continued to outperform the market in September, climbing around 3 per cent as most of the tech sector sold off, taking Zoom’s YTD gain to around 584 per cent. In early September, Zoom announced another blockbuster earnings report, with revenues increasing by 355 per cent year-over-year. Zoom shares then jumped higher at the end of September as increased COVID-19 cases and looming lockdowns continue across Europe. With a huge increase of 254 per cent in trading numbers throughout September, we can clearly see that investors believe Zoom still has a huge part to play in the remote work space over the next few months. As Zoom’s earnings reports have been historic over the last two quarters, it will be important to see whether they can sustain this growth going forward.

This week, the company made further advancements in its new in-device technology capabilities.

While the predicated medical images are not a 100% replacement of an actual medical scan such as Dual Energy X-ray Absorptiometry (DEXA), they are highly correlated and representative of the actual DEXA scans performed on the medical imaging machine.

Not a day after making that announcement the company went into trading halt. Then it was suspended from trading, pending ASX approval of a new announcement.

Whatever the news is, we look forward to seeing it drop (barring ASX approval) on Monday, when the company is set to resume trading.

The company’s shares have increased three-fold in the past month.

EMN remained in the green this week, following last week’s ride on the news that Tesla would be using 33% manganese in its batteries moving forward.

EMN started the week at 19 cents, peaked at 27 cents on Wednesday, before finishing back at 19 cents; one of many companies that came back down as the market responded to Donald Trump's COVID announcement.

In all the excitement surrounding Tesla, investors may have missed the appointment of Tom Stepien, CEO & Co-founder of Primus Power, to EMN’s Board of Directors. Other recent appointees include Thomas Glück as Chief Technology Officer and Andrea Zaradic as Vice President, Operations.

Of the appointments EMN CEO and President Marco Romero said, “We are delighted to promote Andrea Zaradic to the key senior management position of Vice President, Operations. Her strong technical, leadership and project management skills have been clearly in evidence since she joined our team in early 2019. She is perfectly suited for this role as we enter the exciting and demanding next phase of the Chvaletice Manganese Project development.

“We are also very pleased that Thomas Glück has assumed the role of Chief Technology Officer. He has been a valuable member of our team for four years and will now focus his attention on the technological aspects that are critical to the success of the project. He will support our team to achieve excellence in its mission to competitively produce exceptional quality manganese products, made in the most sustainable manner.”

Of the ASX top 100 stocks, Reliance Worldwide Corporation was up over 8 per cent, followed by Whitehaven Coal up just under 8 per cent and Flight Centre and Boral up over 7 per cent so far this week. The worst performers include The a2 Milk Company, down over 18 per cent after analyst downgrades and Transurban and Bank Of Queensland, down over 5 per cent and 7 per cent respectively.

According to Wealth Within’s Dale Gillham, “Earlier in the week, despite trading higher, the All Ordinaries Index looked weak, which was confirmed with the market falling over 2 per cent on Wednesday, effectively wiping out the gains of the prior four trading days.

“Last week I mentioned that it is part of normal market fluctuations for price to move in the opposite direction for a period of time before continuing the longer-term move, which seems to be the case this week. Unless the market closes higher today (Friday), I see no reason to change my opinion from last week. Therefore, while we may see the market trade up for another week, it is more likely that the market will trade down next week into the low, which is expected to be below 5,800 points and possibly as low 5,400 points.

“The good news is that I expect 2021 to be a much better year for the Australian market, with many stocks setting themselves up to present some good buying opportunities.”