The concept of ethical investment has taken some time to gain traction. Early in the piece investors had trouble coming to grips with a company focusing on profitability and ethics — whether environmental or social — at the same time without compromising on performance.

Whether it be manufacturing or service provision, the word ethical seemed to carry the not-for-profit tag — employing methods that were beneficial for the environment or humankind, but at the same time costing well in excess of competitors who were simply focused on reducing costs to achieve the best bottom line result.

In recent years, however, several factors have come into play that have not just clarified some of the misconceptions around ethical investing, but have acted as catalysts for what is now a burgeoning new industry gaining momentum by the day.

The vast majority of superannuation funds now offer members the option of investing their capital in companies that meet certain requirements regarding environmentally or socially responsible practices. Likewise, there are ETFs available which solely focus on accumulating a portfolio of such stocks.

ASX listed Australian Ethical Investments (ASX:AEF) invests solely in stocks that it deems as ethical. Of course, what is and isn’t ethical is open to interpretation, but we have provided readers with an example of the industry segment areas the company considers ethical in Figure 1 below, as well as a selection of stocks they hold in their portfolio. 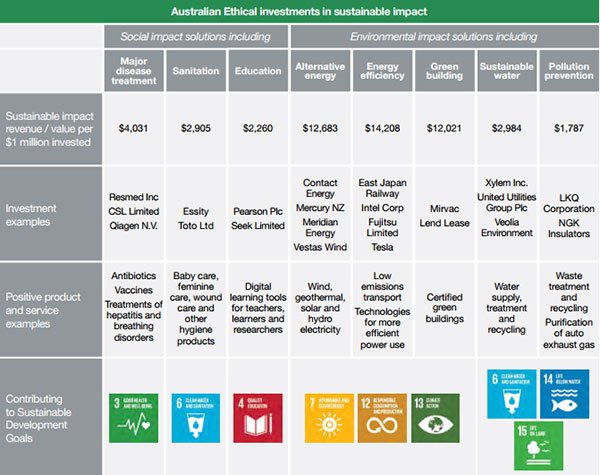 As superannuation funds have a mandate to limit their investment to the ASX 200 index, most of these companies are large blue-chip multinationals and some are only listed on overseas exchanges, making it difficult to invest directly in those stocks.

The likes of CSL, ResMed, Seek and Lend Lease trade on very high multiples, suggesting that there is merit in looking for companies with similar profiles currently flying under the radar.

As shown in Figure 2 (below), this is certainly a sector worth gaining exposure to. AEF’s share price performance over the last five years represents compound annual growth of 50 per cent. 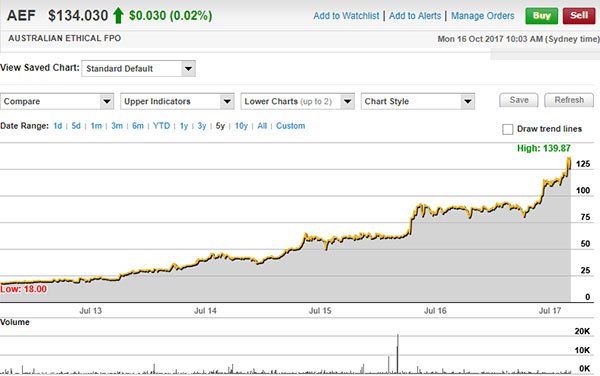 Using this model, Finfeed has identified five stocks — one for each subsector — as displayed under the Environmental Impact Solutions banner. Tomorrow in part 2 of our ethical investment coverage, we will tackle the Social Impact Solutions segment, providing some investment ideas that fit those criteria.

Before we look at the following stocks, it should be noted that investors considering these stocks should take their personal situations into account and seek professional financial advice before making an investment decision.

As indicated above, AEF’s investments in these areas cover multi-billion dollar enterprises that offer exposure to alternative forms of energy such as wind, solar and hydro.

One interesting emerging form of alternative energy is wave energy. A concept that works along these lines is Carnegie Clean Energy (ASX:CCE) which has developed the CETO wave energy intellectual property and is also 100 per cent owner of leading Australian battery/solar microgrid company, Energy Made Clean (EMC). That makes CCE the only company in the world to offer a combination of wave, solar, wind, storage and desalination via microgrids.

Early this month, CCE won a $15.7 million tender to deliver a wave energy project at Albany in Western Australia. In conjunction with this was a $16 million grant from the Western Australian government, effectively demonstrating its support for what it sees as an emerging industry.

This development has been the catalyst for a significant share price rerating, but this is off a low base and there may be scope for further upside.

One of the smaller emerging technology companies in the energy efficiency space is Ultracharge (ASX:UTR).

Having achieved success with its battery storage technology, as well as acquiring exclusive licenses and negotiating relationships which will see it considerably upscale its production capacity, the company’s shares doubled between July and August.

While they have partly retraced since then, this appeared to be a function of profit-taking rather than a loss of faith in the technology.

In fact the company’s technology has received increasing support in recent weeks as UTR announced it would be upscaling its production of nanotube material for its pilot project with one of the world’s leading energy storage solution companies, Leclanche — a development that could increase UTR’s production capability, and meet more of the growing demand.

Quantify Technology (ASX:QFY) is an early mover in the IoT market, developing applications in residential and commercial ‘intelligent’ buildings. The company develops hardware and software devices that enable the monitoring and management of the next generation of internet-enabled devices (such as lighting, power, heating and cooling systems) installed in buildings.

QFY’s patented flagship product, the Q Device, provides real-time evaluation of environmental and risk factors for building occupants, as well as proactively managing services and utilities to ensure the highest levels of energy efficiency are achieved.

Early in October the company signed an agreement with Harvey Norman Commercial Division (HNCD) to promote and sell its products into commercial and residential development projects throughout NSW and the ACT; not just an endorsement of the company’s products but a platform for accelerated revenue generation.

Phoslock Water Solutions (ASX:PHK) produces Phoslock, a patented technology which was developed by the CSIRO. PHK has lodged a subsequent patent application to protect the core technology which is in an advanced stage of being granted in approximately 50 countries, which would enable the company to extend its core technology patent to 2033.

Phoslock is a unique water treatment product that binds phosphorus in water bodies such as lakes and dams, providing a protective permeable layer to sediments, permanently preventing the rerelease of phosphorus and reducing the level of algae.

This improves water quality, both for human use and aquatic life as well as preventing and controlling harmful algae blooms. PHK recently formed a new company, Phoslock Beijing, to focus on both engineering solutions for water environment projects as well as addressing its usual areas of water remediation. The company is on the verge of commencing its largest ever project in an inner-city canal in a major Chinese city.

Tox Free Solutions (ASX:TOX) is one of the largest integrated waste management, industrial services and environmental businesses in Australia, offering a full range of waste management services through its national network of licensed waste treatment facilities.

The company’s key markets are Health, Industrial, Regulatory and Resources. TOX was awarded contracts to the value of more than $100 million in fiscal 2017, and it also acquired Daniel’s Health — Australia’s largest provider of healthcare waste treatment services.

This will see TOX play an important part in managing the collection and disposal of acute disease-carrying sharp products such as needles, as well as clinical waste management, a significant growth area. The company has a blue-chip client base which includes Shell, Inpex and Fortescue Metals Group.