Dow takes a breather as stunning debut by Snap.Inc. steals the show 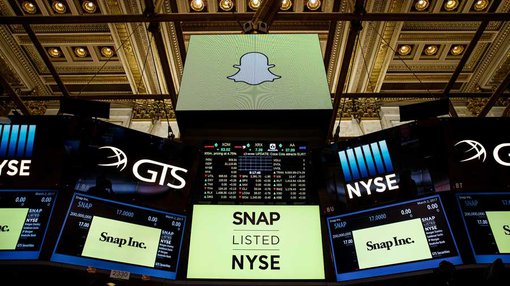 Some called it a breather, others a reality check, but regardless of the terminology most market commentators saw the 0.5% retracement in the Dow as a healthy development. The index closed at 21,002 points, down from the previous day’s all-time record close of 21,115 points.

There was also selling across the NASDAQ as it fell 0.7% to close at 5861 points.

From a stock specific perspective there were two key developments, one being the highly successful Snap.Inc. IPO, which opened up 40% and kept running.

However, the news wasn’t so good for Caterpillar Inc. as its shares slumped following an announcement that it was under investigation by the Internal Revenue service, the Commerce Department and the Federal Deposit Insurance Corp.

The company’s shares have traded strongly over the last six months on the back of an anticipated uptick in demand for heavy machinery resulting from increased global mining activity and infrastructure development in the US under the Trump administration.

European markets were flat with the FTSE 100 relatively unchanged and falls of less than 0.1% in the DAX and the Paris CAC 40.

Some of the big moves were on the commodities front as oil fell 2.2% to finish at US$52.66 per barrel.

Gold also came off substantially, declining 1.2% to close at US$1235 per ounce.

Base metals took a big hit overnight with copper falling more than 1% to finish at US$2.69 per pound.

Nickel fell approximately 2% to US$4.85 per pound.

Zinc retraced to an early February low of circa US$1.26 per pound. Lead also came off more than 2% to close at US$1.02 per pound.