DOW heading towards 20,000 but will the Federal Reserve intervene

Since the US election was held 8th November the market has rallied to new highs.

Dubbed the ‘Trump Rally’, the Dow Jones Industrial Average has climbed from 19,614 on Election Day to reach a high of 19,951 on 13th December. 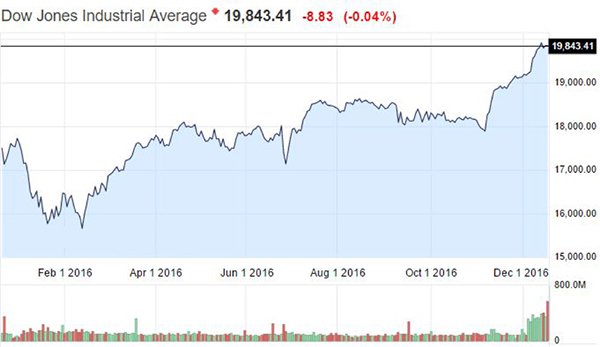 The market is pricing in expectations that the Trump presidency will be bullish for the US economy with a focus on rebuilding the nation’s deteriorating infrastructure and bringing jobs back to its shores.

Where the market goes to from here is anyone’s guess, however with the global economy integrated like never before a rise or fall in the DOW could be dependent on events in Asia or Europe and not have anything to do with who heads up the US presidency.

Whilst central banks around the world have been adopting a loose monetary policy, the US Federal Reserve has recently gone in the other direction, contrary to their track record of keeping the interest rate near zero percent.

Will the Federal Reserve bust the stock rally?

Making it only the second rate rise in the past decade, the last rate rise coming a year ago in December 2015 when rates moved from a record low 0.25% to 0.5%.

Fed Chair Janet Yellen has talked up the case for making three further rate rises in 2017, but is this realistic or just optimistic?

Many analysts have accused the Federal Reserve along with other Central Banks around the world for driving cheap money to inflate particular markets.

None more so than the stock market.

Following the 2008 financial crisis, the Fed adopted what has been referred to as ZIRP (zero interest rate policy).

By having rates pinned under 1% it has encouraged big players to borrow money for cheap and speculate.

This speculative money tends to chase liquid investments, hence the stock market rallies on the news of quantitative easing policies.

If rates continue to rise speculators will be forced to cover their positions and liquidity in the markets will likely dry up.

Essentially the Fed has backed itself into a corner whether it realises it or not.

So much so that Yellen is one day talking up raising rates and then in another speech goes on to talk about how negative interest rates are a possibility should the economy turn sour.

Judging by this and the decade prior where the Fed continually said it would raise rates but didn’t, the Fed has clearly become a reactive force to whatever the stock market is doing.

Even though the stock market is not a true representation of the overall economy, it’s the barometer being used by the Fed to base its monetary policy on.

If the DOW breaches 20,000 and continues to rally we should expect to see further rate rises.

On the flipside, a fall in the DOW would likely see the Fed keep rates on hold.

With the extreme case being a plunging market resulting in rate cuts all the way past zero into negative rate territory as the Fed has said it would do if required.