On examining share price movements of stocks that presented during Diggers and Dealers week, it would be fair to say that the mood was cautious.

Held every year in Kalgoorlie, the Diggers and Dealers conference brings together resource investors and companies that want their story better understood and perhaps attract some capital.

Indeed, the event is well supported by the top end of town with leading brokers, accountants and other industry service providers hosting functions where deals are done; not necessarily dirt cheap.

Big share price moves aren’t unusual in conference week. It is somewhat of an unexplained phenomenon the way important company news often seems to emerge just as the managing directors are preparing to give their presentation.

However, while the extent and the quantum of the share price increases appeared to be more subdued than usual, FinFeed ran the ruler across the stocks that presented during the week and a number of trends became evident.

To put these share price gyrations in context though, one needs to examine external factors leading up to the conference and during the week that to some extent neutralised what could have been fairly significant price movements.

This was particularly the case when examining stocks in the base and precious metals space. On one hand, base metal stocks had a stellar run leading into the conference, and this continued until the Wednesday, at which point we saw some steep falls in copper and zinc.

Of course, as with all minerals exploration, success is no guarantee – consider your own personal circumstances before investing, and seek professional financial advice.

To highlight the extent of the run in base metals, four weeks prior to the conference, copper was trading at US$5,780 per tonne and zinc was sitting at US$2,774 per tonne.

On the Wednesday of conference week, copper hit US$6,463 per tonne, a gain of nearly 12 per cent.

While the increase in zinc was a more moderate six per cent, this built on a substantial run which began in June when the metal was trading in the vicinity of US$2,430 per tonne. Putting that in perspective, the zinc price rallied circa 20 per cent in the eight weeks leading up to its mid-conference high.

By contrast, gold was the winner. Not only did it have momentum throughout most of July, increasing from circa US$1,200 per ounce to US$1,270 per ounce at the end of the month, but a slight pullback at the start of August led to share price retracements that made some of the good stories that came out of Diggers week look even better value.

The following chart demonstrates the relative outperformance of the S&P/ASX 200 gold index (XGD) against the S&P/ASX All Ordinaries (XAO) index during Diggers week. 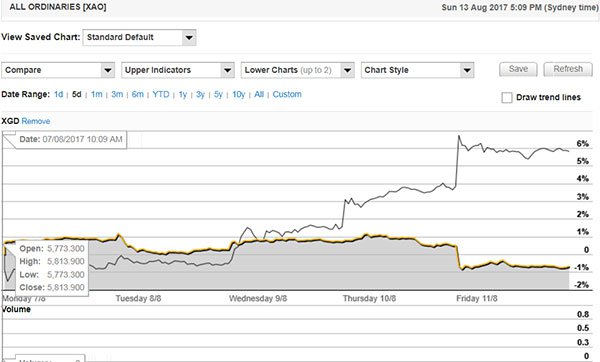 Throw into the mix a US$40 per ounce spike between Wednesday and Friday, and gold stocks were well on track to being the main beneficiaries — particularly as investors cashed in their base metal chips and jumped back into gold.

One other interesting takeaway from the week was highlighted by analysts at Far East Capital. In assessing weightings of sectors represented in the company charts, hyped up metals such as lithium and cobalt were towards the back of the field.

The other interesting aspect was the 23.1 per cent weighting in gold producers as opposed to 9.5 per cent in gold exploration. Often this trend is reversed as investors target emerging stories or stocks that have been floating under the radar. Once again though, this can probably be partly attributed to this year’s more conservative mood.

From an overall perspective, the sentiment oscillator generated by Far East as shown below makes interesting reading. 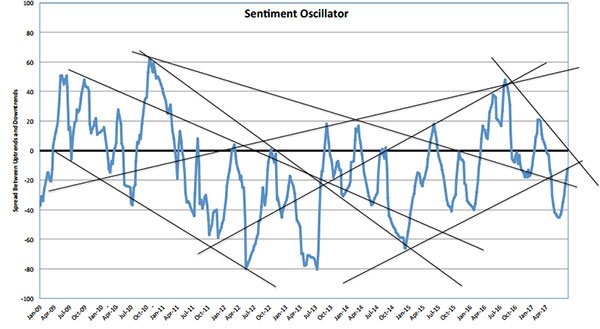 Discussing these trends, Far East Capital analyst Warwick Grigor said, “The number of stocks breaching shorter term, six-month downtrends is increasing, and looking at the pattern developing on the oscillator we see that there might have to be some work around these levels before the real fun starts and there is a breakout into clear ground”.

Tomorrow, we will take an in-depth look at the five best performing stocks during Diggers week.