As every girl knows, diamonds can make the best of friends.

Beautiful, exotic and virtually indestructible, diamonds are used in jewelry as well as industrial uses more familiar to mining aficionados.

In the world of commerce and industry however, diamonds are causing angst and controversy. That’s just not what friends do.

Currently, the diamond industry produces a total of $19 billion worth of rough diamonds each year with an increasing amount allocated for jewellery, estimated to be worth $80 billion in global sales annually. Rough diamond sales grew by 12% last year topping $20 billion in value.

Over 65% of all rough diamonds are sourced from Africa with 30% made into gems for jewellery manufacture while the remaining 70% are sold for industrial applications including cutting, drilling, grinding and polishing for use in big industry.

Development of new diamond mines is now slowing and with three new mines beginning production last year, the prospect of additional supply has not brought down prices.

De Beers and ALROSA remained the largest sellers of rough diamonds in 2014, accounting for 56% of global sales by value between them.

According to the ‘Diamond Insight Report 2015’, “the result of these new mines coming online will be a moderate increase in diamond supply in the next few years. But, towards the end of the decade, when many existing mines will begin to see declining outputs, overall supply is likely to plateau”.

Rough-diamond prices have fallen about 18% this year and are heading for a sixth straight quarterly decline, the longest streak since at least 2004, according to data from UK-based WWW International Diamond Consultants.

Jumbo diamonds at the ready

Individual rough diamonds worth in excess of $20 million after cutting and polishing, are occasionally found as part of mining operations.

An internally ‘flawless’ 100-carat emerald-cut diamond sold for $22 million at a Sotheby’s auction in April. 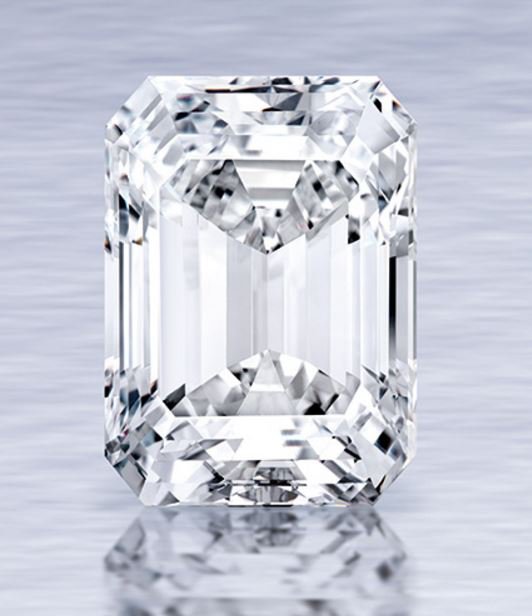 100-carat ‘Perfect Diamond’ in a classic Emerald-cut. Sold for $22.1 million at Sotheby’s

Very recently a 187 carat diamond was found by Rio Tinto at its Diavik mine in Canada’s Northwest Territories. 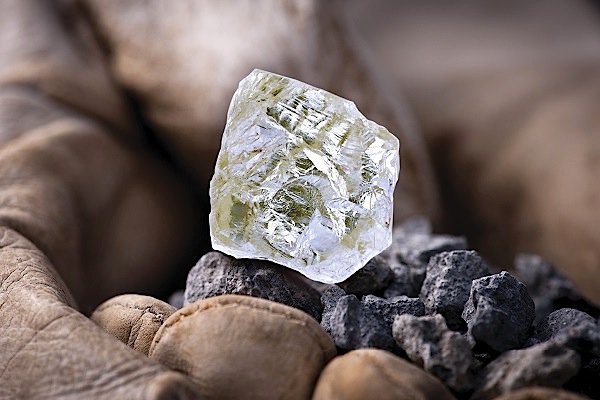 187-carat diamond found by Rio Tinto at Diavik mine in Canada’s Northwest Territories. 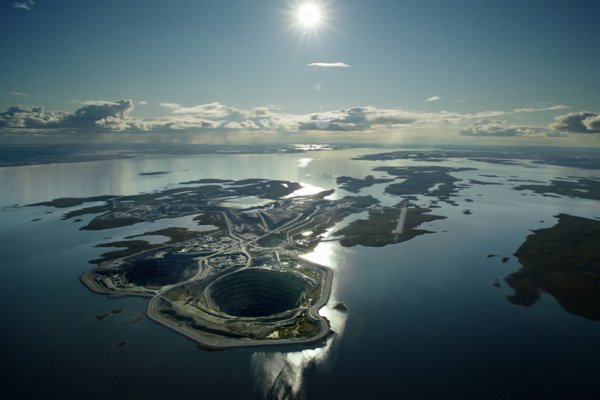 Aerial view of Rio Tinto’s Diavik mine in Canada

Meanwhile in Botswama, a 1,111 carat gem-quality diamond, second in size only to the Cullinan diamond cut into the British crown jewels, has been unearthed by Lucara Diamond Corp in Botswana.

The Type-IIa stone, just smaller than a tennis ball, is the largest diamond discovery for more than 100 years. It was recovered by machines at the south lobe of Lucara’s Karowe mine.

Lucara Diamond Corp.’s stock soared by 37% on the news last month, which was the company’s second significant find after a 813 carat stone (sixth largest ever) was unearthed earlier this year.

Coins have two sides, and so does the diamond industry

With so much media attention on recent jumbo rough diamonds, there are others who see the diamond industry in complete turmoil. 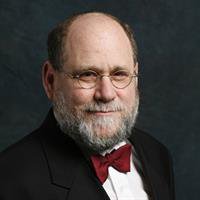 Mr.Rapoport claims rough diamonds have been “manipulated to artificially high, unsustainable levels” by De Beers. “De Beers must immediately inject liquidity into the diamond trade by reducing rough diamond prices 30–50 per cent. There is no justification for rough prices higher than polished diamond prices. Without a viable, profitable and sustainable diamond trade distributing their diamonds, De Beers diamond mines are worthless.”

In other research, William Wu from Berkeley University presented a topic titled, De Beers – Rulers of the Diamond Industry The Rise and Fall of a Monopoly Mr. Yu alleges De Beers have been surreptitiously raising prices through artificial supply shortages and other less tangible interference such as enforcing an opaque ‘sightholder’ system, collusion with business partners and antitrust practices.

Diamond Where Art Thou?

Despite operating under an non-competitive structure, designed and implemented by De Beers and its affiliated network of diamond producers, the diamond industry has flourished since the early 1900s when Ernest Oppenheimer set in motion several of the aforementioned practices that exist to this day.

In 1910, Henry Oppenheimer was quoted as saying “common sense tells us that the only way to increase the value of diamonds is to make them scarce, that is to reduce production,” according to Tom Zoellner’s book, The Heartless Stone: A Journey Through the World of Diamonds, Deceit, and Desire published in 2007.

The evolution of the diamond industry does beg the question – just how widespread and cheap diamonds could have been?

The answer, it seems, is that if the diamond market was left to its own devices; drilling as part of resource exploration would be vastly cheaper while millions of consumers could claim to have a diamond as a friend.