More than 30% of all applications used on laptops, mobiles and tablets have a critical vulnerabilities, that can be easily compromised for sensitive data, according to a cyber security report published by Hewlett Packard Enterprise (NYSE:HPE). HPE is a multinational technology company worth around US$25 billion, providing a wide range of IT solutions for corporate clients around the globe.

HPE’s annual Cyber Risk Report is designed to provide a better understanding of the threat landscape which all businesses now face and help them to minimise security risks in their operations.

Keen to address these challenges, start-up cyber security companies have hastily come to the fore considering the huge gap between what companies expect in terms of security and what they’re actually getting.

This year’s report focuses on the widening range of threats including open-source, mobile and the Internet of Things (IoT), noting that cyber-attacks are growing in frequency and severity.

“In 2015, we saw attackers infiltrate networks at an alarming rate, leading to some of the largest data breaches to date, but now is not the time to take the foot off the gas and put the enterprise on lockdown,” said Sue Barsamian, Senior Vice President and General Manager at HPE. “We must learn from these incidents, understand and monitor the risk environment, and build security into the fabric of the organisation to better mitigate known and unknown threats, which will enable companies to fearlessly innovate and accelerate business growth.”

Web applications continue to cause problems for companies although its mobile connectivity that is attracting the most focus from hackers. HPE’s research shows that approximately 75% of all mobile applications scanned exhibited “at least one critical or high-severity security vulnerability, compared to 35% of non-mobile applications”.

In 2015, Microsoft Windows represented the most targeted software platform, with 42% of the top 20 exploits directed at Microsoft platforms and applications. 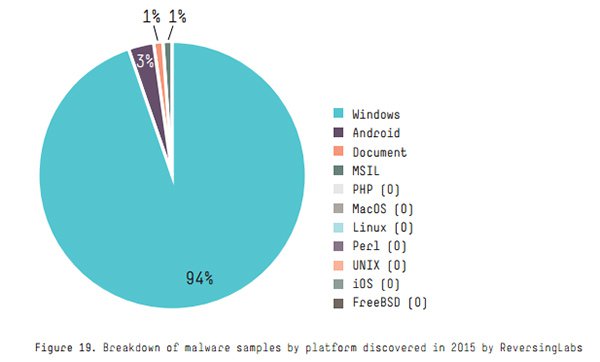 When it comes to malware, Windows is far and away the most popular target for hackers, recording 94% of all threats discovered as part of HPE’s research.

Malware has “evolved from being simply disruptive to a revenue-generating activity for attackers”. Although the overall number of newly discovered malware samples declined 3.6% year-over-year, the attack targets shifted notably and “focused heavily on monetisation”.

As the number of connected mobile devices expands, malware is diversifying to target the most popular mobile operating platforms such as Android and iOS. The number of Android threats, malware, and potentially unwanted applications have grown to more than 10,000 new threats discovered daily, reaching a total year-over-year increase of 153%. Over the course of 2015 HPE estimates that the Android platform saw a month-on-month increase between 100,000 threats in January 2015 to just under 400,000 by October.

Despite the sharp climb in Android vulnerabilities, the Apple iOS platform saw the greatest growth rate, increasing by 230%. 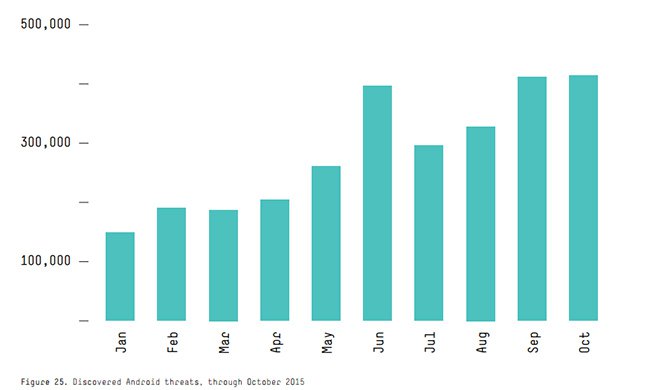 In another shocking finding, HPE detected that fraudsters are now able to bypass physical attacks on automatic teller machines (ATMs) and go directly into compromising the underlying software.

As part of its findings HPE’s report criticises the lack of action among businesses as being part of the underlying problem.

The report found that the industry didn’t learn anything about patching in 2015. The number one most exploited vulnerability in 2015, was the most exploited in 2014, and has been patched by the vendor...twice”.

Going further and firing a shot across the bows of legislators and policymakers, HPE says that “many lawmakers in the US, UK and elsewhere claimed that security was only possible if fundamental rights of privacy and due process were abridged.”

In other words, for cyber security to improve civil liberties must be curtailed.

A far cry indeed, evoking Benjamin Franklin’s heeded warning: “They who can give up essential liberty to obtain a little temporary safety deserve neither liberty nor safety.”

For a full copy of the HPE Cyber Security Report 2016, click here.