Today’s headlines would seem to make it official: the National Broadband Network is a mess.

NBN Co-chief executive Bill Morrow has admitted he is unsure if the project will ever make a profit.

“We collect about $43 per month from retail service providers for each home they sell into,” Morrow said this morning. “In order to recover costs we need $52.”

Morrow’s admission came on the back of figures released earlier today that suggested connecting individual premises to the network in some regions was costing up to $91,000.

Morrow suggested that the NBN needed “protection” from 4G and 5G networks, which are delivering faster speeds to most consumers. Mobile data providers are aggressively expanding their assault on the ailing project, with TPG splurging $1.3 billion in April on its wireless mobile data network.

The news is of particular concern to the federal government, which requires the NBN to generate profits to return on its investment and fiscal backing.

“I think government moves are going to be inevitable,” Morrow suggested. “It all depends on how serious this competitive threat is, but being an old wireless guy I can guarantee you I would have had my team seriously looking at this.”

“When they started building their FFTP network, Chorus already had a near nationwide Fibre-to-the-Node (FTTN) network in place that delivers wholesale speeds to retailers of between 30-1—Mbps,” he said.

Chorus has delivered fibre directly to 75 per cent of premises in New Zealand, which enjoys faster internet speeds than Australia.

The Australian Telecommunications Industry Ombudsman recently published its annual report for 2016-17, which revealed complaints involving the NBN had increased by almost 160 per cent.

“Complaints about services delivered over the national broadband network more than doubled, and while this is somewhat to be expected given the accelerated rollout, the increase is a cause for concern,” Ombudsman Judi Jones said on October 17. 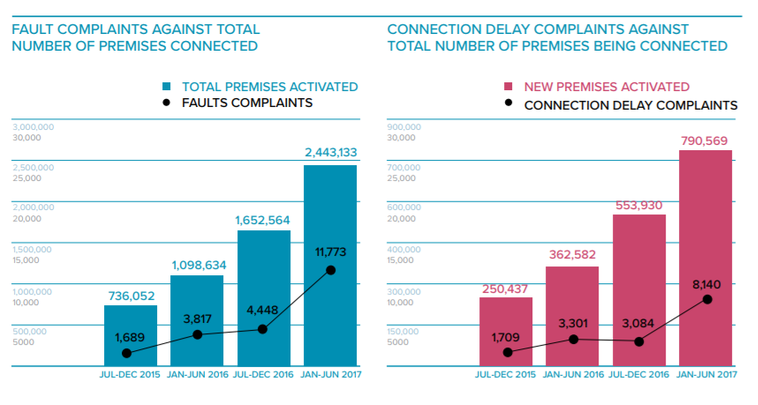 Over 27,000 complaints were filed in the past year, with 41 per cent in relation to network connection delays.

The sluggish returns of the NBN have reignited debate in parliament.

Prime Minister Malcolm Turnbull admitted that the project was a “mistake” and a “massive waste of money” during a press conference this morning.

He also questioned his decision to roll out the project under a new company, but wasted little time going on the offensive, suggesting the initial project was set up to fail.

“No one would’ve wanted to start from where Labor left us, so we have done the best we can getting that project on track,” he said. “The way Labor set it up was hugely expensive.”

“This is absolute rubbish coming from a government which said they would deliver the NBN by 2016 for $29.5 billion. It’s now blown out to $50 billion and 2016 came and went,” she said.

“When Labor came to office in 2007 Australia was a broadband backwater. We needed to do something.”