Space. The final frontier. It is where, for many years, man has longed to travel, but only a few well-trained individuals have had the privilege.

It has been at the centre of a battle between east and west; a cold war that pitted two superpowers against each other in a race that was not so much about what was beyond earth, but more about who had the superior technology, military firepower and political-economic system.

While those post World War 2 days are long over, space still brings out the competitive nature in nations, modern day entrepreneurs and even investors such as Space Angels Network a New York-based investor in early-stage private space companies.

Some of the companies making waves in space tech are Planetary Resources, company that intends to mine asteroids for minerals, and Planet, a San Francisco firm that launches small satellites to gather images of the Earth. ASX listed Sky and Space Global (ASX:SAS) is determined to meet global communication needs via the launch of nano-satellites.

It should be noted here that investment in these start-ups can be risky and professional financial advice is recommended before investment decisions are made.

A fastcompany.com article titled: The Next Frontier for Ambitious Entrepreneurs: Space postulates there will be 10,000 private space companies started in the next decade.

Richard Rocket, NewSpace Global’s CEO, said during a presentation at MIT’s New Space Age conference. “There are more companies emerging that are capable of sending something to space. That’s exciting because it’s going to drive down launch costs and increase launch rates.”

Names such as Elon Musk and Richard Branson have both been associated with space travel.

And it seems he is not far off. 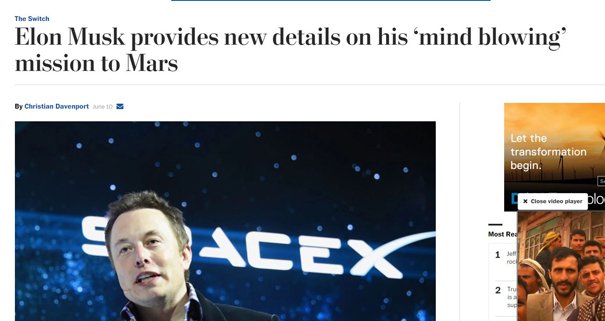 Musk’s SpaceX plans could take flight as early as 2018, with a series of an unmanned spacecraft making the trek to Mars, timed for when Earth and Mars are closest in orbit.

If everything goes according to strategy, the first human mission to Mars is planned to land in 2025.

It hasn’t all gone to strategy though:

Meanwhile, Richard Branson’s Virgin galactic flights seem a little less ambitious, they are in no way smaller focused. In fact they are as vast as space itself.

Given Branson’s profile, Virgin Galactic is arguably the best-known carrier with its sights set on commercial space in the imminent future.

“This is a very exciting time to participate in the space industry,” Branson said. “There is so much room for commercial companies to work alongside government to send people up to space, bring in new investment and prove there is a market for customers who want to go to space.”

There are many entrepreneurs and start-ups who have joined the new space race as this entrepreneur.com article will attest.

If anyone knows the trials and tribulations of an entrepreneurial venture it is Sir Richard Branson, which is why he is so willing to lend a hand to budding entrepreneurs and start-ups – as long as the product or deal is worth it.

It is no surprise then, that Virgin Galactic has signed a binding launch services agreement with Sky and Space Global (ASX:SAS), with the budding UK incorporated company to secure four dedicated missions on Galactic’s LauncherOne system from 2018.

Each of the four launches purchased will carry multiple nano-satellites which will allow SAS to rapidly establish its full constellation of up to 200 nano-satellites.

“We are thrilled to partner with Virgin Galactic on our exciting missions and LauncherOne’s first inclination launches,” said SAS CEO Meir Moalem. “Our partnership with Virgin Galactic will allow us to rapidly establish our full constellation of up to 200 nano-satellites that will provide equatorial narrowband communications infrastructure for billions of people globally. With our company now having purchased four dedicated missions upon LauncherOne, this is yet another step in our exciting journey towards our 2020 vision. Just as we value purposeful innovation and customer service, Virgin Galactic shares our values and our vision for how communication can fundamentally improve lives.”

Sky and Space Global aims to provide low cost, nano-satellite communication coverage on an anywhere to everywhere base with relatively low maintenance costs.

Communication from space may be the best way to fully penetrate that final frontier. Imagine being able to call a friend who has colonised Mars.

That is some way off and we may have to rely on Elon Musk’s uber ambition for that to come to fruition – but the space dreamers dare to dream.

Technology has travelled some distance since John Glen and Yuri Gagarin orbited the earth. So whether we can deliver low cost, cheap communication to nations that need it most, colonise Mars, set up fueling stations for space travellers or set up luxury travel agencies to cater for the coming demand of people who would rather see Pluto in space than at Disneyland, it is clear that man has taken one small step, while mankind is about to take one giant leap.