Will Codan benefit from a new era of fossicking Australia?

What could be called amateur gold prospecting is experiencing a boom, boosted by some successful finds in recent years. Take this recent success story of one prospector in the Victorian goldfields who found a 4kg nugget.

Just as the makers of picks and shovels were the winners out of the 1850s Australian gold rush, one ASX listed company Codan (ASX:CDA) has a long history of developing high-tech metal detection devices, and could be set to benefit from this new gold rush.

Especially as its equipment attracts the likes of prospectors such as Syd Pearson.

This is gold! An Aussie larrikin gold fossicker and former garbo, Syd Pearson sets out with his metal detector, discovers a 4.3 kilogram gold nugget, lights up a cigarette, throws on the Billy and the rest is history.

However, what makes this story even more interesting is that other recent events have demonstrated there are still plenty of nuggets in ‘them thar hills’, and Australians are gaining a renewed interest in gold fossicking at a time when the commodity price is attractive and metal detectors have reached a whole new level of sophistication. 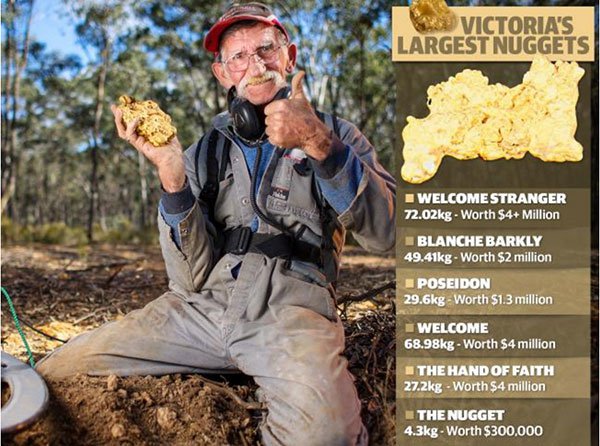 This is not only providing amateur fossickers with a professional advantage, but the new technology has improved to the extent that they are helping big miners on the global stage.

Of course ARV is still an early stage play and investors should seek professional financial advice if considering this stock for their portfolio.

While assay results hadn’t been undertaken when the announcement was made last week, ARV was able to clearly show the size of the nuggets, the largest being four centimetres long.

In commenting on what led to the find, Novo said, “The floor of the first 2 x 2 metre pit was swept with a metal detector to evaluate distribution of any gold resulting in multiple zones of coarse gold being evident”.

It is worth viewing the YouTube footage as it demonstrates the efficacy of a simple handheld device in detecting gold at the site which was in the top one metre of the 11-metre horizon.

While fossicking for gold has traditionally been extremely prevalent in Africa, there are a number of reasons why the Australian market could experience substantial growth in the near to medium-term.

Though personal prospecting has tended to be a means of income in Africa, CDA has indicated over the years that demand in the Australian market is driven by families and weekend enthusiasts, as well as keen gold prospectors.

Just as the ageing population is seen to be a significant driver of local tourism in Australia, it could be that retirees make up a substantial proportion of new age fossickers.

Syd Pearson’s story and the latest development involving ARV aren’t isolated events. In the last 12 months, a 145-ounce nugget was found in a similar area to where Pearson had success.

This was on the southern edge of central Victoria’s famous ‘Golden Triangle’, and was located only a foot below the surface. The same prospector had found a nine-ounce nugget just the day before.

CDA produces a range of five detectors priced from between US$1000 and US$10,000. The features of the Rolls-Royce GPZ 7000, which is effective at the depths referred to by Novo Resources, are shown below. 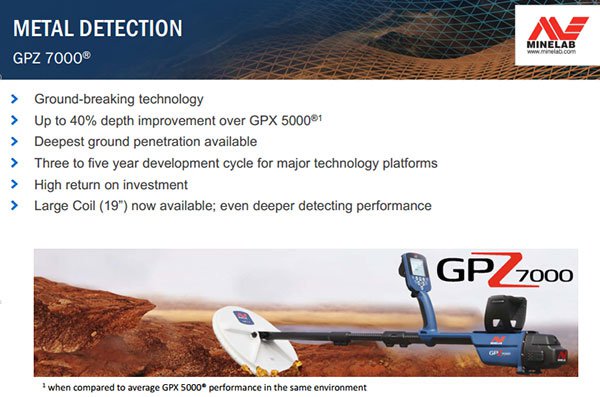 The GPZ 7000 is driving strong growth within the company, to the extent that its contribution was instrumental in driving a recent profit upgrade. The company is now forecasting a net profit of $44 million in fiscal 2017, representing earnings per share of approximately 25 cents.

These figures imply a PE multiple of approximately 9.5 relative to Monday morning’s opening price of $2.37, which appears fairly conservative given that guidance represents earnings per share growth of 100% in fiscal 2017, which follows on from EPS growth of circa 75% in fiscal 2016.

The radio communications division has been bolstered by the January acquisition of the 9300 range of military tactical antennas from Stealth Telecom FZC of Sharjah, UAE. This includes the purchase of proprietary intellectual property and tooling. And there is scope for further acquisition-led growth with the company being in a net cash position of $20 million as at April 30.

This arm of the business also provides diversification during periods of volatility in the mining sector – and combines well with the fact that CDA is highly diversified in terms of its spread of revenues across international markets:

So if, like most of us still in the workforce, you don’t have the time to go fossicking for gold – you can profit-share with the ‘picks and shovels’ makers of the 21st century via a shareholding in a company like CDA.