Inflationary pressure could increase later this year, but light is at the end of the tunnel for heavy industry prices in China. That’s according to new data out today from China’s leading business school, Cheung Kong Graduate School of Business (CKGSB). 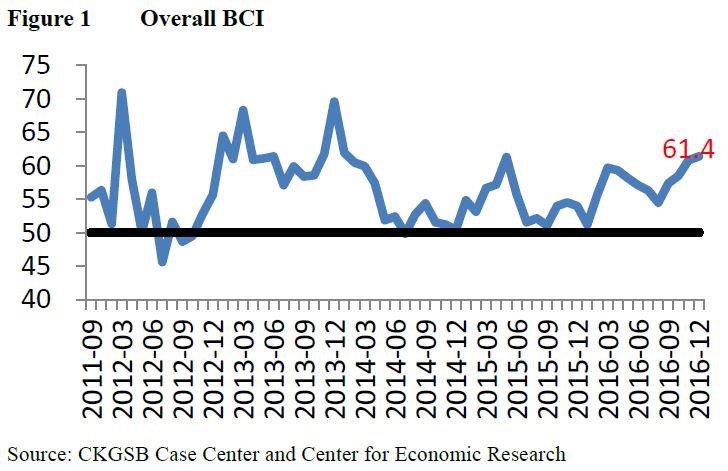 The CKGSB Business Conditions Index (BCI), which surveys executives at leading Chinese companies and asks them to forecast business conditions over the next six months, registered 61.4 in December, up from 60.8 in November, showing that for CKGSB’s sample of relatively successful businesses, optimism about future prospects is continuing to grow.

Meanwhile, the consumer prices index rose in December, from 61.1 to 64.9, while the producer prices index broke through the threshold of 50, registering 52.4. China’s National Bureau of Statistics is due to release its monthly report on the Consumer Price Index (CPI), as well as the Producer Prices for the industrial sector, later on Tuesday January 10.

Commenting on the results, CKGSB Professor of Economics Li Wei said, “The accepted view is that inflationary pressure will be minimal this year, but our consumer prices data shows that expectations of inflation ahead are taking shape. Meanwhile, an important shift has taken place this month, with the producer prices data finally rising above the confidence threshold of 50. The last time the index registered such positive prospects was in October 2014. This is in keeping with brighter prospects for heavy industry prices.”

Launched in June 2011 under the direction of CKGSB Economics Professor Li Wei, the CKGSB Case Center and the Center for Economic Research initiated a project to gauge the business sentiment of executives – the majority of whom are current or former students at CKGSB – about the macro-economic environment in China.

Established in November 2002, Cheung Kong Graduate School of Business is China’s first faculty-governed and independent business school. CKGSB boasts more than 40 full-time professors, who have earned their PhDs or held tenured faculty positions at leading schools such as Harvard, Wharton and Stanford. Their research has provided the basis for nearly 400 case studies of both China-specific and global issues. More than half of CKGSB’s 10,000+ alumni are at the CEO or Chairman level and, together, their companies accounted for one sixth of China’s GDP in 2015.