On Tuesday two would-be burglars got more than they bargained for when they entered Chainsaw Johnny’s residence.

The burglars had no joy at John Smith’s house as he first brandished a Viking style Trident in defence which sent one of the offenders running. This prompted the other offender to throw a tyre lever at Smith, which in his words finished up hitting the other accomplice, ‘ol’ mate’.

Still willing to chance their luck, the burglars attempted to steal a car, only to be confronted by Smith, this time wielding a chainsaw.

Perhaps there is something in the name. Who can forget Jack Nicholson’s famous line in Stanley Kubrick’s movie, The Shining?

Wendy Torrance played by Shelley Duvall had to face the onslaught of Jack Torrance (Jack Nicholson) as he smashes through the bathroom door with a firefighter’s axe shouting eerily, “Here’s Johnny”.

Of course the two Johnnies were on opposite sides of the law, but that’s academic in the scheme of determining how the average householder, shop assistant or security guard deals with the issue of everything from home invasion through to the destruction of vital infrastructure.

The fact of the matter is that most householders aren’t going to be reaching for a chainsaw, and while the odd shop assistant has taken to would-be robbers with baseball bats and the like, the issue of security and protection is a specialised field.

Here is some alarming data from 2016 released by the Australian Bureau of Statistics.

This is the highest number of victims recorded nationally over the seven year time series. Around a third of these thefts (34%) occurred from a retail location (182,480 victims), one in five (20%) occurred from an outbuilding, or residential land (107,857 victims)’.

There is also a heightened level of concern regarding Homeland Security throughout the world, and only this week Prime Minister Malcolm Turnbull reaffirmed his commitment to strengthening Australia’s position by integrating departments such as Attorney General, Australian Federal Police, ASIO, Australian Border Force and Immigration.

The need to secure and protect essential services infrastructure is also a key priority, particularly in light of increasing terrorist activity.

Companies that stand to benefit from providing security equipment and services

Finfeed.com profiles two companies that are active in this niche market which has definite barriers to entry because of regulatory controls.

Importantly, both companies have established relationships with prominent multinational clients, providing predictability of revenues on a near to medium-term basis.

It should be stated here that if considering these stocks for your portfolio, professional financial advice should be sought for further information.

FFT Secure Point provides commercial and residential customers with access to a high performance, enterprise level perimeter intrusion detection system. With regard to the company’s larger clients, they include oil and gas distributors seeking identification of third party interference in relation to supply networks such as pipelines.

Deployed by some of the most security conscious industrial, military and government organisations in the world, FFT’s security systems detect and locate perimeter intrusions, identify third-party interference on oil and gas pipelines and protect sensitive data network communication cables.

The company has hundreds of installations across more than 60 countries. The group’s client list includes the US Department of Homeland Security, as well as the US Army and US Air Force. The Australian Department of Defence and the Adelaide Submarine Corporation are also clients.

On the infrastructure front, the company has a substantial presence in the protection of oil and gas pipelines and facilities. FFT’s clients in this field include Conoco Phillips, British Petroleum (BP), Exxon Mobil, Shell and Woodside Petroleum. 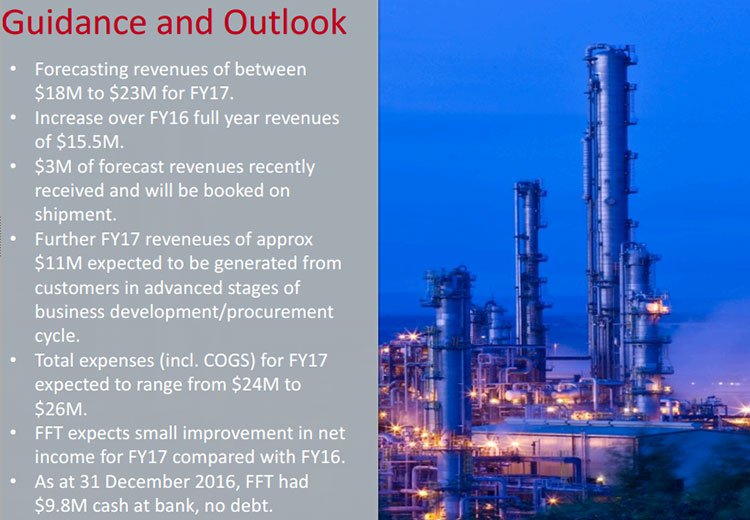 As well as providing security services to the Kennedy Space Centre, Lockheed Martin and the Federal Aviation Administration (FAA), the company also counts numerous international airports as its clients.

FFT has been awarded several important contracts in the last two months including one which involves two high security government sites located in North America.

The company continues to build its contract book in the oil and gas sector, having been awarded separate contracts in India and the Middle East in June.

FFT is also involved in telecommunications security, and last month the company was awarded a contract to provide security solutions and equipment for critical telco sites in South-East Asia.

One of the larger contracts awarded in recent months was for central alarm management systems at an international sea port located in the Middle East. This involved the application of the company’s proprietary Aura range of products some of which offer high-tech artificial intelligence to detect and locate skilled stealthy intruders climbing, cutting or lifting perimeter fencing with high sensitivity.

This has applications in a number of areas from power stations to intelligence agencies and nuclear facilities.

These clients use a range of professional products and services that include on-board recording equipment, fleet management systems, back-end mass storage and retrieval facilities and end to end managed services.

DTI designs, develops and installs its equipment. Management recently noted that it has a robust pipeline of opportunities and has experienced strong tendering activity over the past three months.

The company continues to develop innovative solutions with a particular focus on the transit industry which is benefiting from increased investment in public transit infrastructure.

Management reaffirmed revenue guidance only a fortnight ago, confirming that it expects to report fiscal 2017 income of circa $16 million.

What this revenue figure amounts to is yet to be determined so seek professional financial advice and consider all facts before making an investment decision.

DTI’s transit security systems received a strong endorsement in June as the company received a Letter of Intent from Gibela Consortium RF Pty Ltd for the supply of commuter communications systems for 576 new trains being delivered to the Passenger Rail Agency of South Africa (PRASA).

The $18 million Gibela project is the third major contract awarded to DTI under the Alstom Framework Agreement announced in September 2016. Alstom is a multinational player in the rail transport industry.

Contract execution is expected to occur in the third quarter of 2017 providing final negotiations, which include DTI establishing a presence in South Africa to support the project are successfully concluded.

Another key contract awarded in 2017 was for the supply of hearing-aid loop communications systems for a new build of 775 train cars for San Francisco’s Bay Area Rapid Transport Commission.

The proprietary communications system, designed and engineered by DTI, will deliver audio messages to disabled passengers via their hearing-aid loop, and assistive listening technology for individuals with reduced ranges of hearing.

Once again, the contract has been awarded by a multinational provider of rail equipment in Bombardier.

Focusing more on the security side of the company’s business it has provided surveillance systems for the London Underground and other parts of the UK rail network. Metropolitan police vehicles in South Africa have also been equipped with DTI’s CCTV surveillance systems.

DTI is active in the digital security surveillance field and has been successful in tendering for the supply and installation of up to 900 systems for police vehicles in South Africa.