The Australian dollar climbed 0.5% to 72c compared to its US counterpart after the Reserve Bank once again left interest rates on hold. Rates have remained unchanged for five consecutive RBA meetings.

Daniel Dubrovsky of Daily FX says, “Looking at the Central Bank’s monetary policy statement, the RBA judged that leaving the cash rate unchanged at 2% was appropriate at this meeting. Further information on economic and financial conditions will continue to adjust the committee’s outlook for effective policy. Most of what the bank said, remained unchanged, yet the Aussie rallied.”

Future market expectations hint to a further cut in interest rates in the next 12 months. However this is tempered by a lack of a clear cut change in rhetoric.

“This has resulted in the markets becoming less certain of a rate cut in the near future,” Dubrovsky said. “Indeed Australian two-year government bond yields rallied more than 1.4% in the aftermath of the announcement as the Aussie climbed.” 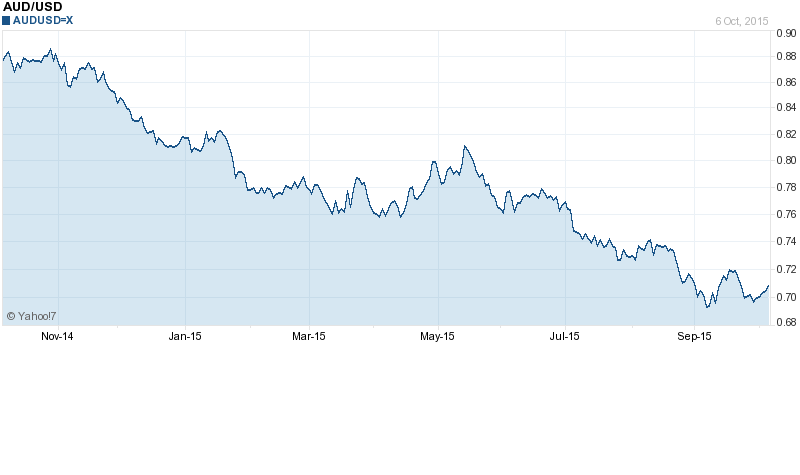 In keeping the rates unchanged, Glenn Stevens said, “The global economy is expanding at a moderate pace, with some further softening in conditions in China and east Asia of late, but stronger US growth. Key commodity prices are much lower than a year ago, in part reflecting increased supply, including from Australia. Australia’s terms of trade are falling.

“The Federal Reserve is expected to start increasing its policy rate over the period ahead, but some other major central banks are continuing to ease policy. Equity market volatility has continued, but the functioning of financial markets generally has not, to date, been impaired. Long-term borrowing rates for most sovereigns and creditworthy private borrowers remain remarkably low. Overall, global financial conditions remain very accommodative.

“In Australia, the available information suggests that moderate expansion in the economy continues. While growth has been somewhat below longer-term averages for some time, it has been accompanied with somewhat stronger growth of employment and a steady rate of unemployment over the past year. Overall, the economy is likely to be operating with a degree of spare capacity for some time yet, with domestic inflationary pressures contained. Inflation is thus forecast to remain consistent with the target over the next one to two years, even with a lower exchange rate. In such circumstances, monetary policy needs to be accommodative...

“Regulatory measures are helping to contain risks that may arise from the housing market. In other asset markets, prices for commercial property have been supported by lower long-term interest rates, while equity prices have moved lower and been more volatile recently, in parallel with developments in global markets. The Australian dollar is adjusting to the significant declines in key commodity prices.”

According to Swissquote market analyst Arnaud Masset, the tone of the statement was slightly less dovish then the market had anticipated.

“Despite expectations, there was no downgrade in the global growth assessment or additional discussion on uncertainty in China. The RBA maintains the general view that ‘the global economy is expanding at a moderate pace, with some further softening in conditions in China and East Asia of late, but stronger US growth’.”

However Massett feels that regional growth is losing momentum and could potentially have a deeper impact on Australia than the RBA recognises.