Carsales.com (ASX: CAR) released its full-year result for fiscal 2017 on Wednesday morning, exactly 12 months to the day since its 2016 result triggered a share price increase of 10%, taking it to an all-time high of $13.63.

Since then it has been somewhat of a rollercoaster ride for the operator of the largest online automotive, motorcycle and marine classifieds business in Australia. As tech stocks took a hit in the US towards the end of 2016, CAR’s share price plunged to less than $10.00.

Consequently, it will be interesting to see how today’s result is received. Firstly, let’s look at what the market was expecting. Analysts at Macquarie were forecasting a net profit of $115.1 million, representing earnings per share of 47.7 cents.

By contrast, CAR has substantially outperformed Macquarie’s expectations at the earnings line with a net profit of $119.1 million representing earnings per share of 49.4 cents.

Yet, it should be noted that broker projections and price targets are only estimates and may not be met.

This represents the fifth consecutive year of strong performances by the group as can be seen below. 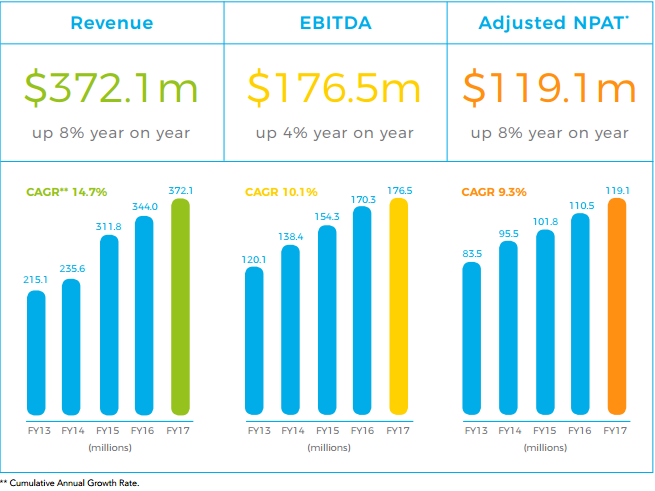 Key takeaways from a corporate, operational and outlook perspective

At the half-year mark, Managing Director, Greg Roebuck flagged a ‘solid uplift in revenue and earnings’ driven by the acquisition of DeMotores and the integration of core carsales IP into its Chilean and Mexican businesses.

While he noted that the economy in Brazil remained challenging, from an overall perspective the company made a positive start to the second half.

Commenting on its overseas operations today, CAR noted that it had continued to work well with partners in Brazil and South Korea, resulting in excellent growth in those markets as the management teams of both Webmotors and SK Encar continued to extend their market leading positions.

Not only does this confirm that the company has successfully addressed the challenges flagged after the first half, but from a corporate perspective it should also provide confidence that incoming Managing Director, Cameron McIntyre has successfully transitioned into the role, having taken over from co-founder and long serving MD, Greg Roebuck.

McIntyre provided a positive outlook statement from a qualitative and quantitative perspective in saying “Internationally, assuming market conditions remain stable, Korea is expected to see good local currency revenue and earnings growth and there are positive signs regarding macroeconomic conditions in Brazil”.

As can be seen below, revenues from the company’s overseas operations are playing an ever-increasing role in generating both gross and diversification within the business. 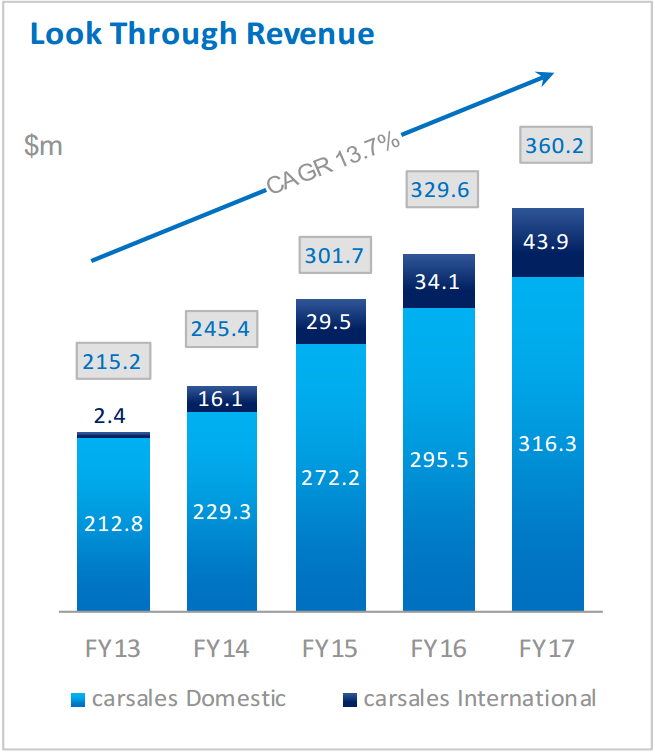 The group also continues to focus on the benefits from integrating its intellectual property with McIntyre saying, “We expect integration of core carsales IP and technology into our Chilean, Mexican and Argentinian businesses to continue, and this should provide an uplift in their revenue and earnings in FY18”.