With the ASX 200 up by about 1.5% on the first day of trading for 2021, it seems that investors are whetting their appetite for some strong gains in equities as the new year unfolds.

Investors have flocked to gold since the start of December with the precious metal increasing from about US$1780 per ounce to a high of more than US$1950 per ounce last night.

This trend has accelerated in the last two trading days as gold broke through the US$1900 per ounce mark on the last day of 2020.

A sustained break above US$1950 per ounce could attract the interest of technical investors as this has been the broad trading range since falling below the US$2000 per ounce mark in August.

The precious metal closed at an all-time high of US$2070 on 6 August 2020, so it is looking very attractive as it pushes up towards that level, suggesting the gold bulls could be out in force in 2021.

COVID-19 has undoubtedly fuelled gold’s rally towards the end of 2020, as the pandemic is showing no signs of ending, rather escalating in many countries globally.

While news of success on the vaccination front generated confidence early in the December quarter, investors have had a reality check as they have realised that we are hundreds of thousands of new cases and many deaths away from restoring some form of equilibrium.

As a sustained volatile climate is expected to continue impacting upon the market, gold is likely to be targeted as a reliable and traditional safe-haven investment.

At Finfeed, we cover a carefully curated stock portfolio, and whilst a third of our portfolio companies are focused on gold exploration, there are three we want to highlight as possessing promising share price catalysts as we enter the new year.

Tempus Resources (ASX:TMR), Los Cerros Limited (ASX:LCL) and Titan Minerals Limited (ASX:TTM) all have the capacity to build on the strong gains made in 2020 over the next 12 months.

Tempus Resources is dual-listed on the ASX and TSX and has experienced a 10% share price increase over the last week off the back of several promising announcements.

Its two major gold projects - Zamora in Ecuador and Blackdome-Elizabeth in Canada - offer investors a good balance of a high-risk/high reward asset against the certainty of the existing resource.

The company has made significant progress since starting its drilling campaign in the December half of 2020. In tandem, the group raised $4 million and its shares gained considerable momentum as exploration plans unfolded.

On Monday, management announced a Property Option/Joint Venture agreement with Robinhood Gold Corp (RGC) with respect to the company’s Mineral Creek Gold Project which was acquired in 2019 alongside its flagship Blackdome-Elizabeth Gold Project.

As a backdrop, Robinhood Gold Corp is a private company, registered in British Columbia, Canada in August 2020, a group that was formed to acquire gold projects.

RGC is currently an unlisted Canadian company, but may go public on the TSXV via an IPO or RTO, however there are no specific plans at this stage.

RGC has the potential to earn an initial 75% interest in the property, contingent on the group investing a minimum of C$2 million before the end of 2023.

Tempus announced in December that during 2000 metres of drilling at the group’s Blackdome-Elizabeth Gold Project visible gold over a two-metre interval had been observed.

A total of 12 diamond drill holes as shown below were completed. The remainder of the planned 6,000 metres of drilling will commence in the Canadian spring of 2021.

Whilst assay results are a potential share price driver in 2021, it’s likely that the Resource Update expected in March 2021 should trigger the most interest, suggesting now could be a useful entry point for investors.

This Resource Update will be a significant milestone for Tempus as it will allow peer comparisons to be made with other companies that have an established JORC 2012 resource.

Los Cerros (ASX:LCL) has laid out its biggest exploration drilling plan to date, that should see it hit several milestones in 2021, suggesting there are multiple share price catalysts on the horizon.

The company will be hard at work this year as it looks to uncover the true potential of Tesorito and Chuscal porphyry prospects, along with testing extensions to the advanced Miraflores Resource at the Quinchia Gold Project in Colombia.

Firstly, drilling at Tesorito should pave the way for a Maiden JORC Resource calculation in 2021.

LCL has been highly successful at Tesorito in terms of gaining an understanding of the geometry of the near surface, southern Tesorito gold-copper porphyry.

Results now include three holes of greater than 1g/t Au over 230 metres from surface, and drilling to date provides confidence in the southern and eastern potential limits of the mineralised zone of interest, with the body remaining open to the west, north and at depth. 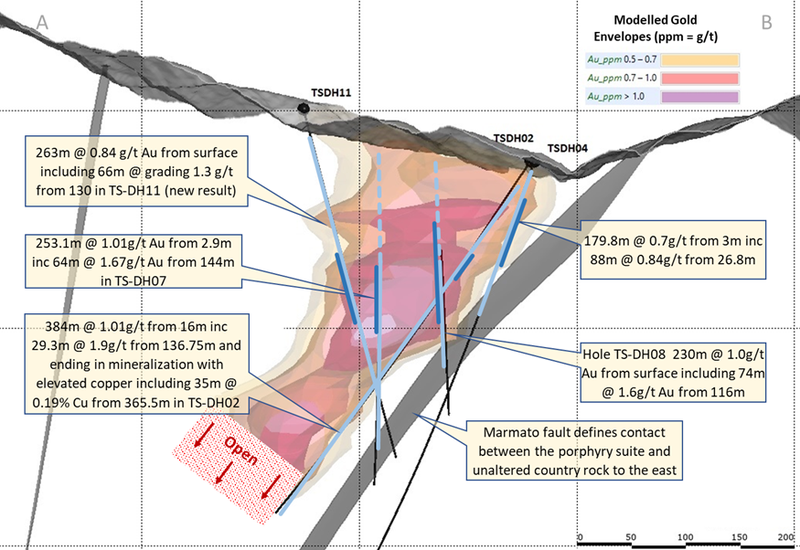 Other focus points for next year will include assay results for the last hole completed at Chuscal (CHDDH009), as well as exploration drilling that will test its identified gold-copper porphyry targets.

Results are due later in January with drilling already underway on the eastern porphyry target.

Further to this, in early-2021, LCL intends to allocate a rig to test for near-surface extensions to the established Miraflores Resource (877,000 ounces) and Reserve (457,000 ounces).

Management has committed to finalising remaining submissions for approvals for a potential mining development based on the Miraflores Reserve and DFS to retain the optionality of fast-tracking production.

Lastly, LCL plans to focus on surface work and ground geophysics at key epithermal and porphyry targets at its Andes Project.

During 2020, the Core Gold Inc acquisition was completed, and its assets have now been fully assessed.

Necessary management and resources have been identified and permits put in place to advance the main projects – Dynasty and Copper Duke.

Ecuador is becoming a highly regarded mining jurisdiction, being less explored compared with Peru and Columbia.

The country has a friendly Mining Ministry and stable mining laws, and with the elimination of the windfall tax along with unrestricted gold export regulations, Ecuador continues to attract major mining companies looking for world-class assets.

TTM has now completed the divestment of its non-core Peruvian assets and received US$1.65 million and shares in Western Pacific Resources Limited totalling approximately US$1.3 million.

In addition, Titan has entered into a binding agreement to sell its Vistra Gold Plant for nearly US$2.9 million, and the company has already received consideration of US$1 million.

The next six months will be pivotal as Titan begins important maiden drilling at Copper Duke where management is concentrating the program on trenching high-grade gold vein targets.

In addition, Titan is commencing delineation drilling at Dynasty which includes in-fill and extension drilling on the updated geological model which will underpin the studies.

Titan is trading at 12 cents after hitting a low of 3.8 cents in March 2020, elevating the company’s market capitalisation to approximately $130 million.

While this represents a doubling of the group’s share price since June, analysts see the scope for further upside with the consensus target currently sitting at 25 cents per share.