Brexit: its impact on Asia and EU

Matt Simpson of Think Forex takes a closer look at Brexit and the relationship between the UK and EU with regard to the UK trade balance, and potential impact on growth and direction for the British Pound surrounding the EU referendum. 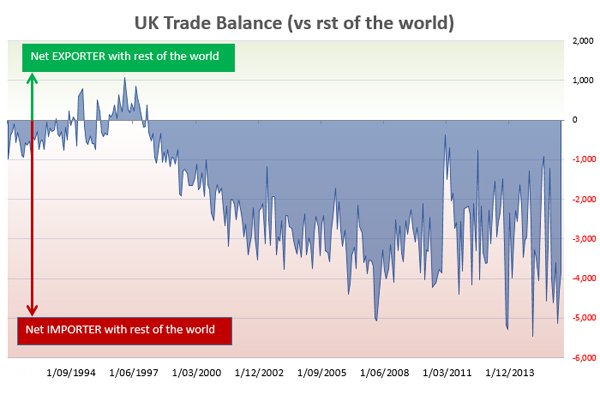 The UK has run a trade deficit since 1998, which simply means the economy imports more than it exports. A negative trade balance (referred to as a trade deficit) can hurt both economic growth and domestic currency.

Trade balance and growth
Gross domestic product (GDP) is a common way of assessing economic growth. The calculation of GDP effectively penalises imports by subtracting them from the total GDP figure. On the other hand, exports merit growth as they are included in the overall GDP number. This means that an economy with a trade deficit such as the UK would see lower growth than if it had a trade surplus (where exports outweigh imports).

The following diagram shows how both growth and currency are affected during the exchange of goods between two countries. In theory, if the volume and value of goods exchanged were the same then it would have no impact on growth or currency value for either country. 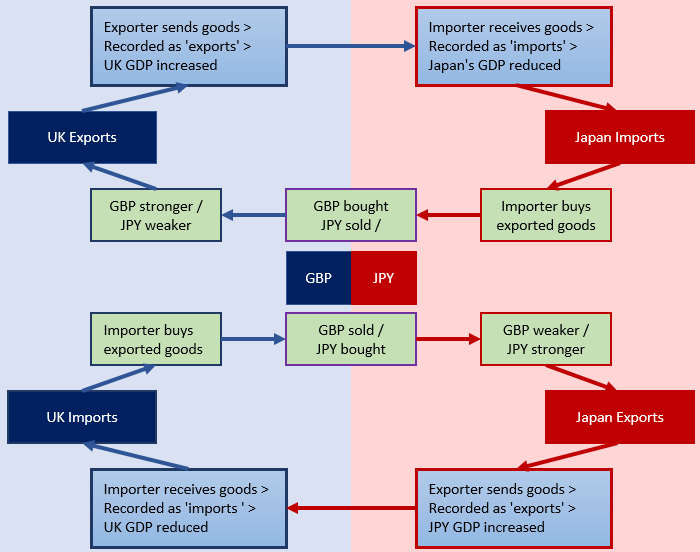 Of course, when you consider the sheer scale and complexity of international trade, alongside additional factors such as monetary policy, trade tariffs, trade deals and moving exchange rates (to name just a few) the reality is far more complex than the chart above can encapsulate. But it serves to demonstrate how the debit and credit of international trade can affect both growth and exchange rates.

Trade deals and exchange rates
Whilst trade balance (also referred to as balance of trade) looks at an economy’s trade vs the rest of the world, we can take a closer look at the trade balance against individual countries or regions. One of the great unknowns surrounding the ‘Brexit’ referendum is what will happen to trade deals if Britain votes to leave the EU. What we do know is that any significant change in trading partners could have a huge impact on growth and exchange rates.

Below we can see that the UK was a net importer with 9 of its top 11 trade partners and 8 of those 9 are EU members. Therefore, changes in trade deals resulting from an EU withdrawal could have a disproportionately large impact on domestic GDP and the British Pound. 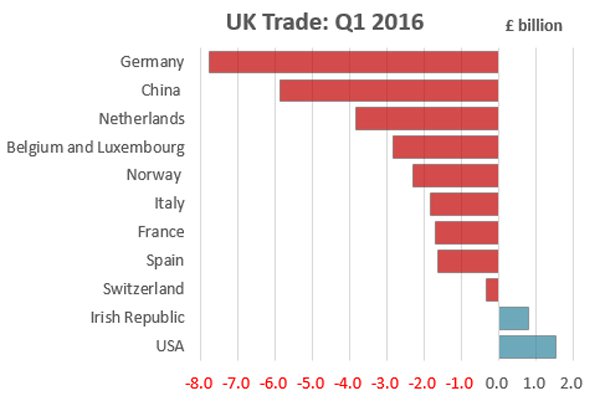 The tables below detail EU countries from the top 25 UK trading partners, for either exports (UK sends goods to) or imports (UK receives goods from). Focussing on Germany, the UK’s largest trading partner within the EU, we can see that imports outweigh exports by a factor of 2:1. So the UK has a trade deficit with Germany which negatively impacts UK growth, whilst helping to support German growth. If Germany still traded in the Deutschmark, this would have an appreciated effect on their currency. However, as they now trade in Euro’s the positive impact of German trade would be diluted with other Euro nations.

Not only does the UK run a trade deficit with each country, but there are also more countries which export to the UK than the UK exports to. By comparing the ‘total’ column of each table, you’ll see we have provided an ‘EU Trade Balance’ to show how the UK runs a deficit overall with the largest EU trade partners.

Taking Asia as an example, six of the UK’s top 25 importing trade partners are Asian (7 if we include Australia). Over the past year the UK has increased imports from Japan by 42.8% whilst exports to Japan have only risen 36.6%. In March 2016 alone, imports from Japan outstripped exports to Japan in nominal terms by a factor of 2:1, so trade balance between UK and Japan is in deficit. This places downwards pressure on the British Pound and helps support the Japanese Yen as the UK exchanges Sterling for Yen.

It is therefore no coincidence that GBPJPY has depreciated by -15.36% over the past year and by 10.7% in 2016. Of course, other factors will also be at play such as the interest rate differentials and whether the central banks involved are raising or lowering interest rates but hopefully you can appreciate the importance of trade data on domestic growth and currency. 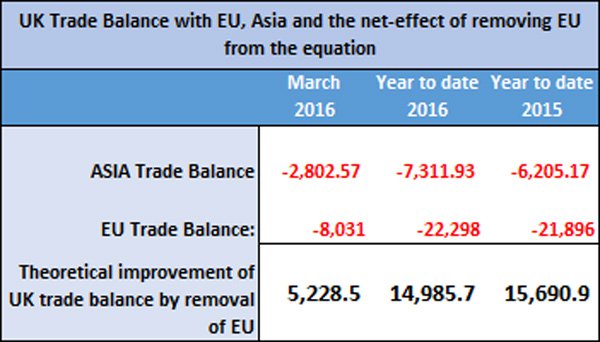 Brexit could result in higher growth for UK, without increasing exports
A great irony here is that, if the UK were to leave the EU and cut all ties with their EU trading partners, the UK should see a higher GDP as a result. This is because the negative effect of net imports would no longer weigh on UK GDP, thus sending their growth higher without having to export more goods.
We are not suggesting this outcome is likely, but want to use an extreme example to demonstrate how dramatic changes to trade deals can impact growth of the economies involved.

Whilst UK runs a trade deficit with Asia, removing EU from the equation would be a net positive for domestic growth as EU imports outstrip Asia exports by approximately 2 or 3:1, depending on which time horizon we choose above. However, for the UK to completely remove the negative effects from Asia imports, they would either need to become more productive at home (so less dependent on imports) or become a net exporter to Asia. However without the introduction of new Asia trade deals this seems very unlikely.

Tomorrow we will look at the aftermath of the referendum.