While the share prices of many gold stocks have been struggling, a smaller player in Breaker Resources (ASX: BRB) has had a stunning run in the last fortnight with its shares doubling from 21 cents to hit an intraday high of 43 cents last week.

Management took the decision yesterday to place the company in a trading halt pending the release of exploration drilling results.

While it would appear that promising news is imminent there could be multiple reasons for the share price spike. Simon Tonkin from Patersons Securities initiated formal coverage of the stock on September 8 with a speculative buy recommendation. In the ensuing week the company’s shares increased more than 50% from 25.5 cents to hit a high of 40 cents.

In his research note Tonkin said, “Breaker Resources has potentially made the next significant gold discovery in the Western Australian goldfields at its 100% owned Lake Roe project, located some 100 kilometres east of Kalgoorlie”. 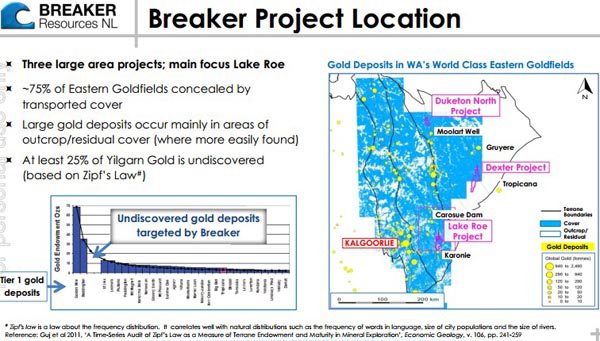 He noted that the mineralised zone was hidden under thin transported cover which has been overlooked by many previous explorers and that wide spaced drilling has intersected fresh sulphide hosted gold mineralisation at potentially economic grades at the Bombora and Bombora North discoveries.

Should the two discoveries be linked, thereby outlining a strike length of 2.2 kilometres Tonkin sees the potential for at least a 1 million ounce gold deposit.

This note emerged prior to the company announcing on September 13 that final assays had confirmed significant widths and high grades at Bombora North. These included large widths grading between 2 and 3 grams per tonne, including 10 metres grading 5 grams per tonne as demonstrated below. 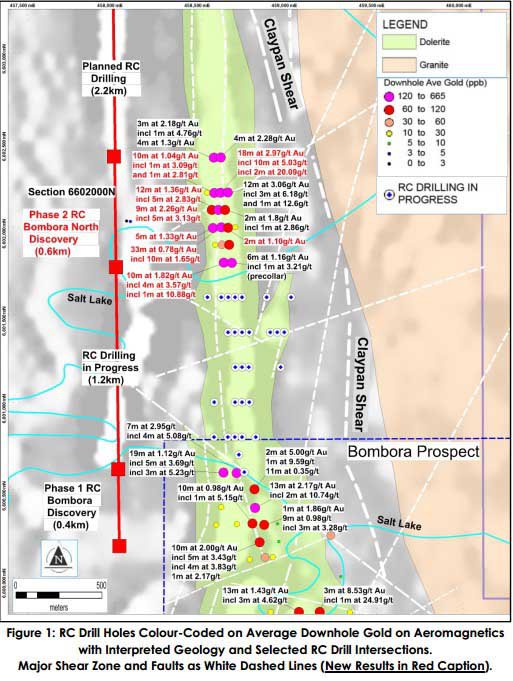 Further drilling is planned to test a 2.2 kilometres zone to the north of Bombora North where air core drilling has previously returned intersections up to 7.6 grams per tonne.

Management said the grade characteristics of the drill intersections highlighted strong potential for large tonnage open pit mining. Adding further flavour to the story is the fact that significant high grade gold intersections at both Bombora North and Bombora suggests the prospect of underground mining.

On this note, the sulphide lode style of mineralisation present often translates to substantial depth potential based on similar gold deposits in other parts of the Western Australian Eastern Goldfields.