The Big Pharma industry is set for a major shakeup as many blockbuster drugs begin to come off patent.

Some high revenue generating drugs will soon no longer be covered by their protective patents, meaning cheaper generic drugs can flood the market.

AstraZeneca’s blockbuster cholesterol drug Crestor was one of the most prescribed drugs in 2015 and generated US$6.4 billion in revenue. 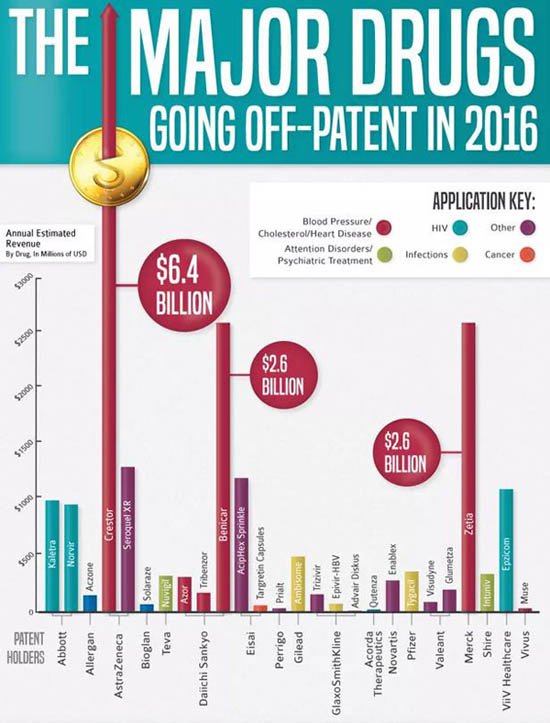 Revenues from Crestor are set to plummet 90%, with the FDA approving a cheaper generic version of the drug.

Typically being 30-80% cheaper, generic drugs can take up to 80-90% of the market share within their first year alone.

As a result, Big Pharmaceuticals will start to see their revenue streams dry up and will need to tap into new areas of the market.

“Blockbuster pharmaceuticals are on the verge of patent expirations while late-stage product pipelines are barren, thus shaking the foundations of an industry that was once the darling of Wall Street.” – Louis P. Berardi ,CFO EVP Corp. Development.

However, that’s easier said than done as the cost of bringing a drug to the market can be around US$2.5 billion, making research and development a costly exercise.

This opens a door of opportunity for the biotech industry who are typically more-lean and focused on early stage development, replacing Big Pharma’s need for costly R&D expenditure.

Historically big pharma has developed drugs to treat the symptoms of certain diseases, where biotech companies on the other hand, target the underlying disease itself.

With expensive R&D costs, combined with the patent cliff problem reducing revenues for Big Pharma, the trend has been towards mergers and acquisitions as a means of expanding business operations and product lines.

This has been evident over the past few decades, however has been an accelerating trend in recent years.

A PricewaterhouseCoopers report on the pharmaceutical industry predicted that 2016 would be ‘the year of merger mania’ and it appears that they were correct.

This year we saw the biggest deal ever in the pharmaceutical industry with Allergan and Pfizer merging in a deal valued at US$160 billion.

Whilst mergers between pharmaceuticals has been taking place for years, a more recent trend has emerged with Big Pharma moving into the biotech space to bolster its business model.

Big Pharma’s mergers and acquisitions of biotech companies in recent months include:

It should be noted that Biotech companies do not always need Big Pharma to make it to market and can make it on their own, as proven with Australia’s big three: CSL, ResMed and Cochlear.

Although working with a pharmaceutical company with established sales channels and large cash reserves can be beneficial in advancing a drug or technology to market.

On a side note, it is often overlooked due to Australia being known for its natural resources, however the nation has been ranked in the top 5 countries in biotech for the third year running.

Why the healthcare sector is going to remain hot

As life expectancy continues to increase along with the current 7.3 billion and growing global population, demands place on the healthcare industry are only going to increase.

Coupled with an aging population and the fact that half of all lifetime care expenditure occurs at 65 years of age upwards, the need for better healthcare solutions will persist. 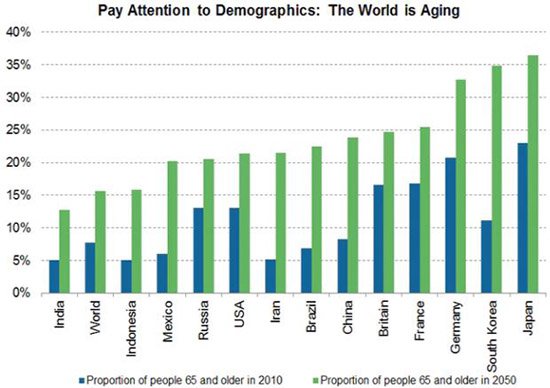 Another key driver in the healthcare sector is the increased rate of chronic illnesses, which has been described as the biggest health challenge facing Australia, according to the Australian Institute of Health and Welfare.

With Big Pharma falling off the patent cliff and an increase in demand for healthcare services across the globe, the biotech industry will increasingly become the focal point of the healthcare industry.