Bezos' split: Will Amazon get divorced, too?

When CEOs get divorced, particularly when there's no prenuptial agreement, there’s the possibility of a lot of wealth changing hands. When it’s a publicly listed company, you add the possibility that a founding CEO may lose their holding stake on the company, because their spouse can claim rights to up to 50% — or in same cases, more.

The bigger the company, the bigger the potential for major flow-on effects, which is why the recent announcement from Jeff and MacKenzie Bezos of their intention to divorce made the headlines. 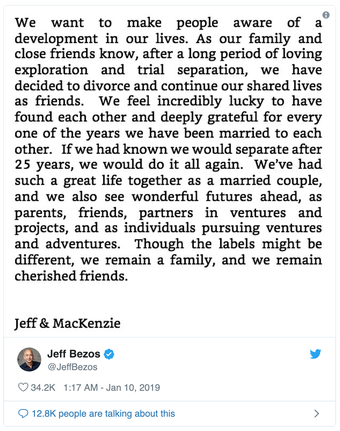 Jeff Bezos is currently the richest man alive, and the company he founded — Amazon.com Inc (NASDAQ: AMZN) — is worth US$829.39 billion. In fact, just days before the divorce announcement, the world learned that Amazon surpassed Microsoft to the become the most valuable public company in the world. Both had been in a tight race with Apple and Alphabet for the title.

The company’s share price has increased ~15% in the last month, so the news of the divorce doesn’t seem to be unsettling shareholders too much.

The question is, should it?

In 2013, Leland Stanford Junior University (an American private research university in California) adopted the term ‘separation anxiety’ to describe the impact of a CEO’s divorce on shareholder sentiment. The article uses past examples of CEOs of public companies going through a divorce and suggests that “shareholders should pay attention to matters involving the personal lives of CEOs and take this information into account when making investment decisions”.

It also identifies three potential risks. First, and most obviously, a loss of ownership or control over the company through a major reduction in the CEO’s stake and the uncertainty that surrounds it. A prenuptial agreement would eliminate this risk, yet in the case of Amazon, neither party has confirmed whether a prenuptial agreement exists, suggesting (some might say) that it does not.

Second, the stress of going through a divorce can pose a major distraction for a CEO who would ideally be focussed on running the large company.

And third, the article argues that it could impact on the CEOs own attitude towards risk. Why? Because CEOs are usually incentivised by compensation programs — in essence, watching their own wealth head northwards is usually a key motivator for most CEOs. If something happens that sees half their wealth taken away, it could (theoretically) influence how risk-averse they are in making future decisions.

In the case of Amazon, there’s a lot that’s unknown at this stage, but shareholders don’t seem too rattled — yet. One US West Coast-based attorney, Christopher Melcher, didn’t seem to think there was much to worry about, putting it this way: “Their divorce will be handled as quickly as an Amazon delivery”.

Beyond Bezos’ divorce, the company has had a few positive news stories in 2019 so far.

On January 11, just a few days after the divorce was announced, The Washington Post published a story stating that Amazon was planning to use its massive cloud computing service to launch into the streaming market for video game play. This would open the way for Amazon to become a major player in the gaming industry, where Microsoft and Google are already competing.

Amazon’s entry could see users able to play these games without having to buy the consoles, which is fairly big news in the world of gaming.

But it’s worth keeping in mind that Jeff Bezos actually owns The Washington Post, so the positive coverage for Amazon right around such a critical time may not simply be a coincidence.

And while the news is big, the fact remains that Microsoft is promoting its own similar service called xCloud which would allow users to play games on consoles, PCs, and mobile devices; and Alphabet's (NASDAQ: GOOGL) Google is reportedly working on its own video game streaming platform, too.

January 18 saw some other positive news coverage for Amazon. The mega company has been increasing its ocean shipping service, reportedly sending nearly 4.7 million cartons of consumers goods from China to the US over the past year.

Amazon offering companies with manufacturing bases in China the option of beginning-to-end shipping, would be a big advantage in what is reportedly a highly fragmented ocean freight market.

According to USA Today, CEO of Ocean Audit, Steve Ferreira said: “This makes [Amazon] the only e-commerce company that is able to do the whole transaction from end-to-end. Amazon now has a closed ecosystem.”

CEO divorce or no, there are plenty of indications that Amazon’s world domination is going to continue unabated.

That includes its relationship with the government; and some would argue, its support of government surveillance.

All in all, Amazon is somewhat of a moving feast at the moment — and you can be sure shareholders are watching closely.