Amazon CEO Jeff Bezos was the richest man in the world...for a day.

In fact it wasn’t even a day, it was a mere four hours.

When Forbes released its Richest Billionaires list on July 2017 this year, the man who seems to be taking over the world in just about every online retail sector, found himself at the top of the heap.

With a fortune of $90.6 billion, Bezos became the first person to ever top a net worth of $90 billion.

Yet, such are market dynamics, by the end of the day Amazon had retraced and Microsoft founder Bill Gates was once again named king of the billionaires hanging in there with $86 billion, almost $11 billion ahead of Warren Buffet and $13.2 billion ahead of Bezos who fell back to a measly $72.8 billion.

This quick video, briefly explains why Bezos held the mantle albeit ever so briefly.

Bezos has been a billionaire for more than 20 years, yet his wealth has surged in the last two years mirroring the recent surge in Amazon stock.

Predictions are that Bezos will soon surpass Gates.

According to leading US equity analyst James Camark, if Amazon completes its deal with Whole Foods, it could come close to doubling its stock. Completion depends on whether the Amazon-Whole Foods deal is deemed to violate anti-trust laws.

“Honestly, this could be the first trillion-dollar company. I mean there is very low risk for the FTC to not approve this deal. But if they do rubber-stamp it as a yes, I think there’s very little to stop this from becoming a $2,000 stock,” Camark said on CNBC’s Squawk Box.

With Amazon looking to purchase a meal kit business in the US and move into Australia in a meaningful way, having now purchased warehouse space, there is every chance that Bezos will be number one on the list next year.

There was an all-time high of 2043 people on Forbes’ World’s Billionaires list this year and there are more billionaires than ever before worth a total of $7.7 trillion.

A recent report conducted by WealthX shows the breakdown. 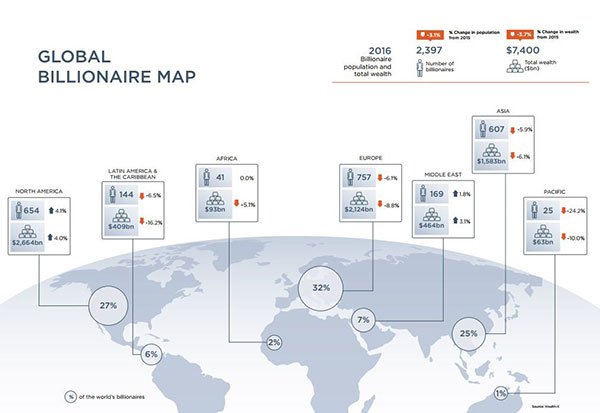 Also of note, was that finance is still the most common industry to build a billion-dollar fortune, Asia is the fastest-growing region for the ultra-rich and the number of billionaires grew by 15.2% to 645 and their net worth climbed 19.6% to $1.69 trillion.

With that kind of growth, there’s hope for us yet, it would seem.