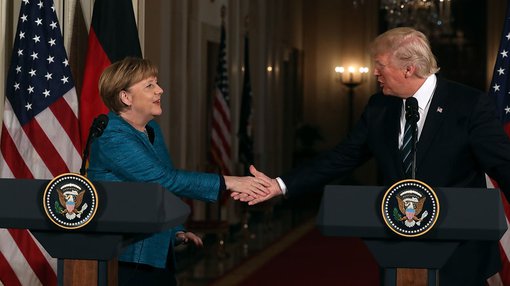 US markets closed the week on a slightly negative note, but all the action had already been absorbed with the Fed Reserve having made its rates decision. The meeting between President Donald Trump and German Chancellor Angela Merkel was a non-event in terms of financial markets.

Despite a mid-afternoon rally, the Dow finished in negative territory at 20,914 points, a fall of 0.1%. There was weakness amongst the financials with Goldman Sachs and JP Morgan falling more than 1%.

The NASDAQ marked time as it finished at 5901 points compared with the previous day’s close of 5900 points.

However, this week’s G20 meeting of finance ministers and central bankers from the world’s largest economies which is being held in Germany could well be the catalyst for significant market moves. One of the key issues on the table will be the US’s stance on trade.

Ahead of this meeting there were only nominal upward movements in the DAX and the Paris CAC 40 as they gained 0.1% and 0.3% respectively.

Two of the more volatile commodities of the week, oil and gold were fairly static on Friday.

Oil finished the week just below US$49 per barrel and gold was nudging US$1230 per ounce after hitting US$1232 per ounce in mid-morning trading.

Base metals ended the week strongly with zinc and lead leading the way, both gaining more than 2%.

Zinc finished within a touch of its long-term high of just over US$1.30 per pound. Lead traded above US$1.03 per pound for the first time in March.

Nickel and copper were both up approximately 0.5%.

The Australian dollar is fetching US$0.77, having held on to most of the gains made post the Fed Reserve’s rate decision.