Australia’s second quarter gross domestic product results have been released showing that the economy grew by 3.3%, making it the strongest growth experienced since the June quarter in 2012.

This is now the 100th quarter that Australia has gone without technically experiencing a recession, closing in on the Netherlands’ record of 103 quarters of expansion.

A recession for those wondering is when you have two consecutive quarters of negative economic growth.

As can be seen on the ‘run rate’ chart of Australia’s GDP we have fared well over recent years, including during the 2008 GFC: 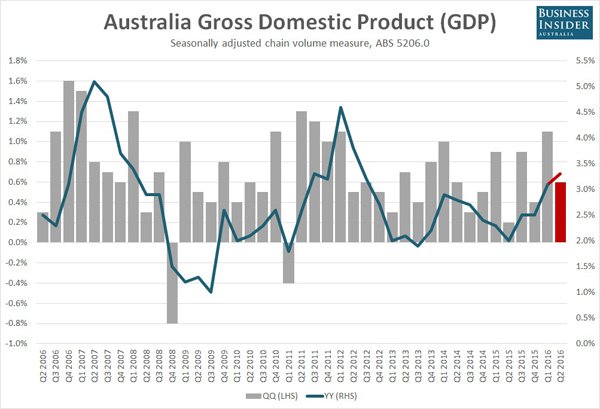 Household consumption expenditure being the main component making up the GDP figure grew by 0.4% for the quarter and 2.9% for the year.

Government expenditure was the other driver jumping 1.9% over the same period.

The Australian Bureau of Statistics noted that government investment increased 15.5%, largely driven by state and local government up 21%. This reflected an increased transfer of assets from the private sector which contributed to a 3.4% drop in private investment.

The rise in housing renovations outgrew the construction of new dwellings: the unwinding of the mining boom seeing non-dwelling construction detract 0.8ppts from the overall GDP figure. Western Australia, the mining mecca of Australia saw GDP drop off 2.6% as a result.

With the national economy as a whole coasting along we may see Australia break the record of the longest standing economy not to experience a recession. Quite a feat if achieved.

However others are saying that a nationwide recession is inevitable and that even our banks may be in trouble.

Time will tell if Australia is able to go a record breaking 104 quarters without a recession.

I guess we’ll take some advice from our sporting heroes and take it ‘one over at a time’.