Why Australia can’t avoid a recession

On the 28th July 2016, Professor of Economics at Kingston University, Steve Keen, gave a presentation on the outlook of the Australian economy at The Royal Society of Victoria located in Melbourne.

The British-based economist and author of the popular Debunking Economics book considers himself to be a post-Keynesian and is highly critical neoclassical views on economics.

Keen is widely known for his views on the Australian property market and is one of the few voices speaking out against the absurd levels of debt driving housing prices higher.

Despite the next generations of Australians being priced out of owning a home, the Australian government and Reserve Bank of Australia pride their success on continued appreciation of the property market, believing it to be a wealth effect.

With private debt in Australian now 60% higher than that in the US, combined with the end of the commodity boom that was fuelled by the China growth story, the land down under has entered uncharted waters.

The government and RBA will face an uphill battle to maintain property prices from here on in as credit demand continues to fall.

At present 85% of new debt finances asset purchases in Australia, with 51% of that going into the property market.

According to Keen, Australia borrowed its way out of a recession in 2008 and delayed the day of reckoning, rather than solve the issues.

Keen sees a 40% drop coming in the Australian property market over the next decade, who he himself is waiting for before looking to buy property in Sydney and London.

This would be welcome news to the younger generation of Australians currently priced out of the market, largely due to speculative buying and overseas demand.

Keen sees Melbourne and then Sydney as the most oversupplied markets in Australia for both housing and units.

Keen’s analysis of private debt has led him to identify seven countries he believes will be most likely to suffer a debt crisis in the next 1-3 years.

Here’s why Keen is predicting an upcoming debt crisis...

America’s 2008 crisis began when the rate of growth of credit began to fall, this is the same scenario that played out in Japan before they had their lost generation of multi-decade recessions beginning 18 years ago.

Keen’s research shows that Australia, along with the seven other countries are headed down the exact same path.

Even Barclays research shows that Australian households are the most indebted in the world, aiding Keen’s views that the private debt to GDP ratio is reaching alarming rates that are set to drop, sending us into a deep recession. 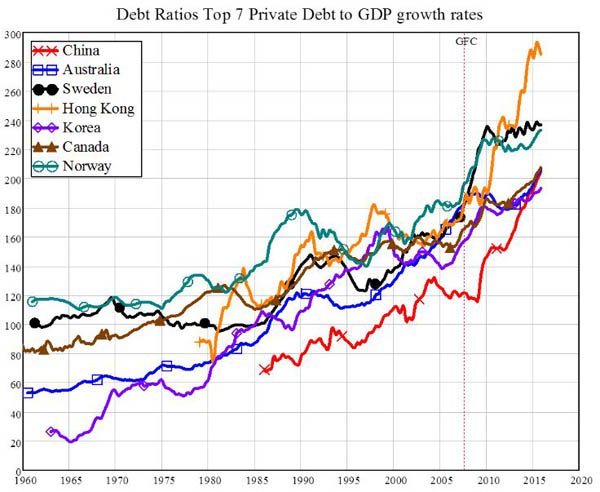 Unsustainable debt is going to eventually lead to a major correction in the markets, when the crisis finally hits it’s going to hit hard according to Keen.

When will the crash happen?

Accurate timing of when these events will occur can be difficult as many influencing factors come into play.

Along with policies being enacted that once seemed out of the question, like the negative interest rate policy now being adopted by many of the central banks around the world, the Swiss central bank at -0.75% as one example.

Keen believes the RBA will tread a similar path with the current cash rate at a historically low 1.75%, doing all it can to keep the housing bubble inflated by cutting rates in the coming months.

Where Steve Keen gets it wrong

When asked for solutions, Keen believes private sector debt needs to be reduced.

This is correct, as there is far too much cheap credit in the market fuelled by record low interest rates, which in turn fuels speculation that we saw prior to the 2008 crash.

However there is an opposing view.

Firstly Keen believes we have a free market economy, but several economist believe this could not be further from the truth. In a true free market the banks would have been allowed to fail in 2008 restoring sanity to the markets and seeing those who speculated be punished, however the government and central banks stepped in and have only expanded the debt bomb to levels never before seen.

This is interventionist economics at its finest, which is exactly what Keen promotes yet fails to see.

In a true free market as proposed by Australian School of economics, the market is allowed to go through its natural cycles the same way the weather goes through seasons. Meaning downturns are a natural part of the business cycle that does not require interfering.

Keen accuses the government’s goal of attaining a budget surplus as the problem saying that it should be spending to keep the economy fuelled. So whilst Keen labels himself as being post-Keynesian, he is actually promoting expansionist Keynesian philosophy.

The helicopter money solution proposed by Keen will simply transfer the debt from the private sector to the public sector. Who is then left to foot the government’s bill? Tax payers.

Keen argues that the government could just print the money, once again this devalues the currency and harms the middle to lower class, particularly savers. Something Keen fails to acknowledge.

Federal spending does little to boost the actual fundamentals of an economy in any efficient manner.

The United States government for example has expanded its national debt from $8b to $20b under the eight years of Obama. Can anyone honestly say that the US economy and middle calls is better off as a result of all that US government spending?

Their economy is so fragile that the both the World Bank and IMF have publicly warned the Federal Reserve not to raise rates as it any substantial rate rise would send the economy in a tailspin.

So much for government spending being a solution, the $12 trillion of debt added will do doubt be left for the next generation of Americans to pay.

Furthermore, Keen believes some bonds are good assets to hold as the government can’t go insolvent as it can print currency. What Keen fails to understand is that doing so diminishes the value of the currency.

When quizzed on whether he saw value in gold and silver, historically seen as a safe haven in times of political and economic turmoil and as honest money, Keen said they were ‘speculative’.

This is despite gold and silver being the best performing assets of 2016.

Although Keen did acknowledge they do well in times of financial and political crisis, he fails to even mention them in any of his talks and models.

Following his two hour talk about how the world is on the verge of a financial and political crisis, Keen’s failure to mention gold and silver begs the question as to whether he considers the bigger picture.

How can an economist that spends most his time talking about central banks fail to mention gold?

Does he believe gold is held due to ‘tradition’ as former Federal Reserve Chairman and economic bubble blower Ben Bernanke believed when asked by Congressman Ron Paul if gold is money and why central banks hold the precious metal in their vaults?

If it is ‘speculative’ then why do central banks hold so much gold and why are the future superpowers Chinese and Russian central banks in particular buying physical gold hand over fist?

Why is the German central bank demanding the US return its gold reserves?

It seems Keen has failed to consider that gold is money and unlike fiat currencies it cannot be printed out of thin air by a government or central bank losing control of the economy.

Not to mention gold is currently at all-time highs in AUD.

Other solutions offered by Keen are for Australia to diversify itself into other sectors, especially now that the commodity boom is over. Saying that new industries need to take root for entrepreneurial growth to sprout from and drive innovation.

This would be a wise move for Australia to make no doubt.

So as much as Keen’s analysis shows that Australia is facing a housing bubble may be correct, the solutions proposed by Keen are somewhat temporary, do not offer a long term solution and involve government intervention.

Without offering advice for investors on where they can profit from the upcoming crisis it begs the question as to whether the left-brained Professor actually understands the underlying problem and the solutions necessary to fix them long term.

For the most part, whether you agree with Keen or not, his seemingly contrarian views to the mainstream and criticism of central banks is refreshing and much needed debate in Australia.

For those wishing to further delve into Keen’s views further they can visit his website: debtdeflation.com.