Aussie wineries in a sweet spot

October was a bumper month for news on the global wine industry with promising developments emerging from some regions while other high profile production areas faced devastation.

Fires that have decimated much of Northern California will have a profound impact on the state’s US$58 billion wine industry, with destruction so widespread that it is still difficult to ascertain the impact on supply.

What we do know, however, is that fire-affected vineyards could be impacted by up to four years. Even a large proportion of those that escaped fire damage are likely to have lost a whole vintage due to smoked taint which can be so severe that it affects subsequent vintages.

Arguably the premier wine producing district in the US, Napa Valley has been severely affected. More than 1000 wineries are situated in Napa Valley and the nearby Sonoma region. This area reportedly accounts for approximately 85 per cent of US production, including most of the premium wine.

While this is devastating for the Napa Valley, the effects on supply will obviously have an impact on demand from other winery regions — including Australian labels.

Our industry already has a prominent position in the US with ASX-listed Treasury Wine Estates (ASX:TWE) not only exporting large volumes of Australian wine to that region, but also involved in production from its own US-based vineyards. The group’s sizeable operations in Australia and the US are highlighted below. 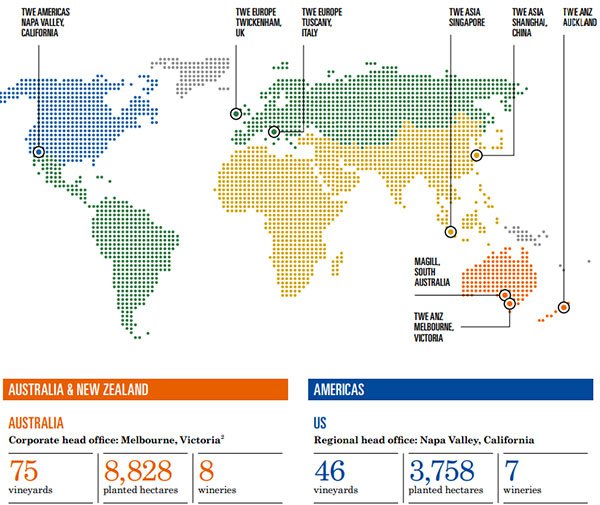 TWE confirmed at its recent AGM that its operations haven’t been affected by the fires. While shareholders breathed a sigh of relief, there was also cause for celebration as the company unveiled the Penfolds g3 in Hong Kong, home to some of the world’s wealthiest wine collectors.

This wasn’t just the release of another vintage, but a whole new concept. The g3 will be a blend of three famous Grange vintages, 2008, 2012 and 2014 — with a $3000 price tag for one of these gems. Spill one of those and the stain on the carpet will be the least of your worries!

The report indicates that exports to greater China totalled $853 million, well above our next largest export market in the US which brought in $461 million. Total wine exports grew 13 per cent overall to $2.4 billion.

While this augurs well for our wine producers, it may also suggest that Australian wine drinkers should stock up their cellars. In the last decade the prices of Australian meats and seafood have risen substantially, largely due to the significant increase in demand from overseas markets such as the US, Japan and China.

With the added impact of a shortfall of wine supply coming out of the US, it is likely that Australian wine producers will be able to fetch substantially higher prices from overseas markets, which generally drives up the price of wine at retail outlets and restaurants in Australia.

Where to go for value?

With few ASX-listed players in the wine space, equity investors looking for exposure have very little to choose from. TWE is undoubtedly the big player with a market capitalisation of approximately $11 billion.

It was only on Monday that the company’s shares hit a record all-time high of $15.23, representing a substantial increase of circa 20 per cent since the start of August when they were trading below $13.00.

The following chart shows the strong outperformance of TWE against the S&P/ASX 200 Consumer Discretionary Index (XDJ) over the last 12 months. In particular, note the clear breakout since August. 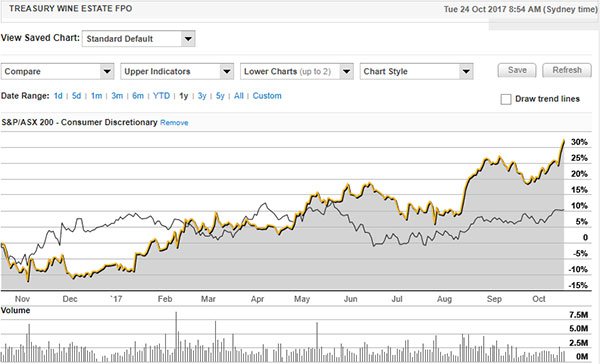 Analysts at Citi ran the ruler across TWE in September, placing a sell recommendation on the stock with a price target of $10.90. Clearly, they see it as well over-priced at current levels.

However broker projections and price targets are only estimates and may not be met.

The company even looks expensive based on forward earnings per share estimates, trading on a PE multiple of 32 relative to consensus forecasts for fiscal 2018.

At the other end of the scale, Australian Vintage (ASX:AVG) is a mere minnow compared with TWE with a market cap of approximately $120 million.

However, it punches above its weight in export markets led by household brands such as McGuigan Wines, Nepenthe and Tempus Two.

Australasia and North America accounted for approximately $100 million in AVG’s sales in fiscal 2017, while the UK and Europe contributed $88.5 million. This area of the company’s operations was negatively impacted by the sharp depreciation in the British pound, a factor that shouldn’t have the same impact in fiscal 2018.

From an export perspective, the early signs are encouraging with AVG’s sales to Asia at this stage in the first half of fiscal 2018 up 60 per cent on the previous corresponding period. Consequently, the next 12 months could be one of transforßmation for the group, laying the foundation for significant expansion over a two-year timeframe.

Management isn’t being too bullish with its forecasts, pointing to 10 per cent profit growth in fiscal 2018 which would place the company on a PE ratio of approximately 20 relative to this year’s guidance — well below TWE’s heady multiple.