Let’s not beat around the bush. Initial Public Offerings, otherwise known as IPOs, have been off the boil this year.

In fact, the listing landscape has been brutal across the board.

According to research conducted by EverBlu Capital, many investors are nursing double digit losses, with the average loss coming in around 31.5% and the median loss holding firm at 17.9%.

There have been 86 IPOs (or RTOs) this year and only 19 of the 86 show positive returns; 65 show negative returns; and two are flat.

Further, a total of A$8.053 billion was raised and the loss so far on the amount raised is $1.324 billion. The two largest listings — Coronado Global and Viva Energy are down 25% and 24% respectively.

The report, prepared by EverBlu’s Russell Wright, gives a comprehensive list of IPOs in 2018. Here’s a quick look at the top and bottom five performers. 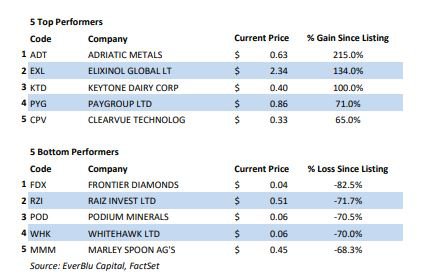 You can view the full report here.

A couple of reasons IPOs have failed this year

When it comes to successful listings, a comparison between 2017 and 2018 is stark.

2017 was actually a bumper year and according to Deloitte, there were 57 listings just in the six months to June — compared with 40 in the same period this year.

According to the annual On market Report released in February this year, small-cap listings powered IPOs in Australia to a 61.6% average return in 2017.

Business Insider Australia gave us this gem of an infographic highlighting 2017's IPOs by sector. 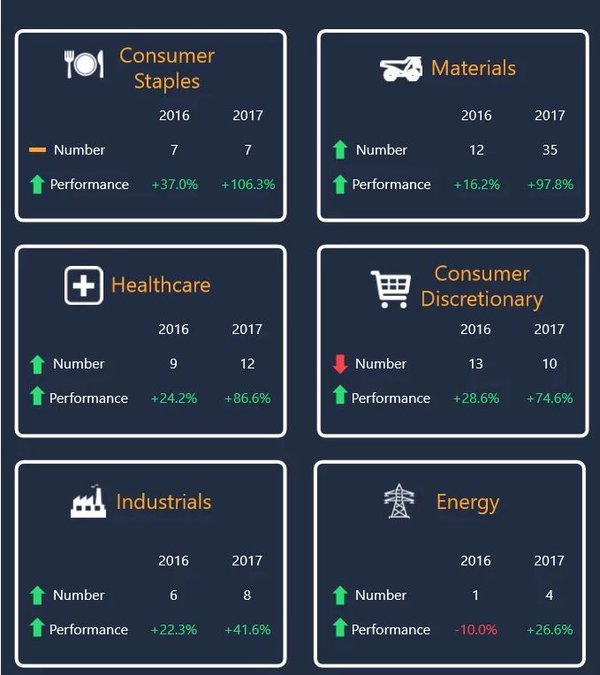 Clearly, all was pretty rosy last year. So what happened in 2018?

One issue is poor communication: a failure to communicate the message to investors and help them understand the company’s position and its objectives.

It is as Ben Heap founding partner of venture capital firm H2 Ventures told CRN: “IPO’ing means, as a high-growth business, you have a significant communications challenge to ensure that the investors understand where the company is at and what its objectives are and how they’re trying to deliver.

"I think that companies that list too early face the challenge of a misalignment of expectations that private companies don’t have to deal with,” Heap says.

A broader look at the ASX from a macro level

The China-US trade war has also had a major ripple effect on international business, which has trickled down to Australian companies who have listed or were/are looking to do so.

Ringo Choi, the Asia Pacific IPO Leader of Ernst & Young said, "For the short term, I think it (the trade war) will affect the market and that will consequently affect the IPO."

At the time the trade war began, not only did the Australian dollar fall but according to the Australian Financial Review: “Tensions spooked investors. The local S&P/ASX 200 index fell 23.5 points, or 0.4%, to 6161.5, following Wall Street's weak market close as anticipation of the tariffs rose in late trading.”

Suffice to say, it’s been a tough market ever since. However, according to the same publication: 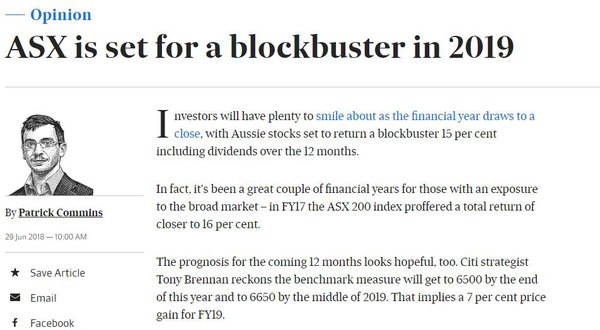 Given the fluctuations we have seen in 2018, it is difficult to determine what will happen to aspiring IPO'ers in the next 12 months.

Assuming global tensions settle, private companies don’t list before they’re ready — and they communicate their proposition to the market effectively — we are unlikely to see the degree of failure in 2019.

Yet, as with all things, only time will tell.