The figures may indicate that small cap stocks have taken off, but it could simply be because the weakest members of the herd have been wiped out.

For the calendar year to date, the Emerging Companies index (ASX:XEC) has grown by 6.25% while the Small Ordinaries (ASX:XSO) Index has grown by 0.56%.

This has been especially pronounced since August, when the divergence between the big boys and the small gathered pace. 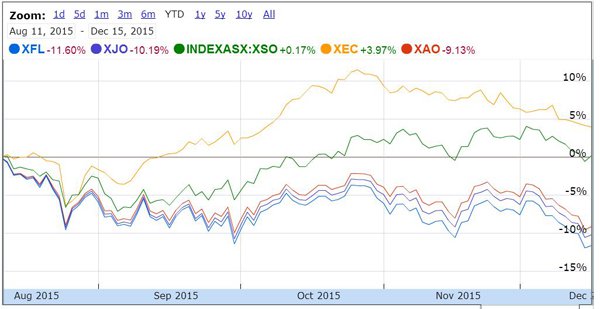 So what the hell is going on? Why has this year been the year small caps have started to perform?

“I think what’s happening is that small caps went through a period of retraction by the resources downturn already and that’s really started to catch up in the broader market this year,” David Paradice of Paradice Investment Management told Finfeed.com.

So it’s not really that small caps have gone really well, it’s that the likes of your BHPs have been hurt this year by continued softness in commodities and small caps already went through that.”

The commodity pain has been an ongoing feature for the year, with BHP shedding almost half its value this year (at the time of writing) while RIO has gone down by over 27%.

Both of these stocks are (or were) heavily weighted in the likes of the All Ordinaries and other broader market indices, simply because they had huge market caps.

So when they, along with other resources-exposed stocks, went down, the whole index was dragged down with it.

But the reason the small cap indices weren’t affected as much by the resources winds blowing through the market this year, Paradice says, is simply because the pain caused a lot of the companies to go bust altogether.

“Effectively what is happening at the moment is the Darwinian theory or survival of fittest. For ten years resources companies were basically having a party and we’re now seeing the hangover from that,” Paradice said.

“The commodity price support really masked a lot of bad companies and they’ve gone by the wayside.”

At the peak of the resources boom, Paradice estimated that resources companies made up about 45% of all small cap companies, and that doesn’t account for the plethora of mining services companies in the mix as well.

This was a huge exposure, so when commodity prices headed south a lot of companies simply went bust and were taken off the index list – effectively making the index look a better performing index than it may have been if these companies scrimped and saved to stay alive.

“We excluded resources from day one as we don’t see we have an advantage in forecasting commodity prices,” he said.

However, this hasn’t made the fund shy away from investing in cyclical plays.

“We do invest in cyclicals, as long as the potential return far outweighs the risk.”

One such cyclical play is the rise of the tourism industry, one of three picks for the year ahead from Pengana along with the aged care and telecommunications sectors. 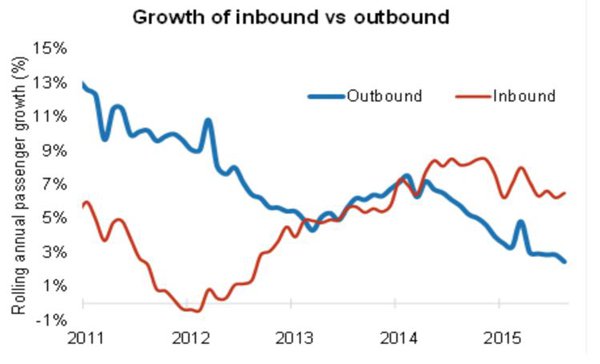 Chart from the Australian Bureau of Statistics showing the changing of the guard in tourism.

He pointed to Australian Bureau of Statistics stats which clearly captured the trend, almost as a proxy to the Australian dollar.

However, the macro picture is only part of the equation for both Prendergast and Paradice, with both saying the management of a potential investment had a huge role to play in choosing whether or not to invest.

“That’s where 90 per cent of our focus is,” Prendergast said. “Successful small caps are predominantly driven by key individuals, much more so than large caps.”