The biggest retail growth market is… Diapers. For adults.

Adult diapers are expected to become a multi-billion dollar market over the coming five years, overtaking sales of diapers for babies.

In what may seem like an April fool moment, diaper manufacturers are seemingly turning to the adult population for future sales growth.

That’s according to a market research report published by Euromonitor, a global research agency of retail consumer markets.

Euromonitor International forecasts a 48% increase in adult diaper sales, to US$2.7 billion in 2020 from US$1.8 billion last year. That compares with expected growth of 2.6%, to US$6.3 billion, during the same period for baby diapers.

But that’s not all, Euromonitor says “the adult-diaper market is outpacing that of every other paper-based household staple in the US”.

Adult diapers are shaping up to become the catalyst for the next wave of US consumer spending prowess. 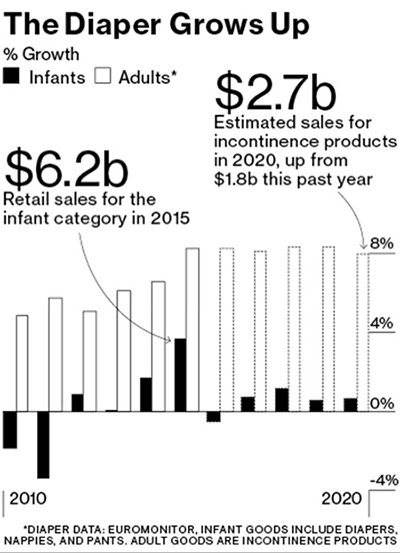 Looking deeper, it would seem there are two factors responsible for the surge in adult diaper consumption.

First, there is the demographic factor.

The world’s population is ageing with some countries seeing grey faster than others. Merely three years ago, Euromonitor predicted that sales of adult diapers were set to overtake sales of baby nappies in Japan by 2014.

In Japan, which is home to the fastest aging society globally, citizens aged 65 and older account for 25.1% of the overall population, up from 17.4% in 2000. This is more than double that of South Korea and China whose elderly populations currently stand at 12.2% and 11.1% respectively.

Sales of adult diapers in Japan are projected to rise 25% between 2012 and 2017, according to Euromonitor.

As birth rates slow down while longevity continues to lengthen, adult diaper manufacturers are eyeing up a market with strong expansion potential. One of the best aspects is that while babies eventually become old enough to not need diapers, incontinent elderly consumers tend to need them indefinitely.

Maybe that could explain the second factor behind the surge in adult diaper consumption.

If aging demographics raises diaper demand for health reasons, the second factor behind the boost in adult diapers seems to be rather psychological in nature.

Expensive marketing campaigns by multinational powerhouse brands such as Kimberly-Clark and Procter & Gamble has succeeded in making adult diapers hip and cool amongst adults.

Instead of being seen as a way of preventing incontinence, marketing campaigns are promoting adult diapers as a lifestyle choice aimed at comfort and convenience.

“We’re trying to make the product more normal, and even fun, with real people in our ads saying, ‘Hey, I have bladder leakage, and it’s no big deal” says Jay Gottleib, President of Adult and Feminine Care Sector at Kimberly-Clark. 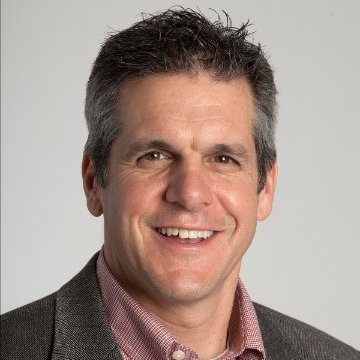 Kimberly-Clark is currently the dominant diaper manufacturer globally, accounting for 56% of global sales last year. Coming in second is Procter and Gamble with 9%, and then Sweden’s Svenska Cellulosa at 7% in third.

As part of its marketing campaign for its ‘Depend’ brand, Kimberly-Clark produced a sales conjuring rap video with its employees promoting adult diapers – less for health reasons but more so because of style and fashion.

Gallivanting around office cubicles, loitering around the water cooler and marauding around the company’s warehouse can be done in diapers that provide comfort, convenience and style, according to Kimberly-Clarks’ YouTube video that almost went viral in 2014. 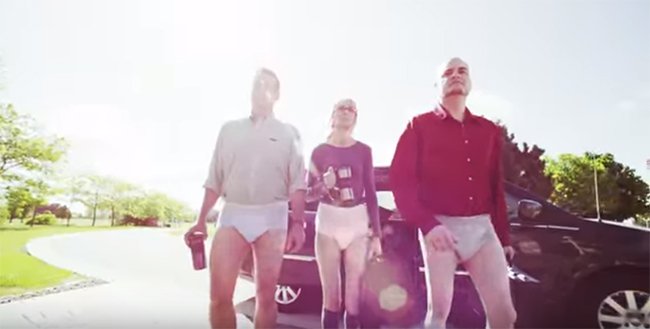 According to Marlene Morris Towns, a teaching professor of marketing at Georgetown University, “They’re driving home the point that attractive people in their 40s and 50s or even younger, not just nursing-home residents, can be wearing this under their clothing”.

So there you have it; if you were wondering which retail sector has the most commercial blue-sky potential over the coming few years, adult diapers may just be it.