John Welborn, Chief Executive of ASX 200 gold producer Resolute Mining (ASX: RSG), attended the Noosa Mining Conference last Friday and took the time to update FinFeed on the group’s multiple projects that should see it progress to a 500,000oz/annum producer by 2020.

The company has strung together three stellar years between 2015 and 2017 inclusive, exceeding guidance and analysts’ expectations each year on every count, from production through to costs and the realised price per ounce of gold.

The realised gold price was $1,717 per ounce, significantly better than spot of $1,661 per ounce. However, even at spot it is worth noting the healthy margin of circa $530 per ounce.

RSG benefits from Welborn’s business acumen and knowledge of Africa

Welborn has demonstrated his strong financial background and knowledge of the industry and its drivers in effectively managing the company’s exposure to commodity and currency price movements. His experience stems from many years in the industry from exploration through to construction and production.

Most will remember Papillion Resources’ transition from a mere minnow to the owner of the Fekola gold project in West Africa, which was eventually taken over by B2Gold for $670 million. Welborn was instrumental in identifying Fekola as a highly prospective deposit. Interestingly, he now has a ‘soundalike’ exploration target in Nafolo which is situated adjacent to the Syama mine, recently delivering some outstanding drill results.

However, despite the fact that he has established such a strong track record, and RSG has consistently outperformed, it doesn’t appear to be reflected in the share price. Trent Allen from Citi reviewed the company in mid-July after the release of its fiscal 2017 result.

Not only was the analyst praiseworthy of the result, but he expects RSG will beat fiscal 2018 guidance of 300,000 ounces. Indeed, the company has a track record of under-promising and outperforming, and it wouldn’t be surprising to see Allen’s estimate of 318,000 ounces being closer to the mark.

Wellborn took over the reins of RSG in mid-2015 when its beaten down share price was tracking in the vicinity of 25 cents per share. Fifteen months later the company’s shares hit an eight year high of $2.35, handing shareholders a capital gain of more than 800%.

However, it should be noted that historical data in terms of earnings performance and/or share trading patterns should not be used as the basis for an investment as they may or may not be replicated. Those considering stocks in these markets should seek independent financial advice.

Welborn’s industry experience, as well as his knowledge of doing business in overseas jurisdictions has been instrumental in driving efficiencies which have flowed through to improved production and a much healthier balance sheet. As at June 30, 2017 the company had $290 million in cash, bullion and listed investments and group net operating cash flow from its Ravenswood and Syama operations was $152 million.

This is in stark contrast to the position the company was in when he took over, and represents a $320 million turnaround in net debt over the past two years.

However, RSG’s shares have declined since last year’s peak, leaving Welborn somewhat perplexed. He highlighted the fact that on so many measures the company has outperformed its peers with a sector leading return on equity of 20%, and yet it continues to trade at a significant discount to its Net Asset Value.

As the following table demonstrates, the company also trades at a significant discount to its peers based on gold reserves, resources, production, and EBITDA.

Notwithstanding the share price performance, he highlighted the group’s strong institutional shareholder support which includes large global funds such as Oppenheimer Funds, Baker Steel Capital Managers and IFM investors. With two projects in Africa and one in Australia RSG tends to be better understood by Northern Hemisphere investors.

When Welborn is away from the mine site he spends his time between Perth and London. Having witnessed the strong show of support he received at the previous year’s London Mines and Money conference there is no doubt that investors in Europe and North America not only ‘get’ the story, but they have a good deal of confidence in Welborn’s ability to achieve that 500,000 ounce per annum goal.

An overview of producing assets and growth prospects

The following provides some background on RSG’s history and its current operations. The company is an experienced explorer, developer, and operator, having owned and managed nine gold mines across Australia and Africa which have produced circa 8 million ounces of gold.

RSG currently produces from two mines, the Syama Gold Mine in Africa and the Ravenswood Gold Mine in Australia, and is one of the largest gold producers listed on the ASX with FY18 guidance of 300,000 ounces of gold production at All-In Sustaining Costs of AUD$1,280/ounces (US$960/ounces).

Resolute’s flagship Syama Gold Mine in Mali is a robust long-life asset comprising parallel sulphide and oxide processing plants. The move to underground mining is expected to extend the mine life beyond 2028.

The Ravenswood Gold Mine in Queensland demonstrates Resolute’s significant underground expertise in successfully mining the Mt Wright ore body, where operations are expected to cease in FY18. The company’s next stage of development in Queensland is the return to large scale open pit mining at the Ravenswood Expansion Project which will extend the mine life for a further 13 years to at least 2029.

In Ghana, the company has completed a feasibility study on the Bibiani Gold Project focused on the development of an underground operation requiring modest capital and using existing plant infrastructure.

Welborn is particularly confident about the future of the Nafolo prospect. There was a potentially game changing development at the start of 2017 with outstanding drilling results being achieved at the Nafolo prospect, located adjacent to the 8 million ounce Syama deposit. 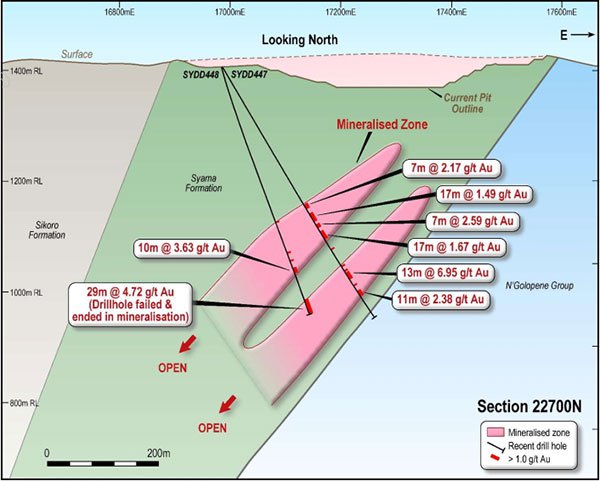 This has the potential to transform the Syama operations, as all drill holes have intersected gold mineralisation, while there are substantial untested areas to the south and at depth. Furthermore, the deposit remains open in all directions.