ASX gold stocks have no doubt taken a hit in the last few months, with the price of gold dipping to a 19-month low just a few weeks ago.

The gold price, now sitting around US$1192/oz, has taken a dive since April this year when it was up around US$1356/oz.

At the same time, and unsurprisingly, we have seen many ASX-listed gold stocks suffer in turn. Anova Metals (ASX:AWV) is down 72% in the last six months, and Alicanto Minerals (ASX:AQI) is down 66% in the same period. Even the $2.1 billion-capped St Barbara Ltd (ASX:SBM) is down some 8.6% in the last three months.

But there are small cap gold explorers on the ASX who aren’t faring as badly as you may think, upon a closer look.

One such company is the gold-focused metals play, GTI Resources (ASX:GTR).

Although it remains a speculative stock and investors should seek professional financial advice if considering this stock for their portfolio.

While the small cap’s share price has slipped in the last few months, along with many of its gold peers big and small, a closer look at comparisons show that it has done quite well all things considered.

The micro-cap has outperformed not only the Comex Gold Futures index (GC) but also the S&P ASX 200 Gold index (XGD) since September 2017, as shown in the first chart below. In the same period, GTR also managed to outperform $1.6 billion capped WA gold giant Saracen Minerals (ASX:SAR), albeit with more volatility as is expected from a small cap. 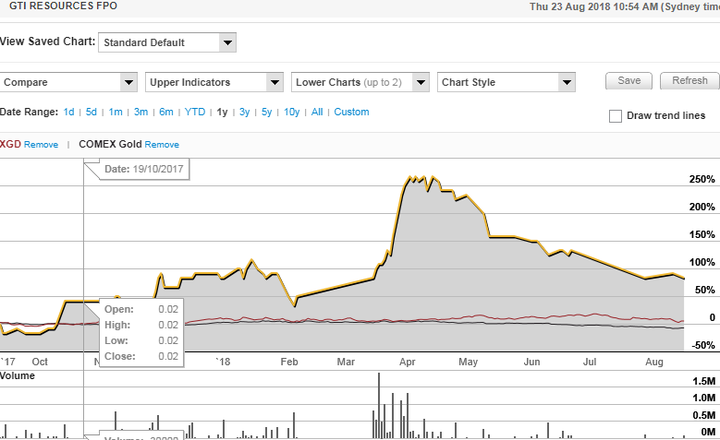 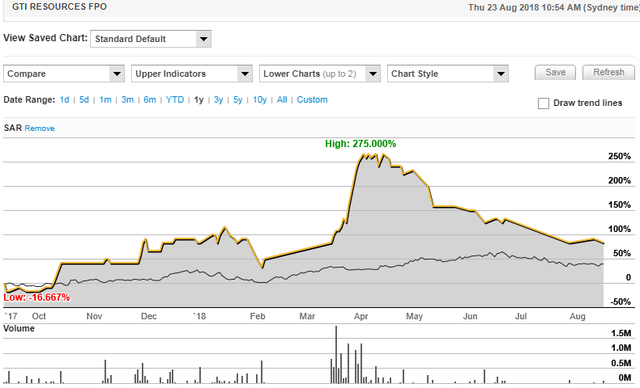 SAR is a gold standard player on the ASX, with an annual production of over 300,000oz per annum.

Its production comes from two WA projects, Carosue Dam Operation and its Thunderbox Operation. Both operations boast not only an extensive mine life, but potential for further exploration — and are located in WA’s Eastern Goldfields.

Which is exactly where GTR is looking to source its gold.

In July the company reported on its flagship Meekatharra Volcanic Massive Sulphide (VMS) Project in WA. The Meekatharra Project (E51/1556) is located ~55km south of Meekatharra in the Eastern Goldfields of WA, and is underlain by a sequence of mafic and felsic volcanics, which host a number of VMS base metal prospects and deposits within and adjacent to E51/1556.

GTR has been busy reprocessing available geophysical data and is set to commence on‐ground exploration at the project, targeting VMS-style base metal mineralisation. This includes the Austin VMS deposit, located within an excised licence in the southern‐central part of the project area, and the Murchison Wonder, Tasman and Flinders prospects to the northeast.

Over the last five years, the US dollar gold price has remained fairly flat, trading around the US$1100/oz mark — only ever moving about US$200/oz above or below that price. 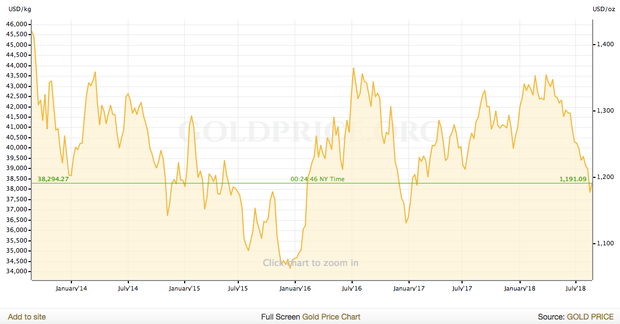 With the US gold price slide since March/April, history would suggest we are now in for a price uplift or plateau, rather than a further slip. That said, many see a further slip as a definite possibility.

If there is a rebound in the gold price, small caps like GTR could quickly make back lost ground.

For a junior like GTR, its prospects or fundamentals aren’t what has changed in the last four months; like a whole swathe of other gold companies on the ASX, its share price has taken a hit due to negative sentiment plaguing the sector.

Consequently, when that changes, as it inevitability will, GTR could be ideally situated to return to its April high of $0.044 — which was an impressive 266% premium on its mid-September 2017 share price of $0.012.

Speaking of where GTR is situated, the small cap is fighting its battle for gold junior survival in one of the most prospective gold spots in the country; WA’s Eastern Goldfields.

A resurgence for WA’s goldfields

With a rich history of gold-mining in WA, the state is still known for the abundance of cash and jobs made possible through prolific mining in the region.

There are currently over 40 active gold mines in WA including big producers like the Telfer mine in the Pilbara, the Jundee gold mine in Wiluna and the Kalgoorlie super pit gold mine.

No doubt the Eastern Goldfields are seeing a renewed interest in recent years. Those with their hands on the right tenements, whether they be blue chips or micro-caps like GTR, are determined to continue WA’s golden run, regardless of the ups and downs of the US gold price.