Airbnb to IPO, Apple and Tesla investors get ready for stock split … and keep your eye on Calima Energy

If there is one industry that should steer clear of on IPO during COVID-19 lockdowns and restrictions, hospitality would be the number one contender.

Tell that to Airbnb.

Of course, Airbnb is a technology company. Much like Uber isn’t transport, even though its primary function is to transport people. It too, is tech.

Airbnb hasn’t been immune to the hospitality downturn, so it does seem a strange time to IPO. It would certainly rub the noses of the 25% of Airbnb staff that was laid off in May.

Brian Chesky, president and founder of the peer-to-peer rental platform said of the 7,500 employees worldwide who were let go, "we are collectively going through the most painful crisis of our life".

Airbnb’s bookings were down 90%. It was forced, like many businesses, to downsize.

At this time Airbnb revised its expansion plans, scaled back its investments in hotels and paused its transportation projects.

It seems the tide has turned for Airbnb, possibly because it is tech and, in that way, is somewhat better shielded from the plight many hospitality businesses are currently facing.

The company will IPO without having yet disclosed any financial information or specifying how many securities would be put on the market.

According to eToro markjet analyst Antoine Fraysse-Soulier, “It is true that the IPO of this Californian "Unicorn" has been in the pipeline for several months, if not several years, but the coronavirus pandemic, which has caused a collapse in global tourism, has thwarted its plans for listing on the Nasdaq.

“Indeed, Airbnb should achieve in 2020, revenues of 2.2 billion dollars, against 4.8 billion last year and, according to the Financial Times, its valuation would have fallen by half in the past year, bringing it back to $18 billion.”

Bloomberg’s Olivia Carville, puts it down to three reasons:

From an analyst’s point of view, Fraysse-Soulier says, “Airbnb has realised the strategic shift to adopt to restart the activity, focusing on its core business: rental between individuals. There is therefore no longer any question in the short term of diversifying by targeting the transport sector or hotels as previously discussed.

“In June, the first effects were felt thanks to the restart of short stays and close to customers' homes, particularly in France, one of its main markets in the world. However, a resurgence of the pandemic and mistrust of both landlords and tenants despite the health standards that Airbnb has established, could thwart the rebound in activity that began three months ago."

Airbnb has reigned in spending, it has facilitated more than 100,000 new guests in the US as city dwellers take advantage of remote work and head outside city areas.

According to e-commerce research company Edison Trends, consumer spending in July at Airbnb was 22% higher than the year before.

As Carville writes, “Investors are hoping that Airbnb’s ability to adapt to the various crises of 2020 will make a compelling pitch to the public markets, and set it apart from the IPO scrum.

“There’s unprecedented demand for tech companies from retail investors and Airbnb is a very recognisable name; people know it like they know Coca Cola,” said Zach Aarons, an Airbnb investor and co-founder of the venture capital property tech firm MetaProp.

Now it’s just a matter of stopping the parties that trash people’s houses and give, on occasion, Airbnb a bad reputation.

Some analysts predict Tesla and Apple shares could soar by more than a third in the year after their upcoming stock splits.

eToro analysis of historical data has focused on the share price movements of the 10 biggest global brands that have carried out a share split including Apple, Alphabet (Google), Microsoft, Amazon, Coca-Cola, Disney, Samsung, McDonald’s, Toyota and Intel.

Their analysis shows that mega brands see their shares rise by an average of 33 per cent in the year after a stock split. Apple is splitting its shares for the fifth time and it is the first split for Tesla.

Electric car maker Tesla and technology giant Apple will carry out stock splits on 31 August that will reward shareholders with extra shares.

Typically, companies conduct a stock split in order to reduce the price of their shares and therefore make them more attractive to potential investors.

According to the trading platform, while this is the first time Tesla has conducted a stock split, it’s widely expected to boost the attractiveness of its shares, which will likely go from nearly $2,000 a share to around $500, at current prices.

Interestingly, here is a historical look at stock splits and companies’ performances thereafter: 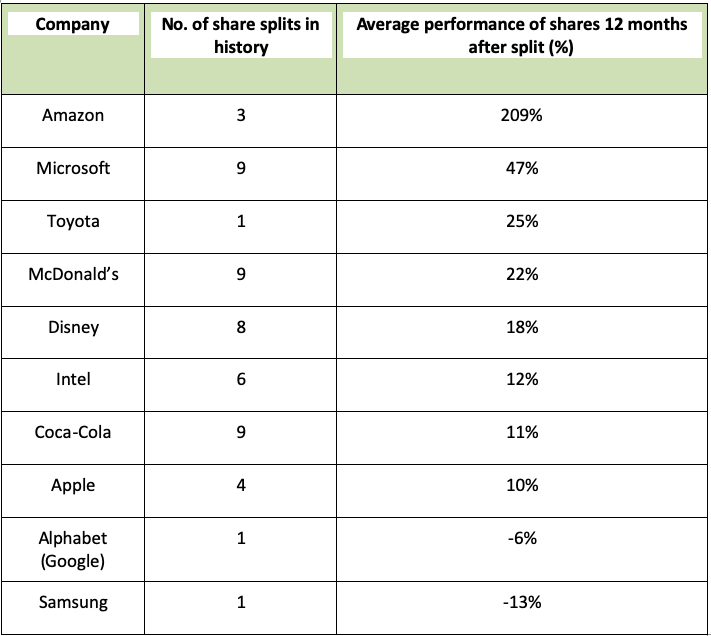 Josh Gilbert, analyst at eToro said: “Tesla and Apple are two of the most talked-about stocks by investors around the world. Their stock splits are generating a lot of interest, especially with the huge increase of retail investment into the market this year.

“After announcing their splits, we have seen surges in trading volume on both stocks as well as a rise from both, with Tesla and Apple both climbing approximately 47 per cent and 30 per cent retrospectively.

“If we look at the historic data shown from some of the big names that have performed stock splits over time, we see in the 12 months following that their share price increases. Although past performance is not a guide to future performance, Apple and Tesla clearly feel their stock splits will generate similar results.

“Although the stock split doesn’t make any difference to the market capitalisation of the stock, it is more of a psychological factor for retail investors. Going off current values, Tesla’s share price will be reduced to around $400, which may seem much more attractive to investors than its current price of $2000, as it may be viewed as more accessible for individual investors.

“Fractional share trading is obviously now an important part of investing, but the price of a stock can still play a factor. Emotion is a big part of investing and investors will often feel that a stock with a lower share price has more growth potential than one with a higher price.

“If we continue to see increased interest from retail investors as eToro has witnessed since the stock splits were announced, both Apple and Tesla could extend their bull runs.”

Calima was up as high as 28.57% on Friday as investors cotton on to its potential in Canada’s onshore Montney Formation, the most active oil and gas play in Canada.

Calima Energy Ltd is the only ASX listed company with Montney acreage and owns more than 60,000 acres (100% working interest) in the Montney Formation in north-east British Colombia. It is currently sitting back watching the M&A Activity in full flight.

In July 2020, ConocoPhillips entered the Montney consolidation race by acquiring a large portion of Kelt Exploration’s Montney position in a C$550 million transaction, equating to a valuation of $2,000 per undeveloped acre.

In August 2020 Canadian Natural Resources (CNRL) announced the acquisition of Montney producer, Painted Pony for C$469 million, of which C$350 million was assigned to Painted Pony’s existing debt. This equates to a valuation metric of ~C$2,500 per developed acre.

Could Calima be next in line for an acquisition?

The company was busy this week, having completed its technological integration with Canadian based NuraLogix Corporation paving the way to sell the parties’ CompleteScan application to their prospective clients and current partners.

Earlier in the week, MYQ announced the release of the Bearn application (Bearn) with MYQ integration, which is now available on both the Apple App Store and Google Play Store.

“The launch of Bearn has been highly anticipated by both MyFiziq and our shareholders as MyFiziq will receive $2.00 for every scan performed by the users.

“This release is our largest to date, and Bearn’s founder Aaron Drew has actively expanded the business partnerships over the last 12 months, partnering with global organisations that now offer more than 25 million potential users of the combined platform.

“Together with Bearn, we have gone the extra mile to release both iOS and Android simultaneously to maximise outreach across this enormous audience,” MYQ CEO Vlado Bosanac said.

The best performers in the ASX top 100 stocks include Reliance Worldwide up over 31 per cent, Cleanaway Waste Management up over 13 per cent and Worley Limited up over 8 per cent.

The worst performers were Whitehaven Coal down over 27 per cent, APA Group and Aurizon Holdings both down over 6 per cent, Treasury Wines Estates, Crown Resorts, The Star Entertainment Group and Ampol all down over 5 per cent at time of writing on Friday.

According to Wealth Within’s Dale Gillham, “To understand the Australian stock market right now, we need to look at what has happened over the past few months. When COVID-19 hit, world markets fell heavily in the fastest technical bear market we have seen in history, which resulted in the All Ordinaries Index falling 39 per cent in 22 trading days. From the low on 23 March, the Australian market rose 42 per cent over 53 trading days to a high of 6,314 points before falling away over 4 days and around 7 per cent. Over the past 53 days, the market has only risen 8 per cent to of high of 6,310 points so far this week. In short, without meaning to be repetitive, the Australian market is going nowhere.

“One thing I know for sure is that if confidence is high, price rises strongly for a significant time but when fear rules, prices fall heavily. Right now, confidence is low, as we are constantly hearing news about the uncertainty of world economies and our future, so indecision is ruling. While the market will pick a direction soon, unless we can get more certainty and confidence, it is more likely that the direction will be down in the short term.”