As the global population continues to soar, demands placed on basic necessities will continue to rise, particularly food.

We all need to eat food right?

The United Nations forecasts that the global population will reach 9.7 billion people by 2050, from the current 7.3 billion.

Think about it for a second, that’s more than 2.4 billion people being added within a generation. We have never experienced such exponential growth before in recorded human history: 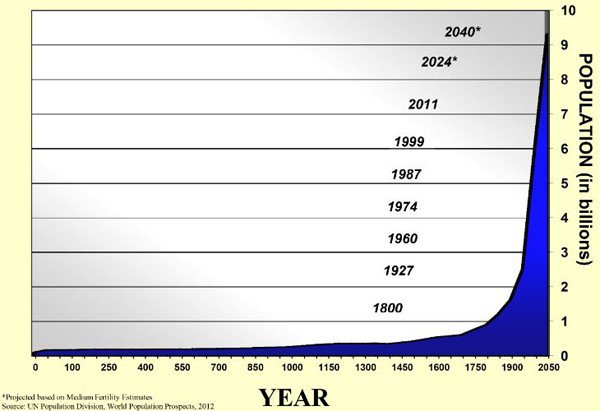 Coupled with rising incomes causing changes in dietary consumption, the global grain output will need to increase by 50% and meat output by 200% to meet the estimated global demand by 2050.

With populated countries such as China and India experiencing a surge of citizens joining the middle class, these figures may be conservative in terms of future food requirements.

All this is set to occur whilst at the same time soil quality around the world is on the decline.

Simply supply and demand logic tells us that if this trend continues we will likely see prices for various agricultural commodities increase in the coming years and therein lies an opportunity.

What can you do about it?

For investors looking at this sector, it may be worth gaining exposure to the agricultural industry such as potash, phosphate and fertilizer and the players in it such as ASX listed Brazilian player Aguia Resources (ASX:AGR).

AGR is an early stage play so investors should approach with caution and seek professional financial advice if considering the stock for their portfolio.

Speaking geographically, Brazil has the world’s largest available unused arable land, more than the next two countries, United States and Russia combined. Further to that, Brazil has the most renewable water in the world, another commodity vital in food production.

So another option for people looking to enter the sector may be to buy agricultural land and become a grower of food yourself.

That’s a pretty difficult thing to do, but if looking at smaller scales you could start your own garden in a bid to reduce your grocery bill, as current trends suggest that food prices will continue to soar in line with global population growth and the emerging middle class.

Finally, it may just be a good time to revisit some old episodes of Burke’s Backyard, fans would know that in itself is a mighty fine investment.