There is no better recipe for success than under promising and outperforming. Australia’s largest motorcycle dealership operator, Motorcycle Holdings (ASX: MTO) has done just that since listing on the ASX in late April with an IPO price of $2.00.

Only three months later management upgraded prospectus profit guidance by between 10% and 15%, which at the midpoint of that range represented an increase from $6.9 million to circa $7.8 million. 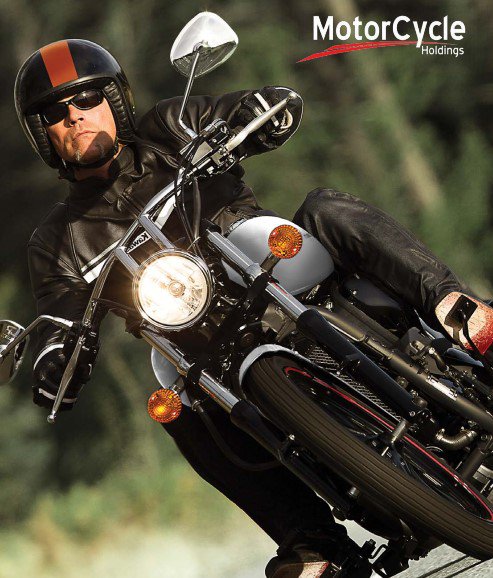 The company went on to announce a fiscal 2016 net profit of $8 million at the end of August, prompting Josephine Little from Morgans CIMB to upgrade earnings per share forecasts for fiscal years 2017 and 2018, while increasing the price target from $3.54 to $3.65.

However, at that point the company was trading at $3.76 and consequently a hold recommendation was maintained. It has since hit $4.00, but with broader market weakness resulting in a pullback to $3.75 perhaps it is a stock to reconsider given its strong blend of organic growth and potential earnings accretive acquisitions which aren’t currently factored into earnings projections framed by brokers.

It should be noted that broker projections may not be met and investors should seek professional financial investment advice. Further to this previous trading patterns are not an indication of future share price movements, and as such shouldn’t be used as a basis for investment.

As a backdrop, MTO was founded 27 years ago and is Australia’s largest motorcycle dealership operator with 34 franchises operating out of 24 dealership locations in Queensland, New South Wales and the ACT.

The company sells both new and used motorcycles as well as distributing parts. It also generates income from services, repairs, finance, insurance and warranty products. 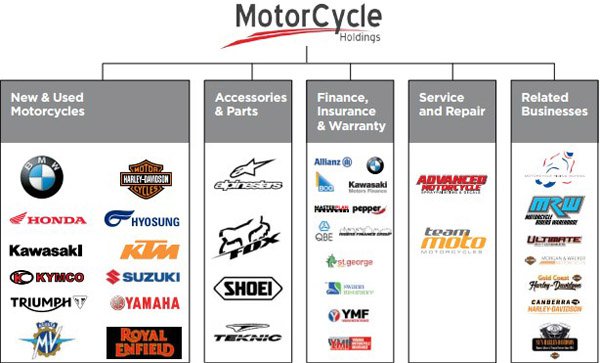 MTO’s strategy is to grow its dealership business both organically and through acquisitions. The capital raised in the IPO will assist the company in accelerating growth beyond the levels it has historically delivered as it takes a more aggressive approach to acquisitions.

However, it is worth noting that even prior to listing, the company generated compound annual pro forma EBITDA growth of 10.4% between fiscal 2013 and fiscal 2015.

Comments in last week’s annual report indicated that newly acquired dealerships were generating strong revenues and that continued growth should stem from acquisitions and through the group’s established network.

There is definitely substantial scope for acquisitions with 700 motorcycle dealerships across Australia and only two operators other than MTO owning more than four dealerships. This indicates the highly fragmented industry is ripe for consolidation.

As the company was only listed for a period of two months prior to the end of fiscal 2016, it didn’t undertake any acquisitions during that period but management said it is confident that opportunities will arise in the current year that meet its strict acquisition criteria.

On this note, in fiscal 2017 the company has already acquired new franchises in Queensland, MV Agusta and Royal Enfield, both of which are growing boutique brands with incremental sales potential.

The following table demonstrates the consistent industry growth that has occurred in the sector over the last 12 years. 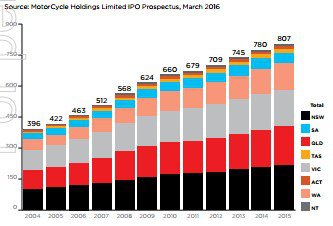 Josephine Little highlighted two potential acquisitions that would have a material impact on earnings. Peter Stevens is the second largest motorcycle dealership group in Australia, operating 14 outlets across eight locations with the majority located in Victoria. In the past, the group was the only Harley-Davidson importer in Victoria, however it now operates six of the 42 Harley Davidson dealerships in Australia.

Importantly, MTO isn’t represented in Victoria. Consequently, the acquisitions of the Peter Stevens business would provide access to a totally new market.

The other group that could come into play is Fraser Motorcycles which Morgans said was the third largest motorcycle dealer in Australia with four dealerships in New South Wales. The business also has one point of representation in both Melbourne and Perth.

It should be noted that previous trading patterns are not an indication of future share price movements, and as such shouldn’t be used as a basis for investment. Also, broker projections may not be met and investors should seek independent investment advice in relation to any of the companies mentioned in this article.